Store Page
Transport Fever>  Workshop > PrivatePinguin's Workshop
This item has been removed from the community because it violates Steam Community & Content Guidelines. It is only visible to you. If you believe your item has been removed by mistake, please contact Steam Support.
This item is incompatible with Transport Fever. Please see the instructions page for reasons why this item might not work within Transport Fever.
Current visibility: Hidden
This item will only be visible to you, admins, and anyone marked as a creator.
Current visibility: Friends-only
This item will only be visible in searches to you, your friends, and admins. 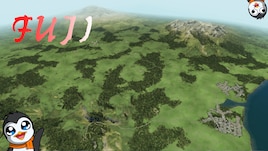 This item has been added to your Subscriptions. Some games will require you to relaunch them before the item will be downloaded.
In 1 collection by PrivatePinguin
Pingus TF Mods

It is based on the region around the Fuji in Japan near Tokio and contains 20 cities as well as 7-8 of each industrial building.
The goal was to create a realistic looking 1:3 map which is long enough for planes and wet enough to use boats.


*** IMPORTANT ***
You have to activate the experimental map sizes ... because it is huge :D

You do that by going to your Steam folder > userdata > (your ID) > 446800 > local, opening settings.lua and editing to make "experimentalMapSizes = true".

Btw. this map is in beta. Try it and give feedback :3

Also it is HIGHLY recommended to use my mod "Fuji Vegetation" to make the map look better! (like on the pictures)
It can be found here: https://steamcommunity.com/sharedfiles/filedetails/?id=1388253040

Stop by on my streams on Twitch if you want :P
https://www.twitch.tv/privatepinguin

Nitricx Oct 4, 2018 @ 4:22pm
After playing from 1900 to 2020 with 4x time mod i could say the map was engaging. Only had small problems connecting the towns between mountains in the center and stablishing a not so complex Tools and Machines delivery system around fuji. +10

PrivatePinguin  [author] Oct 3, 2018 @ 6:22am
@klaureij Thank you :) I uploaded the heightmap to the pictures and hope that will help.

klaureij Oct 3, 2018 @ 5:19am
Very nice maps, thank you! Is it possible to share an image of the maps from above? Like a Google Maps satelite picture.