Store Page
RimWorld>  Workshop > Atlas's Workshop
This item has been removed from the community because it violates Steam Community & Content Guidelines. It is only visible to you. If you believe your item has been removed by mistake, please contact Steam Support.
This item is incompatible with RimWorld. Please see the instructions page for reasons why this item might not work within RimWorld.
Current visibility: Hidden
This item will only be visible to you, admins, and anyone marked as a creator.
Current visibility: Friends-only
This item will only be visible in searches to you, your friends, and admins. 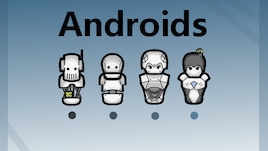 APurpleApple
Online
See all 16743 collections (some may be hidden)

This mod does work with old saves but will not spawn the new android faction unless a new game is started. Otherwise should work as normal

This mod merged with Android Tiers++ made by ARandomKiwi, as such - all the features from that expansion have been added into the base game.

This mod aims to add several tiers of sentient android colonists, robots, mechs and other features. In an attempt to vastly extend late-game colonies.


Surgery on androids works differently than that of humans, requiring high crafting. The chance of success can be found within the stats of every pawn. Under the "work" section.

Mech-Fall Transmitter: This is the orbital targetter needed to spawn the M7 Mech. It can be obtained from item stash quests and traders, similar to the way other orbital weapons are gained.

The Fractal Enhancement: A special pill developed by ancient archotech societies, when consumed by an android it will increase almost every useful stat per each use. However if a human consumes it they will convert into a fractal mutant.

Android Assembly Kits: These kits are useful for setting up colonies as they are only a fraction the weight of the android they can be assembled into, able to set up wherever and whenever.

Swarm Mortar: A Mortar filled with several small drones that will attack any hostiles on sight, can be made once T2 Android research is done.

SkyCloud: Allow to digitize and store your colonists minds in supercomputers, from which you can control your entire colony.

(T5 Can only be obtained via the [A Strange Crash] Event)

Summary: a very quick, strong cybernetic dog even without upgrades. Useful for quickly taking down attackers without sending colonists out.

Summary: Named after the process that this machine performs; extracting the small amounts of metal absorbed by plants, refining it and expelling it in the form of long, spindly strands on it's back and neck.
This faux wool can then be used to make resistant clothing or be refined into steel at an electric smelter.

Summary: produces nutrient solution, a form of artifical milk that holds twice as much nutrition as it's counterpart; actual milk.

Summary: every 2 days will dispense up to 5 capsules at once, these capsules contain semi-refined resources within them that can either be further developed into chemfuel or neutroamine at a drug lab or refinery.

Special thanks to:
Uplinked for helping write backstories. More info on him can be seen HERE [uplinked.portfoliobox.net]
Trunken for making the workshop page look beautiful with his preview images.
Hohen for help with 1.2 Patches

To benefit from the latest fixes, download Android directly from Github: https://github.com/Atla55/Android-Tiers-Core/archive/refs/heads/master.zip
Popular Discussions View All (203)

I can't find a way to fix the Voice Synthesizer on my androids.
Swag Jutsu
< >
5,564 Comments

GuGGiTz 13 hours ago
Issue with Royalty Mod, Once you reach Praetor rank you no longer have a UI bar at the bottom.

Tested with only this mod and using Development tools

I can take some screenshots if anyone needs to see it.

FG_Remastered Dec 7 @ 1:37am
@Blanck7 They are the android equivalent to hospital beds.

@Gakko Dafuq are you talking about? The M7 called by the Mech-Targeter is supposed to be temporary. If your M7 Surrogate has this hediff however, that is a bug and needs to be removed through devmode. T1 and T2 are weaker than humans but easily replaceable. T3 are equivalent to humans and T4/T5 are superior. Given the correct upgrades, they are invulnerable.

Gakko Dec 6 @ 8:41pm
The SM-7 exploding because of "battery" is the most useless thing i've ever seen in a mod, not to mention all the other droids break down faster than a toilet paper under rain. Will avoid this like the plague.

Blanck7 Dec 6 @ 6:08pm
what the hell is the purpose of the upgrade station

FG_Remastered Dec 6 @ 4:11pm
@X-Samir Al Hyde That item does not exist. What were you trying to do?

@Zyphrwynd Known bug, but the devs are absent atm. :/

Zyphrwynd Dec 6 @ 3:25pm
With this mod enabled Eltex clothing/weapons and other things that affect Psychic Sensitivity do not work on humans.
Also added a comment to the issue on the Github thats been open since September.

FG_Remastered Dec 6 @ 8:35am
@WeebCactus HAR has been a little buggy recently. Have you tried resubscribing to that mod?

@Mcquizzy The Fractal enhancement creates mental breaks by default. You can hop on our discord server where I uploaded a patch for that.

Mcsqizzy Dec 5 @ 1:24pm
is it normal for an android without the intolerance trait, max mood and max fractal medicine to have mental breaks.

I do not have dubs breaks mod installed.
< >