Greenlight > Concepts > Shadow Cube's Workshop
Greenlight is being retired. For more information on how to submit games to steam, refer to this blog post.
This item has been removed from the community because it violates Steam Community & Content Guidelines. It is only visible to you. If you believe your item has been removed by mistake, please contact Steam Support.
This item is incompatible with Greenlight. Please see the instructions page for reasons why this item might not work within Greenlight.
Current visibility: Hidden
This item will only be visible to you, admins, and anyone marked as a creator.
Current visibility: Friends-only
This item will only be visible in searches to you, your friends, and admins.
Memory of Soul
Description Discussions0 Announcements5 Comments17 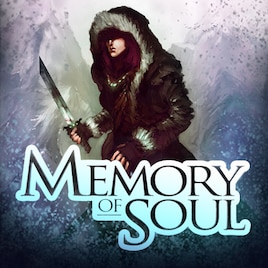 Shadow Cube
Offline
See all 13 collections (some may be hidden)
Recent Announcements View All (5)
New Promo Art in the Gallery
November 7, 2013 - Shadow Cube

Two weeks ago[memoryofsoul.com] we published new screenshots, showed first time on Lodz Game Summit[gamesummit.pl]. Now you can find new promo art[memoryofsoul.com] in our gallery. First one, depicting conflict between two important nations in the game, was also presented during our speech at LGS. Second one, with Technomage, is making its debut today. Enjoy and let us know what you think!

Our gallery - this way please![memoryofsoul.com]

Yesterday Shadow Cube gave a short speech about Memory of Soul at Lodz Game Summit[gamesummit.pl] - a conference devoted to cooperation of IT companies, universities and governors of the city of Lodz within the game dev industry. We are happy we could be a part of this event, as Lodz is the city where Shadow Cube was born.

What is more, we presented there two new screenshots from our game, which for the first time show the open air location - Eirath village and its outskirts. You can check them out in our gallery[memoryofsoul.com] - enjoy! We are waiting for your feedback. :)


There are numerous theories about how the Membranes came into existence. One spiritual, one corporeal – two inseparable halves of our world. According to texts written by an ancient civilization which used to inhabit these lands, they were created by the Watchmaker – a being in which everything both begins and ends.

The Ancients worshipped him as their god, but he refused to protect them against the might of the ages – their advanced civilization vanished almost entirely during a cataclysm that covered the world with ice. Only scattered remnants of their glory remain, in the form of texts and ruins discovered by those who came after them.

The ancient civilization had been replaced by two new cultures, both of which still exist. The first are Frost Bears, warriors from the high mountains, who above all value strength and courage. The second – Technomages – are constructors of magic-powered machines and devices. Both civilizations remain on civil terms with one another.

The tension, however, is rising constantly. Magical crystals, mined by both sides, are an extremely rare, but more and more widely used resource, and they begin to turn into a bone of contention which may become the cause of an open conflict.

All of this is being observed by the Seers – humans blessed with an extraordinary gift. They see not only the corporeal world, but can also turn their gaze to the other side – the world of spirits.

This is a story of one such person…


Memory of Soul is the first project of an independent studio called Shadow Cube – a group of passionate students dreaming about telling their own stories through the rich medium of video games. With our meager resources, having only the time between our classes or after work, we decided to tackle the genre which has always been seen as unsuitable for debutantes - we began to create an action RPG game. Along the way, we decided to include into our game elements from detective adventure games and dungeon crawlers.

The main heroine is Meira – a talented Seer – one of those able to look into one’s soul. With the help of her unusual skills she makes a living as a detective or, sometimes, as a mercenary. One day, she receives an unexpected letter from her old mentor – he cannot stop thinking about the mysterious death of his friend. The old man has a feeling it was not an accident. At his request, Meira comes back to the village she grew up in to uncover the mystery of the seemingly natural death. Perhaps that event was just a cover-up for a deeper intrigue?

It is you who, with the help of your sword, magic, and a pinch of detective zest, will have to find the answer. During your adventures you will not only explore the frozen world of the game, but also look for clues and talk with witnesses. Who knows, maybe you will find that the village hold much more mysteries than you thought…

What is the current development stage of the game?
The game as a whole is completely planned, and some parts of it are already finished, but it is still quite far from being complete.

When will we see a video with gameplay?
We are sorry there is not one yet, but at the moment gameplay is in the early stages of development – first prototypes are just beginning to appear. It may be a while until we decide to show something specific. We are grateful for you patience and understanding.

Why did you put the game on Greenlight so early?
We were encouraged by the description of the service. We wanted to know, what Steam users – one of the biggest gamer communities in the world - think about our work. We thank you for your honest critique and your interest. We are happy that many of you liked our vision of the game. We will try to keep you informed about our progress – we can’t wait to see what you think.

What kind of game will it actually be?
It will be an action RPG game focused on storytelling and atmosphere building. The main protagonist is a specific character (the player cannot change her appearance), whom the player will see in Third Person Perspective (there will be no option of using First Person Perspective). The gameplay focuses on talking with NPCs, looking for clues in key locations using the detective mode, combat and exploration. We are doing our best to balance all the elements so that they put diversity into the main goal of the game – following the plot.

The adventure will be linear, with a partially open world – the main quest consists of a series of missions, during which we can complete one of the sidequests. The game world consists mainly of the small area around the village, but we also have several aces up our sleeve. The explorable area gets more and more extensive as the game progresses. In specific places, where it is required by the plot, the detective interface will appear, which will be based on looking for clues. The game will resemble a bit a point-and-click adventure game with a TPP view in this mode.

Combat will be based on attacking an enemy like in an action game – every attack requires the player to press a button. We developed our own system based on customizable attack trees and doing combinations by alternately using your sword and magic, but we will tell more about it when it is properly tested.

Information above is very general, but we hope that we will soon be able to show you something more detailed.

Where can I find the latest news about the game?
On our official website (http://www.memoryofsoul.com) and on Facebook (http://www.facebook.com/MemoryOfSoul). Please remember that our team focuses mainly on working on the game. Updating the website is not our priority, but if we have something to announce, it will appear there.
< >
17 Comments

SweetFishsticks Jun 27, 2014 @ 12:51pm
The Library ^^
This art style reminds me a bit of the witcher series, but I can't wait to see where they take it. The concept is a really good one.