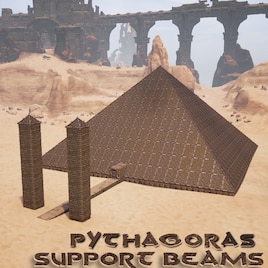 Sunday
Offline
See all 985 collections (some may be hidden)

This item has been added to your Subscriptions. Some games will require you to relaunch them before the item will be downloaded.
Description
Description of Mod
Mod id: 1382183303

Pythagoras Support Beams is a mod that allows players more freedom for building pillar-less designs into their bases and bridges. The support beams carry infinite stability as long as it's initial stability source is above 0. If you want a very long bridge without super long pillars, or maybe you want a high ceiling, both of those are excellent examples of where this mod excels.

Originally part of the main Pythagoras mod, this mod was separated out due to the PvP imbalance this mod can cause.

Highlights
Features horizontal beams for every tier, while offering normal and short versions depending on if you are connecting to a Wedge or Normal Ceiling. Here's the full breakdown:
Every mod piece has a unique Icon to help you identify it as a Pythagoras piece.

Multigun  [author] Oct 30 @ 11:20am
I am unable to provide support on Steam. Please post to discord with detailed screenshots and reproduceable instructions on your issue.

And again, I am unable to do ANY mod updates, at all, for an undetermined amount of time.

[Tribe] Eldin89 Oct 30 @ 10:29am
I am seeing support being lost and supports no longer functioning after a server restart. Any fix for this or is it a hidden effect of 2.1?

SMooreAce Oct 29 @ 7:27pm
No it doesnt. It runs fine with that mod running

Doc Holliday Oct 29 @ 6:57pm
FYI: I got it to load without the game crashing. Haven't tried to create/making a beam yet..

Please visit the discord for the latest information. And please, do not ignore this message and spam the workshop comment section to "update the mods."

Multigun  [author] Oct 28 @ 11:31am
This mod likely works fine. The dedicated server app is reporting things as out of date, even if they were updated today.

Just like Gportal before it, saying a mod is "out of date" doesn't mean it doesn't work.

As I posted on discord, I am NOT able to do ANY updates due to my computer hard drive failing. Please be considerate of that.
< >