Store Page
Transport Fever>  Workshop > Cadoras's Workshop
This item has been removed from the community because it violates Steam Community & Content Guidelines. It is only visible to you. If you believe your item has been removed by mistake, please contact Steam Support.
This item is incompatible with Transport Fever. Please see the instructions page for reasons why this item might not work within Transport Fever.
Current visibility: Hidden
This item will only be visible to you, admins, and anyone marked as a creator.
Current visibility: Friends-only
This item will only be visible in searches to you, your friends, and admins. 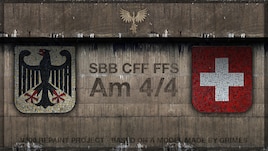 Cadoras
Offline
See all 35 collections (some may be hidden)

This item has been added to your Subscriptions. Some games will require you to relaunch them before the item will be downloaded.
Description
Introduction
The second repaint of the fantastic model made by Grimes. In 1986 the Swiss
State Railways (SBB CFF FFS) bought 7 locomotives of this type from the German
State Railways (DB). They were used all across Switzerland for freight- and
constructionwork. Unfortunately, like their brethren, they proved to be already
used up in the late 80's and without a (significant amount) of spare parts or
donorlocomotives the spent more time in the shed then on the track. In 1997
all of them were retired.

IMPORTANT
This repaint needs the original V200 made by Grimes in order to run. Sub-
scription isn't enough, you have to load the actual model ingame.

Progress
When I've got the time I post updates on my projects on this site:

Disclaimer
The repaints are not meant to resemble the real deal in exact detail,
so historical inaccuracies are inavoidable.

No part of this repaint may be used without my permission.
< >
1 Comments