Store Page
American Truck Simulator >  Workshop > SiSL's Workshop
This item has been removed from the community because it violates Steam Community & Content Guidelines. It is only visible to you. If you believe your item has been removed by mistake, please contact Steam Support.
This item is incompatible with American Truck Simulator. Please see the instructions page for reasons why this item might not work within American Truck Simulator.
Current visibility: Hidden
This item will only be visible to you, admins, and anyone marked as a creator.
Current visibility: Friends-only
This item will only be visible in searches to you, your friends, and admins. 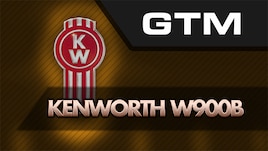 3 items
Description
During 1982, Kenworth introduced the W900B as a replacement for the W900A. While largely distinguished by its introduction of rectangular headlamps, the W900B underwent further modification. To further accommodate increased engine cooling, the hoodline was raised, requiring the cab to be mounted higher on the frame.

Since the introduction of the W900B, Kenworth has introduced two variants of the W900. In 1987, the W900S was introduced, adopting the sloped hood of the T800. In 1989, the W900L was introduced as a longer version, extending the BBC from 120 to 130 inches. Initially produced as a limited edition (to commemorate a W900's appearance in Licence to Kill), the W900L went from becoming a limited edition to a full production vehicle.
W900B then took the place of "the workhorse". Shorter wheelbase and overall bigger grill allowing for more efficient engine cooling allow the B model to fit into more diverse scenarios.

ExpressToast Nov 16 @ 4:06am
be nice to have the flat top coffin sleeper addon ... please .. wish i could send you a pic of my truck but im kinda new lol ish

Benthetrainkid Nov 8 @ 12:09am
You should add the flat top sleeper cab configuration

That's awesome, do you have a link for it?

Dazzo Nation Aug 10 @ 3:00pm
there's a fix version on scs forum that works with the current version, just gotta do some digging

neededlotus5 Aug 9 @ 10:14pm
sisl the creator now works for scs and has no time to update his mods including his magnum opus the real companies trailer mod which is a shame because the game really needs a fuel tank version and nobody seems interested in creating one

+Zoom Jul 28 @ 2:59pm
this mod is abandoned because the last update was in 2020 and has many errors on game.log.txt
i hope authors are safe at least and they can back or someone take it and update this mod

TNZfr Jul 27 @ 5:56am
Yep, I confirm that the lights are too powerfull with my W900B.
All others things are just great !

s.vanbrocklin Jul 10 @ 5:41pm
I don't know if it is just me but all GTM trucks have bugged lights. The light are way too bright. Please fix this. All GTM trucks are awesome though.