Store Page
War for the Overworld >  Workshop > Shocky's Workshop
This item has been removed from the community because it violates Steam Community & Content Guidelines. It is only visible to you. If you believe your item has been removed by mistake, please contact Steam Support.
This item is incompatible with War for the Overworld. Please see the instructions page for reasons why this item might not work within War for the Overworld.
Current visibility: Hidden
This item will only be visible to you, admins, and anyone marked as a creator.
Current visibility: Friends-only
This item will only be visible in searches to you, your friends, and admins. 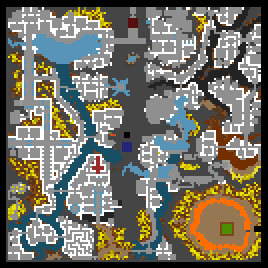 Shocky
Offline
See all 12 collections (some may be hidden)

This item has been added to your Subscriptions. Some games will require you to relaunch them before the item will be downloaded.
Description
"Welcome to Icey Peak, Underlord. It looks like Iriana has completely lost control of this mountain a long time ago, because Empire are entrenced all way up the mountain sides. Better have your wits about you while climbing up to the throne room, otherwise you will have nasty accidents..." (1 player scenario)

There is a lot going on under the hood in this map, quite a few quests, secrets, scripts etc. Can't really say to much without going full spoilers. Should be bugfree, but if you find something odd or a bug do tell. Save often for this map is long brutal journey, but hey you start relatively comfy.

CHECK IF YOU ARE ABLE TO SAVE, VALIDATE THE GAME IF NOT. NEW BUG WITH 2.0.7 VERSION OF THE GAME

V2. Updated 29.05.18
It has been reported quite a bit, that players experience crashes halfway out in the map, in the southern sections around the maze.
V3. Updated 23.05.19
Fixed the arcane lib. q and remade the fog of war limiter. Other issues of save game corruptions I can't do much with since they are engine related. Made the other underlords quiet.
V4. Hotfix attempt at patrol triggers.
V5. Waves should be working again, along certain other triggers. Added some voice lines to Lord of the Land etc.
V6. Mutations to the map should be working again, waves were not following the patrol given in editor, reassigned them again.
V7. Put in a few more voice lines when wave timers come about (early and late). Tried to iron out last of the bugs, but it's hard due editors nature of breaking something everytime map is loaded.
V8. Same as above, reworked timers structure to try bypass editor bugs.
V9. Same as above.
V10. Same as above, made waves timebased only. Updated 24.05.19

Shocky  [author] Oct 26 @ 2:20pm
Might have some settings tweaked differently? Brimstone should be possible to blow up normally one way or another. After digging bit. It's a long time since I played so maybe things have changed how it works.

It could be netered in the obsession mode, but right after the door theres a brimstone wall, that should be blasted away by the bomb.
Crackpot didn't helped :(

Shocky  [author] Oct 7 @ 8:18am
Oh my lord (of the land) !
Well I guess the game think you are that good and you needed some additional challenge. :D

Prophy Oct 7 @ 7:47am
Good level! But I think something went a little wrong [i.imgur.com] with the scripting at the end... :D

loganjamesalex Jul 8, 2019 @ 7:20am
So the first gatewa y is completely surrounded by sacred ground and is also indestructable, that is the one I am talking about. I figured out the hallway thing was just because I loaded a save of the level instead of starting from scratch tho.
< >