Store Page
Stonehearth >  Workshop > BrunoSupremo's Workshop
This item has been removed from the community because it violates Steam Community & Content Guidelines. It is only visible to you. If you believe your item has been removed by mistake, please contact Steam Support.
This item is incompatible with Stonehearth. Please see the instructions page for reasons why this item might not work within Stonehearth.
Current visibility: Hidden
This item will only be visible to you, admins, and anyone marked as a creator.
Current visibility: Friends-only
This item will only be visible in searches to you, your friends, and admins. 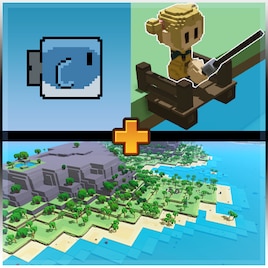 BrunoSupremo
Online
See all 1375 collections (some may be hidden)

This item has been added to your Subscriptions. Some games will require you to relaunch them before the item will be downloaded.
Description
Adds a Fisher class (works in any biome), the fisherman profession will fish in specific locations and fishing zones.
Adds the Archipelago biome. Vast ocean, dotted with tropical islands. Has new items, plants, mobs, campaign, templates...

If you liked this mod, take a look at my other mods too: https://steamcommunity.com/id/brunomussoi/myworkshopfiles/?appid=253250

Fisher
New job for any kingdom. Requires you to place fishing zones or docks where they will stand while fishing.
Can also capture crabs and harvest oysters. Have a few craftable items.

Storage
Fish rack (fish will be displayed hanging, optional as fish can be stored in any food stockpile)
Fish stall (same as the rack, but bigger)
Fish container (a crate that can only store fish)
Pearl container (crate only for pearls)

Biome
The archipelago biome is a group of tropical island in the middle of the ocean. Aside from the unique terrain shapes, there is also custom trees, plants, animals, etc...

Plants
Dranden and smalea trees (basic big and small trees chopped for a lot of wood)
Papaya and coconut trees (can be harvested for their respective fruits, and after being fruitless can be harvested like normal trees, i.e. chopped for wood)
Seaweed (silkweed variation growing under the shallow waters, harvest for fibers)
Hibiscus (big pink flower harvestable for herbs, also have a rarer blue variant)

Mobs
Cocoling (takes the role of entling enemies)
Octopus (weak, but has long range and area attacks)
Oysters (high defense enemy, not to be confused with static harvestable oysters)
Jellyfish (can shock and paralize)
Turtles (as non interactive ambient mobs)
Crabs (on the shores, appears in other biomes when summoned by the fisher crab traps)
Other mobs are usually reskinned with a tropical theme, like colorful birds or beach party goblins

New crafting recipes
Every crafter has at least one added recipe. (Fisher items already mentioned above)

Carpenter
Fisher bucket (the talisman tool used to promote someone into a fisher, can also be acquired through an event on the first days)
Ship wheel (common in ships, just decoration)
Tiki torch (light source)

Engineer
Cocobomb (An explosive proximity trap made from a coconut)

Farmer
Palm trees (not exactly a crafting recipe, it is a new tree crop option in the farms)

Herbalist
Lei (hangable flowers)
Palm, papaya, hibiscus and seaweed seeds (uses their harvested resource to create seeds that can be planted to multiply the plants)

Mason
Totem (three animals, turtle, crab and seagull, stacked on top of each other)

Templates
Tropical houses and structures.
Ship templates (they are still just solid blocks, i.e. static.)
Fisher house for each vanilla kingdom (i.e. playing with Rayya you have a rayya-like fishing house, while Northern A. has a fishing house in their own style too)
Popular Discussions View All (5)

BrunoSupremo  [author] Jul 8 @ 5:09pm
Pearls are harvested by fishers from oysters, which appear only in the archipelago biome.

SureAction Jul 8 @ 6:11am
i dont know how to find pearls and couldnt figure out.. can anybody explain?

BrunoSupremo  [author] May 18 @ 2:59pm
Something may be blocking it. Try to help with some side ladders.

cjisaac5037 May 13 @ 10:29am
Citizens will not install the fishing Docks, everything else works fine. This mod used to work fine

BrunoSupremo  [author] Mar 17 @ 6:45pm
It is like any other decoration. You pick a place for it and wait someone deliver that there.

Traveller Mar 16 @ 8:53am
how do you get your fisher to place a crab trap? I ordered the placement near the shore and further away, neither were placed.

BrunoSupremo  [author] Jan 6 @ 3:35pm
As the game goes, citizens do simple tasks only, not related to food production. Fishing upgrades happens with level up, like faster fishing.
I will try the cooked crab.

mankol Jan 4 @ 6:40pm
can you add cooked crab to both the cook and fisher?

mankol Jan 4 @ 5:44pm
can you make that worker that are not haul,mine or build do fishing instead of standing around?
to help feed the town?
can you add a fishing boat and some fishing upgrades like a net for more fish per use?
< >