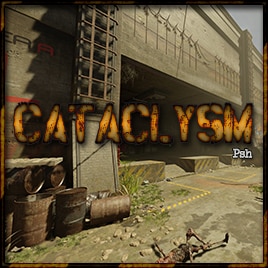 raptroes
Offline
See all 1197 collections (some may be hidden)

This item has been added to your Subscriptions. Some games will require you to relaunch them before the item will be downloaded.
Description
The Essex heavy industrial plant was conceived at the height of World War II. During which time it produced all means of weapons, from bullets to tanks. It's location next to the ocean made it critical to the supply and delivery of Allied armor. Not long after, the factory became abandoned for several decades. In the early 21th Century, the factory was repurposed as an all purpose shipping yard, but only after a few years was bought back by the Government and once again used as a hub to produce and ship weapons. The last report from Essex indicated a shipment might have exploded while at the compound. Communications with Essex have ceased after this Cataclysm.

If you enjoy my work, you could donate here ;D

Small Targets: 20, spawn out of 60 locations randomly each game
- Give 1000 points each
- Every 4, increases perk limit for all players by one
- After 5: Free Perk Drop
- After 10: Double Points becomes Triple Points
- After 15: Pap Powerups Spawn
- All 20: All perks awarded and kept throughout the game.

*4 Player might act weird at times.
Popular Discussions View All (6)

dabby Jan 27 @ 2:40pm
its not bad but it makes me question whether im bad at zombies or its just difficult

Existential Pineapple Jan 23 @ 9:02pm
This map is huge and like a maze, the zombies are numerous and as fast as lightning, the weapons are impossible to count but be warned, this is not a challenge for the feint of heart. You will die, you will be pushed to the limit, but you will feel what a true zombie apocalypse would be like. As much as I recommend this fantastic work of a free piece of content, be warned for what lay ahead, because it wont be easy or like anything else you have ever played before.

dabibi Jan 19 @ 10:11am
might be one of the shittiest maps i have ever played the souls cant be taken and the map is fucking trash

TheKirBoi Jan 7 @ 6:13pm
what kind of fetish makes you include napalm zombies in every single goddamn map you make?