Store Page
Arma 3 >  Workshop > Aplion's Workshop
This item has been removed from the community because it violates Steam Community & Content Guidelines. It is only visible to you. If you believe your item has been removed by mistake, please contact Steam Support.
This item is incompatible with Arma 3. Please see the instructions page for reasons why this item might not work within Arma 3.
Current visibility: Hidden
This item will only be visible to you, admins, and anyone marked as a creator.
Current visibility: Friends-only
This item will only be visible in searches to you, your friends, and admins. 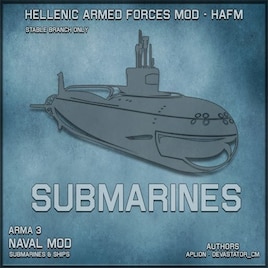 This item has been added to your Subscriptions. Some games will require you to relaunch them before the item will be downloaded.
In 1 collection by Aplion
HAFM NAVY (Ships & Submarines) Collection

4 items
Description
This is version 2.0 of a completely working Submarines set for ArmA 3.

A long time effort for a MilSim part that I believe that was missing from this game and which would not been possible to be achieved without my friend Devastator_cm which did all scripting dirty work on it.

On this mod you will have the opportunity to complete use some of the main Submarines stations as Commander, Weapons Officer, Sonar Officer, Driver, as well to use it as Cargo for your missions.

These Submarines are capable to shot Torpedoes, Harpoon Missiles, Cruise Missiles and Decoys in order to defend themselves.

Also there are scripts that control AIs behavior, in case Submarine is controlled by them, as even new waypoints and EDEN attributes in order to help the user more.

This mod is coming with an Operations Manual which is a "must" for user to read prior use the mod.

On this stage the mod persisted by 4 submarines, 3 of them are on NATO side, 2 on Independent side and one on OPFOR side.

Some of them have more capabilities that others and everything is explained in manual.

Generally I'll not write much more for this mod, I'll let you try it and see what can be offer to ArmA.

Again, all credits goes to Devastator_cm for his work and to BIS for the game.

NOTE: just one of these Submarines but with same usage and everything else, is into Devastator_cm "DEVAS_TAF" mod for Turkish Forces.
NOTE 2: No permission for retexture or any change to models and scripts of this mod it is given to anyone. Only permission to include it AS IS in servers is permitted by the authors.
NOTE 3: This mod needs the CBA addon in order to work (dependency).

Required addons/mods for either Submarines or Ships:

Copyright 2018 [Aplion, Devastator_cm] This item is not authorized for re-uploading on Steam, except by its own authors.
Popular Discussions View All (10)

Phantom Raven May 17 @ 11:11am
thank you aplion, I did "Read" the manual but by read I mean I hit ctrl+F and typed in "rearm" and found nothing.

Iranian Giga Chad 6000 Apr 23 @ 5:32pm
Author might want to address the fact his mod can cause hearing damage before this gets taken down.

Aplion  [author] Apr 23 @ 12:29pm
@IAMspEeDex ... I'll try to communicate with Devastator which is the coder of this mod. I can't do anything else as he stop developing for the moment.

IAMspEeDex Apr 23 @ 7:44am
@Aplion yeah the manual says weapons are controlled by weapons officer, but thats not the case. The COMMANDER controls EVERYTHING, the driver controls depth, the weapons officer nothing, and the sonar operator controls nothing aswell. These custom controls are only visible from the commander. I posted about that aswell and nobody responded

NordicSkald Apr 22 @ 10:37pm
how do I fire the torpedoes and missles? i have only been able to press buttons with the commanding officer's fire control, but not the weapons officer. it makes aiming impossible. what is the intended way to do this?

IAMspEeDex Mar 31 @ 2:27pm
so for some reason, in commander seat i can do everything, driver can control depth, and the rest of the seats are useless for me, something wrong or it is me?
< >