Store Page
Kenshi>  Workshop > Shidan's Workshop
This item has been removed from the community because it violates Steam Community & Content Guidelines. It is only visible to you. If you believe your item has been removed by mistake, please contact Steam Support.
This item is incompatible with Kenshi. Please see the instructions page for reasons why this item might not work within Kenshi.
Current visibility: Hidden
This item will only be visible to you, admins, and anyone marked as a creator.
Current visibility: Friends-only
This item will only be visible in searches to you, your friends, and admins. 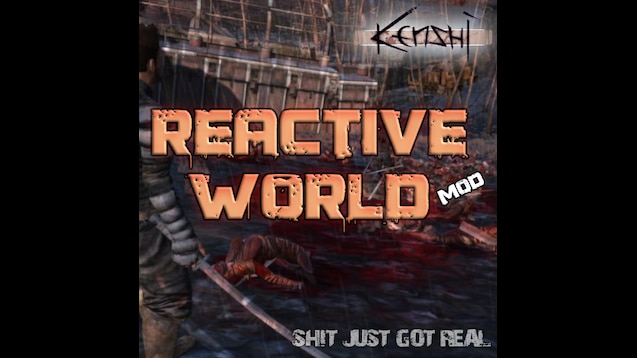 Shidan
Offline
See all 4436 collections (some may be hidden)

This item has been added to your Subscriptions. Some games will require you to relaunch them before the item will be downloaded.
Description
This mod is dedicated to filling out the areas left lacking by the dev's world reaction systems. Be it adding effects to locations and factions that got none, or adding more detail to certain vanilla ones.

Now includes a world state checking character in Waystations to help with debugging issues with world states triggering. As well as a character spawner to find those bugged NPCS, map to it also at Waystation bars.

Now uses Rustled's Unique Settlement Placements at its base. This will significantly improve compatibility with other mods that do the same, and should barely affect the user gameplay wise. This is directly merged into the mod (with permission of course), so it is not needed to download the original, though it hurts nothing if you do. Make sure to go give him some love for his work on it! :)

-Dust Bandits having a civil war over leadership if the Dust King is taken down. Occupying nearby ruins for their HQs, and starting to have fights in the wilderness with each other. Taking down all the upstart leaders will cause the Dust Bandits to disband entirely.

-Mongrel and other locations falling to the Fogmen in certain conditions. Your actions have consequences, and sometimes the innocent will suffer due to them regardless of your intentions.

-The Western Hive going crazy if their Queen is kidnapped. They will be pushed forward by the sole drive of rescuing her, and will not have any mercy if anyone should stand in their way.

-Rebuilding The Hub under the Shek Kingdom if their forces take either Bad Teeth or Stack from the Holy Nation. Including some dialog to help guide the player on how exactly to advance from stage to stage of the repairs. Plans for rebuilding under the Holy Nation as well, once I get their conquest of the Shek in.

-Cannibals have been separated into up to 17 warring tribes. As each tribal leader is defeated they are absorbed into one of two larger more powerful tribes. If both large tribes reach full power they will launch a massive war against each other. If all chiefs are defeated, only scattered remnants will be left.

-The HN's last struggles for survival. After taking out their leaders you will be met regualr raids from the remnants of the HN, who have gathered around some new leaders of their own in hidden locations. There are bread crumbs out in the world to help you track down these new leaders, and until you do the raids will continue to strike you, no matter where you live. Once you wipe out the High Priest and his men though, the Holy Nation will be gone for good.

-The Shek rebuilding their empire in the event of success in their conflicts. Towns, villages, and outposts sprouting from the ruins in their area, as long as nobody else is around to hinder their work.

-(Coming Soon(tm)) Rebuilding the faction of Deadcat and reclaiming the Cannibal Plains after they've been cleared from cannibals.

If those sound like the kinds of things you'd be interested in, then welcome aboard. Make sure you import when adding to an existing save. Hope you enjoy! :)

Note: You should probably put this mod as low as possible in the load order, near the bottom of the list to ensure it loads last or close to it. Bugs have been known to occur when loaded before other mods that edit world data, due to the nature of how town locations are stored in the files. The main bug has now been fixed by the devs, though it's still wise to keep it low in the load order.

This mod is NOT compatible with Living World. It touches enough of the same things to break several things, and has been known to trigger some of my overrides when they normally shouldn't. Use both at your own risk!

Wiping Out The Holy Nation
creepy-streaker

Shidan  [author] 3 hours ago
@MasterOfUnicorns - I'm not aware of any conflicts, and the author of the mod seems to think it's probably fine.

@Spell13 - I don't believe there are any conflicts with those mods, no. Might be a minor one with Cannibals Expanded, in that my custom cannibal chiefs probably won't be in line with that mod's changes, but that's small.

Spell13 7 hours ago
Hello guys,
I hope someone can help me to understand if this mod is compatible with any of the following:
Cannibals Expanded, Shrieking Bandits Expanded, Hives Expanded, Crossbow Expansion and Enhanced Shopping Economy? Thank you in advance!

MasterOfUnicorns 19 hours ago
Sorry if this has already been asked, but is this mod compatible with A Forgotten World?

Shidan  [author] Nov 20 @ 4:51pm
Your own property should never get reset when a town overrides, for any town. There used to be a bug where it happened a lot, but that has long since been fixed.

Azrael Nov 20 @ 3:54pm
I'm using Hub as my main base and I'm pouring a lot of resources into it, so before I go much further if the Shek Kingdom takes the area are my houses going to be overwritten like what happens when ownership of other towns changes?

Leinadoje Nov 18 @ 6:29am
I use this mod along with Living World, it's been a staple for me in all my playthroughs but I had to uninstall after I destroyed the Holy Nation and the Flotsam Ninjas of all people took over Blister Hill despite the fact that I'm allied with the Shek.

I wish there was a way to keep that from happening because otherwise this mod is perfect. The Flotsam Ninjas are cringe.