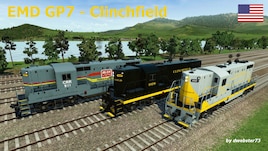 dwebster73
Offline
See all 69 collections (some may be hidden)

This item has been added to your Subscriptions. Some games will require you to relaunch them before the item will be downloaded.
Description
This mod adds Clinchfield Railroad (CRR) repaints of the generic EMD GP9 available in Transport Fever.


The Clinchfield Railroad (CRR) was an operating and holding company for the Carolina, Clinchfield and Ohio Railway (COO). It ran through the Appalachian mountian region of the United States connecting the coal mines of the region as well as acting as a trunk line through the mountains.

For many years the Clinchfield Railroad was leased jointly by the Atlantic Coast Line Railroad and the Louisville and Nashville Railroad. When L&N merged with Seaboard Coast Line in 1983 to form Seaboard System Railroad, Clinchfield was merged into Seaboard as well.

Features:
Technical Details:
Notes:
Known Issues:
Dislaimer:
Author takes no responsibility for your hardware or software. Use this mod at your own risk.