Store Page
ARK: Survival Evolved>  Workshop > a white guy's Workshop
This item has been removed from the community because it violates Steam Community & Content Guidelines. It is only visible to you. If you believe your item has been removed by mistake, please contact Steam Support.
This item is incompatible with ARK: Survival Evolved. Please see the instructions page for reasons why this item might not work within ARK: Survival Evolved.
Current visibility: Hidden
This item will only be visible to you, admins, and anyone marked as a creator.
Current visibility: Friends-only
This item will only be visible in searches to you, your friends, and admins. 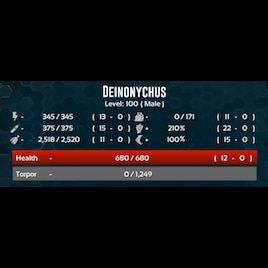 This item has been added to your Subscriptions. Some games will require you to relaunch them before the item will be downloaded.
In 1 collection by a white guy
Badd Neighbor Cluster

11 items
Description
First and foremost credit for this mod goes to steam user orionsun for making the original mod and sharing his source files to others.


How this mod differs from the original mod:
- the oxygen and food stats show up in the same order as they do in a creatures inventory screen (the original mod has them backwards)
- the melee % and movement speed % show exactly as they do in the creatures inventory screen (the original mod shows values that were 100% lower than actual values)
- the engram and item icon is more of a white color to distinguish between the spyglass and super spyglass
- some mod file names have changed causing the spawn code to change
- more file name changes to come at some point

What happens when i remove this mod from my game:
- all super spyglasses will be automatically removed from the world
- if you have it as part of a loot table from beacons or creatures they will no longer be part of the loot table

When I can learn to figure it out i want to:
- add a slim widget and a tall widget. they will be primarily used to show stat points only and take up less screen.
- instead of displaying the word male or female for gender, the species name will be blue, pink, or grey to help identify gender faster and with less clutter
- add an optional super spyglass via a config setting that can target players and structures and see their stats and tribe name
- separate all items into their own items to allow admins to disable which ones they want to allow on their server and allow custom recipes and levels for each one

At some point in the lifespan of this mod remake:
- the name of the mod will change completely to remove the association away from the original mod name
- potential names so far are "the super lens" or something silly like "the peeper" or if i branch out and make multiple items each for a specific purpose i might name the mod overall "super lens'" with individual item names based on their use like "the tamer" or "the slim looker"

mxforlife Sep 6, 2021 @ 3:14am
Is it intentionally that all popup text is blocked while the spyglass window is displayed?
Can that "feature" be turned off?

Jules Jul 13, 2021 @ 5:12am
@a white guy It was in reference to the "- the taming % is only shown when a creature is unconscious" line in the description. However, I'm happy to report that the spyglass picks up taming percentage with Immersive Taming going. Nice job!

Jules Jul 10, 2021 @ 11:03am
Nice, thanks for updating SuperSpyglass! But please consider ini options for the taming percentage, so we can track passive taming progress easily? yes the in-game tracker works, but what an obtrusive PITA lol. Spyglass is SO much better :)