Store Page
Garry's Mod >  Workshop > iosif's Workshop
This item has been removed from the community because it violates Steam Community & Content Guidelines. It is only visible to you. If you believe your item has been removed by mistake, please contact Steam Support.
This item is incompatible with Garry's Mod. Please see the instructions page for reasons why this item might not work within Garry's Mod.
Current visibility: Hidden
This item will only be visible to you, admins, and anyone marked as a creator.
Current visibility: Friends-only
This item will only be visible in searches to you, your friends, and admins. 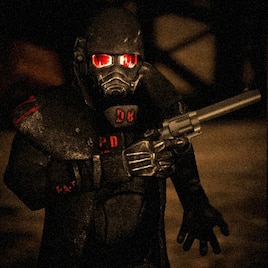 critson
Offline
See all 1973 collections (some may be hidden)

This item has been added to your Subscriptions. Some games will require you to relaunch them before the item will be downloaded.
Description
[GENERAL]

This is the communist version of the NCR Ranger-Veteran from the game called Fallout: New Vegas
The original was made for the FNV on the nexusmods site. Has black-colored coat/jeans/armor/helmet instead of original NCR colors and also some withered red initials. And the glowing eyes which looks incredibly cool in the dark :3

Souperintendent - Mod for the FNV (the armor itself)
MY NAME IS CLEVELAND BROWN - Converting to Garry's Mod
burning rage ♥♥♥♥♥ - Helping with textures
Gonzo - Great eyes idea (His addon: https://steamcommunity.com/sharedfiles/filedetails/?id=1179902731 )

I am not the original maker of this mod, all that I have done is just the glowing eyes, improved mechanics and some nice scenery for the screenshots :D

cheers, got to try doing something with it

Oh jesus hell, exactly!
Sorry because I took an idea from that
Lemme just edit the desc

it doesn't bother me if you *did*, I just wouldn't mind the credit
< >