Store Page
Surviving Mars>  Workshop > Trace Projectile's Workshop
This item has been removed from the community because it violates Steam Community & Content Guidelines. It is only visible to you. If you believe your item has been removed by mistake, please contact Steam Support.
This item is incompatible with Surviving Mars. Please see the instructions page for reasons why this item might not work within Surviving Mars.
Current visibility: Hidden
This item will only be visible to you, admins, and anyone marked as a creator.
Current visibility: Friends-only
This item will only be visible in searches to you, your friends, and admins. 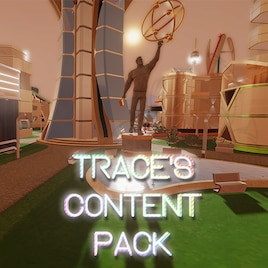 Trace Projectile
Offline
See all 35 collections (some may be hidden)

This item has been added to your Subscriptions. Some games will require you to relaunch them before the item will be downloaded.
Description
Here is my 'Content Pack' mod for Surviving Mars. It was originally released as the first cut content restoration patch, however there was only about five items added, so I've changed to adding items that I felt were missing and lore-friendly.

For now I'm mainly doing buildings, so here are three types of asset included:
1. Decorations and items that are finished but removed from the release copies.
2. Things that don't have a model, but either me or old devlogs suggest are missing.
3. Buildings that I myself added to fill gaps or add variety. Space or resource balanced.

Currently includes two cut crops (coffee, tomato), a few cut buildings (e.g. ampitheatre), and my own additions to add variety that are NOT cut content.

Most recent update, 7 Nov 2018:
- Hidden a few more buildings as I move from quantity to quality
- Fixes and stuff
- The decorative dome is DRASTICALLY better.

Trace Projectile  [author] Jul 12, 2019 @ 3:46pm
Took me a while to reply as I've been busy but thanks for the suggestions. I don't work much on this mod but it's not "dead" so I'll consider some of these, especially if I find ways to reduce menu bloat.

{Legacy} Whomst'd've Jul 5, 2019 @ 10:06am
(continued from my last comment because I ran out of space)
- Subway (smaller version of that large tunnel you can build for drones and rovers to pass through, connects different domes that're further apart together without blocking stuff like the current dome passages, maybe requiring a new tech to unlock?)
- Laundromat (consumes water and energy, but gives a decent comfort boost because clean clothes are always nice XD)
- roads/pathways (for a post-terraformed mars to connect nearby settlements, costs concrete to build and maintain, maybe some metal and electronics too idk)
- Jailhouse (outside building to contain those pesky renegades >:D, employs 10-15 (small) or 20-25 officers (large))
- Camping spot (like that decorative dome only that it can service people with the loner trait or tourists or something?)

(First off the pets add-on for this game seriously needs some fleshing out, so a few ideas for that)
- Veterinarian hospital/animal clinic.
- Pet Groomer.
- Pet Store.
- Kennel (for people working in other domes)
- Dog park (could give a comfort bonus for people with dogs?).

Some random building ideas:
- Hotels, Motels, hostels, etc (for tourists to stay in so they aren't taking up precious space that permanent colonists could be)
- public pool (eats some water but give quite a bit of comfort, would require non-specialized workers as lifeguards)
- Hockey rink (eats water and power, lessened consumption in colder temperatures or during cold waves if that could be made to work, gives quite a bit of service comfort in return)
- Sauna (helps during prolonged cold waves or on colder parts of the planet, provides minor comfort)

Trace Projectile  [author] May 16, 2019 @ 10:32pm
FYI - The mod still works, just the icons are blank for reasons I don't yet know, perhaps the game has stopped access to the default icons.

I'll probably streamline it down a tiny bit more next time I update, with the quality>quantity idea.

Trace Projectile  [author] Mar 31, 2019 @ 1:56pm
Yeah I want icons too, when I get enough time (I've been pretty much bombarded by college work for months) and interest in the game I'll edit some up.

The Photoshop file 'templates' for some reason already have items on them so editing them is more like re-drawing.

alphaprior Mar 31, 2019 @ 1:50pm
Great mod, lots of content and small size! But I still hope for icons. Even for tomato crop there is no icon but as you mention it's already in game.