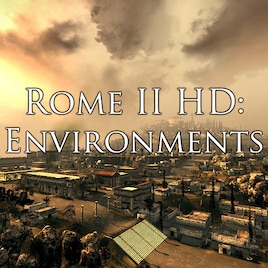 Celticus
Offline
See all 259 collections (some may be hidden)

This item has been added to your Subscriptions. Some games will require you to relaunch them before the item will be downloaded.
Description
Screenshots: These were taken with Flora HD + Pdguru's Legal Weed activated as well as Environments II at 1440p resolution (downscaled), default brightness and gamma.

Welcome to Rome II HD: Environments II. This is a refinement and sequel to the original Rome II HD Project: Environments. I felt that the old mod may still be liked and wanted by some people so I have decided to upload this brand new mod and update it so that the old one may still be around. I have recently learned to mod environment files even further which has allowed me to work on designing unique and varied weathers. This mod is similar to the old mod except for some very key differences...

- Enhanced environments for historical battles. The Siege of Carthage and Battle of Teutobourg Forest have been given special attention to get their appearance as close to the original E3 demos as possible.

-Dozens of environments added and more planned. I have added different times of day for certain environments and generally tried to make regions feel unique.

-Complete removal of the original Rome II environments. If you see any left behind let me know.

-More updates planned in the future. I will constantly be tinkering and adding new environments whenevr the creative spark hits me.

This mod is meant to be used alongside my other mods such as Flora HD, Terrain HD, and Ocean HD. These are all in preparation for the biggest mod I have ever made that isn't quite ready to reveal yet! With the new patch and DLC, I hope some of these mods will breath new life into Rome II and make the game visually updated along with its updated mechanics.

UPDATE TO PERMISSIONS POLICY: As time has gone on, I have seen the ever increasing presence of donations and patreons associated with Total War Modding. I have a personal issue with the idea of linking any type of monetary function with modding and feel it is best to have the two entirely separate. Even donating to authors for their work is too near the chance of modders locking content behind paywalls and separating paid users from unpaid ones. It is for this reason that any mod page which links or has a donation system associated with it will have to speak to me directly and ask for permission. Individual modders who wish to use these assets should shoot me a message and Ill likely give permission. Mod teams will need to discuss the use of my assets with me.

Celticus  [author] Aug 20, 2019 @ 1:43pm
The casual RP/Total War based RPG group I run is having another session! We re-enact Roman Senate sessions with dynamic events and some humor thrown in and battle for supremacy on Rome II Multiplayer! If any are interested please contact me and join here: https://steamcommunity.com/groups/Senatus_Populusque_Romanus_SPQR

EaglesVictory Jun 30, 2019 @ 5:40am
I always test with Battle of Carthage, Not good bug sun too sharp you can no longer see city do you want the best from Rome II. Needed Nvidia GeForce Intel I7 Then you can play well at the highest settings, Only switch off field depth everything else extremely extreme