Store Page
Ravenfield >  Workshop > Eddcast's Workshop
This item has been removed from the community because it violates Steam Community & Content Guidelines. It is only visible to you. If you believe your item has been removed by mistake, please contact Steam Support.
This item is incompatible with Ravenfield. Please see the instructions page for reasons why this item might not work within Ravenfield.
Current visibility: Hidden
This item will only be visible to you, admins, and anyone marked as a creator.
Current visibility: Friends-only
This item will only be visible in searches to you, your friends, and admins. 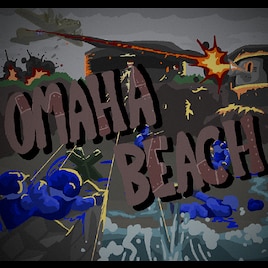 Eddcast
Offline
See all 1523 collections (some may be hidden)

This item has been added to your Subscriptions. Some games will require you to relaunch them before the item will be downloaded.
Description
Thank you for 100,000 downloads! Glad you like this map a lot.
Use Configure Flags tickbox before starting the battle, take a look at the picture to see what's the best for a good Omaha Beach experience. You can even disable the spawns at the ships and just spawn right at the beach, instant start of the battle. Use the configure flags feature as much as you can with this map, you can make several different routes for the battle to focus on.


New Update 1/26/2019, Configurable version added. People can put in their own turrets and vehicles now. Keep in mind that the default defense MGs might not be configured for the specific angle and distance to the beach. So try to use different mods and see which ones work best for bots to defend.


It is dawn on June 6th, 1944. Location is the Omaha section of the Normandy beaches, in northern France. You are about to embark on one of the most crucial battles of the Second World War. Operation Overlord, D-Day. Nazi Germany has spread insanely fast, you are to put a stop to it, with the help of aircraft and customized mortar ship support... this, however, will not be easy. They have MG42 positions all along the cliffs and hills, artillery, and powerful Fw190's. You are to get off that beach at all costs and many will get killed in the process, but it is for the future of mankind. Good Luck, Soldier.

WHATEVER DIFFICULTY IS MORE FUN TO YOU

LCVP's designed for this map are in Shiny Spiteful's Workshop Page! THEY MAY OR MAY NOT WORK, ITS DIFFERENT FOR EVERYONE. You may use other landing craft mods if you want.

RECOMMENDED TO HAVE WW2-STYLE WEAPONS ONLY, the German side already has MG42 turrets, a coastal artillery cannon, and two planes with rockets and MGs! They do not need any extra crazy weapons!

Having 50 bots or less is not recommended. As you could say this is an XL size map.

100+ bots is recommended. However, 10 or 20 less still somewhat works nicely.

EVERYTHING is different compared to the V2 Omaha.

HUGE THANKS TO THE WW2 PROJECT TEAM AND TESTERS FOR MAKING THIS HAPPEN SO WONDERFULLY.

AND THANK YOU ALL FOR YOUR PATIENCE.

PINNED: Bots not getting on MG42's or using LCVPs correctly.
Eddcast

goof May 1 @ 11:21am
people be complaining about everything fr

if your map crashes or doesn't load
THEN WAIT, it might be still loading some stuff on the map
also, if the units can't get to the beach, that means that the boats probaly didn't spawn/despawn yet

The Bearded Bigfoot Feb 6 @ 6:44am
I keep crashing into invisible things in the water.
< >