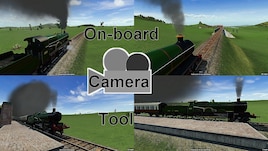 JK
Offline
See all 41 collections (some may be hidden)

This item has been added to your Subscriptions. Some games will require you to relaunch them before the item will be downloaded.
Description
Adds rail vehicles with different a on-board camera view from the game's standard.

8 invisible vehicles that when positioned at the start of the train change the on-board/Cockpit camera view. It is intended as a tool for video makers, but others might also enjoy it.

C3L - On the left, looking backwards, far back.
C3R - As C3L, but on the right. (Shown bottom left in the first screenshot.)

It only works if the camera vehicle is the first vehicle in the train.
Only one camera vehicle can be used at a time. To change the view the vehicle must be swapped in the depot or with auto replace (at a cost).

The camera vehicles have no cost and won't add significant weight or length to the train.

The camera views will intersect with objects and give stange views in some circumstances.

The positions of the cameras are always the same distance from the start of the train, so for example, one will be next to the cab of a long tender engine, but next to the back of a short tank engine.

The method used may be exploiting unintended behaivour of the game, so may not work if this is changed in the future.

Some examples of its use can be seen in this video : https://www.youtube.com/watch?v=aDnNvnAG13k&t=74
< >
44 Comments

JK  [author] Oct 27, 2018 @ 10:55am
@Aiden J - I'm not quite sure what you're asking there. To use this mod you have put the camera loco at the front of you train and only then do you get the view with Enter Cockpit (camera icon) button on the train.

Big Dave Jul 22, 2018 @ 3:34am
Thank you very much for this! I have a lovely mod of a Australian NSW Red Rattler which is fantastic in every detail but one, the modder who made it accidently stuffed up the cab camera view and apparently very hard to fix. I was devastated that I couldnt ride up front but this mod has not only made that possible but also made it better!

@Marc: Hopefully, they do something about that. I see, that they care, bringing this game forward, but they don't put so much emphasis on the little details like the lights or the announced feature of "trains can drive backwards, if they have to ability to drive in both directions".

@JK: I experimented a lot this morning and made some new camera perspectives.
Would you mind adding them to your mod?

--- LOOKING FROM THE TOP RIGHT BEFORE THE LOCOMOTIVE ---

--- EXPERIMENTAL: INSIDE PASSENGER VIEW (only works on trains with passenger seats in the first vehicle and has many clipping issues) ---


I tested all of them with this wagon in the front:
http://steamcommunity.com/sharedfiles/filedetails/?id=810193231
< >