Store Page
Arma 3>  Workshop > Phantom Hawk's Workshop
This item has been removed from the community because it violates Steam Community & Content Guidelines. It is only visible to you. If you believe your item has been removed by mistake, please contact Steam Support.
This item is incompatible with Arma 3. Please see the instructions page for reasons why this item might not work within Arma 3.
Current visibility: Hidden
This item will only be visible to you, admins, and anyone marked as a creator.
Current visibility: Friends-only
This item will only be visible in searches to you, your friends, and admins. 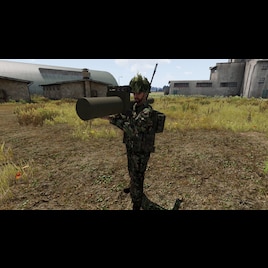 This item has been added to your Subscriptions. Some games will require you to relaunch them before the item will be downloaded.
In 1 collection by Phantom Hawk
Phantom hawks Arma 3 Addons.

Starburst is a British man-portable surface-to-air missile produced by Shorts Missile Systems of Belfast (since 2002 known as Thales Air Defence Limited). It was used by the British Army (as Javelin S15), Malaysian Army, and in the Canadian Army as the Javelin until 2005. It can be fired from the shoulder or from a launcher known as Starburst LML – Lightweight Multiple Launcher. It has been replaced in British service by the Starstreak missile.

The missile was a development of Javelin missile, retaining the Javelin missile body but replacing the radio command system with a laser guidance system. This is much more difficult to jam than the radio based system. It entered service in 1990 and replaced the Javelin by 1993. In 1992 the proximity fuze was improved. Starburst was first used in combat in the 1991 Gulf War.(info from Wikipedia)

This is designed to be used for cold war scenarios and Addons.

- Ammo box with 20 missiles and 8 launchers (look in props section in the editor).

- The Missile is what is know as a beam riding missile using a laser to paint a target for the missile to get a lock on the target it must be within the aiming crosshairs to lock on to it once fired the missile will fly to the to the target and destroy it.

- The Missile has a max range of 7km.

- It Cannot be jammed by countermeasures (though it can still miss if the target moves around to much).

- Its high speed makes it more likely to be able to intercept a fast moving aircraft.

- The guidance laser may be detected after the missile is fired, if the target aircraft is equipped with a suitable passive laser warning system. In contrast, to detect a passively guided Infrared homing missile requires MAWS detectors with significant disadvantages: radar-based closure-detecting style MAWS radiate an easily detectable signal that reveals the aircraft and may be used as an auxiliary homing signal by AA missiles, and Infrared launch signature detector-based MAWS tend to be subject to a high false alarm rate, which reduces attention paid them by the pilot.

- Battlefield obscurants, such as smoke or fog, can degrade the ability of the missile operator to see the target, and could potentially interfere with the guidance laser. This is also the case (to a slightly lesser extent) in misty or rainy conditions.

- The training level of the operator is critical since, unlike infrared guided missiles, the operator has to track the target exactly with the sighting unit aimpoint (SACLOS). If the aircraft detects the targeting laser, it has the whole period of the missile flight time to engage in avoidance manoeuvres, which adds additional challenge to the missile operator's target-tracking task.

- None that I know of at the moment please report any bugs to me if you find any.

- The launcher is made up of various models from ARMA 2 and its DLCs.

- The Faces of War Development Team Faces of war mod.

- Bohemia interactive for the base textures and models.

- Slatts for his Unfinished Bits And Bobs public model pack.

- eggbeast for his Simple O2 tutorials.

- TeTeT for his or her info on how to hide static weapon model parts.
< >
4 Comments

Phantom Hawk  [author] Mar 13, 2018 @ 4:56am
It depends the starstreak can be used on both air and ground targets the starburst is basically an upgraded javelin with the radio guidance replaced with laser guidance.