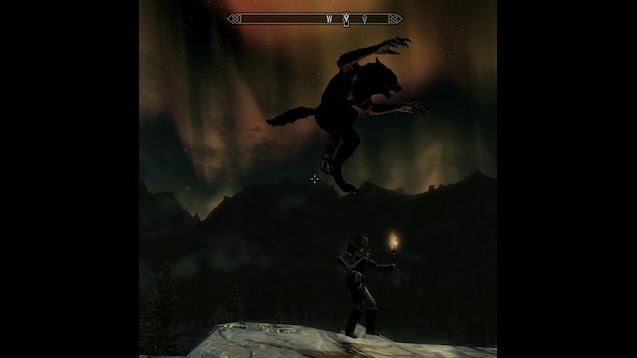 cridus
Offline
See all 50 collections (some may be hidden)

This item has been added to your Subscriptions. Some games will require you to relaunch them before the item will be downloaded.
Description
CLICK HERE FOR THE MOD'S PAGE ON NEXUSMODS[www.nexusmods.com]

THIS MOD REQUIRES "SKYRIM SCRIPT EXTENDER".
You can download it here: http://skse.silverlock.org
Follow the instructions in the ''Readme'' file.
It's a very useful (I'd say essential) ''mod'' and it's easy to install.

I MADE A VERSION COMPATIBLE WITH "Athletic Jump" by EnigmaWolf, CHECK IT OUT ON NEXUSMODS!

This mod changes the Game Settings ''fJumpHeightMin'' and ''fJumpMoveMult'', doubling their default values when the player is transformed into a werewolf. Those two settings are respectively the height of the player's jumps and the multiplier that determines how far you go with jumps.
It also multiplies by 1.5 the value of ''fJumpFallHeightMin'', so that you can jump down higher places without getting damage.
When the player turns back to normal, those settings are reset to the default values.

Misc. update: I made a version that works alongside "Athletic Jump" by EnigmaWolf[www.nexusmods.com]. If you use/want to use that mod, you have to use this specific version of "Werewolves Jump Higher and Farther". Notice that it's not made for "Supernatural Jump", that is a different version of the "Athletic Jump" mod. My mod must be loaded after Athletic Jump.

Version 1.3: Important update! Changed completely the way the mod triggers, now it's perfect and compatible with anything, even with other mods that change jump-related Game Settings (it lets other mods use their values instead of the ones it would use).
Also, now there's nothing to localize so there's only one version for all the languages!

Version 1.2: Fixed the jump height\length not resetting to default when you are werewolf and load a save in which you're not. Also fixed other little imperfections.

Version 1.1: Now the jumps will still be higher if you save when transformed, exit and re-enter the game.
Also, now the height at which you begin taking fall damage is higher, while transformed (the script now modifies also the ''fJumpFallHeightMin'' Game Setting).

With version 1.3, this mod is compatible with anything, even with other mods that change jump-related Game Settings (it lets other mods use their values instead of the ones it would use).
< >
68 Comments

cridus  [author] Aug 15, 2014 @ 2:45am
which link does it happen with? right click on it and choose "copy link" (or how it's called in english) and paste it here so I can try.
alternatively, try searching the site with google. search "silverlock.org" , it should be the first result. in the page that opens, click on "Skyrim Script Extender (SKSE): http:// skse.silverlock.org/" .

Lanky Wanky Jul 26, 2014 @ 2:09pm
when i go to download skse it always goes to different websites and when i try again it pops up again can someone help me

Jaron Kitsune May 3, 2014 @ 4:47am
Don't suppose there's a possibility of a 'lite' version? Double sounds a bit much to me. 1.5 sounds like it'd be idea for my tastes. But I'm just one random person, no need to worry about what I want if you don't want to. It'd be nice though... ^^; I'm favoriting for now though at the very least since jump height IS something that's bothered me and this seems to be the only mod that addresses that.

cridus  [author] Apr 12, 2014 @ 5:42pm
lol, I don't use nor boss neither wrye bash. I manage the mods manually.
I would tell you to install the unofficial skyrim patch, but you have many mods and it may make your life harder. it's worth a try anyway (backup the saves before and read the instructions carefully. boss behaves oddly with it, unless they updated the program in the last few months). you will find it on nexusmods.
< >