Store Page
RimWorld>  Workshop > Machine's Workshop
This item has been removed from the community because it violates Steam Community & Content Guidelines. It is only visible to you. If you believe your item has been removed by mistake, please contact Steam Support.
This item is incompatible with RimWorld. Please see the instructions page for reasons why this item might not work within RimWorld.
Current visibility: Hidden
This item will only be visible to you, admins, and anyone marked as a creator.
Current visibility: Friends-only
This item will only be visible in searches to you, your friends, and admins. 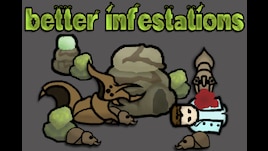 Machine
Offline
See all 2106 collections (some may be hidden)

This item has been added to your Subscriptions. Some games will require you to relaunch them before the item will be downloaded.
Description
This mod changes almost everything about infestations, the way they produce and insect behavior.

Features:
Infestations can start in most biomes, almost anywhere. The only exception is icelands. The bugs like warmer, rocky areas, preferably dark caves. If you build in a cave, that area will be less likely to get an infestation. The new dev mode draw infestation chance cell finder highlights all the areas the bugs will most likely spawn at.

Group AI for insects: When a hive spawns it will have 2 groups, 1 defending and 1 offensive. The defending group takes care of the hive. They butcher carcasses, maintain the hive, dig rock and attack intruders. As the offensive group grows in strength it will determine when to hunt and they seek out food, corpses, animals and pawns! They bring back the food to the hive for the colony workers. After the hive reproduces it will unlock more offensive groups, up to a maximum of 3 groups. All insects like to sleep during the day and are active at night.

Queens: When the defending group has spawned enough takecarers the hive has a chance to spawn a queen. The queen is another member of the defending group but has an additional job, creating more hives! Not only can the hives reproduce on their own, the queen can assist the expansion. Every few days it will journey to an area on the map to spawn another hive. The queen also gives a 30% spawnrate time reduction bonus to all the groups of the hive the queen is a member of. The hive can only produce 1 queen so if you kill it the hive loses its bonus and can't spawn another one but the other hives can produce their own queen. Multiple queens can be active at the same time.

World Map: There are insect hive colonies all over the world and some will naturally appear over the course of the game. The colonies there are matured and numerous. Sometimes you might find valuables from the corpses of pawns that strayed too close. Wiping out infestations around the world makes no difference to the infestation events however. They are intelligent but not sentient. You can also get raids from insects seeing as they are now a growing problem on the planet and they cannot be defeated, only suppressed.

The insects can surprise you. They can dig through rock to get to areas they need to hunt and are very adaptable. You can't build them in. Fires can be beaten out. They will occasionally chew your power conduits if they are near a power source. Attacking one of them draws their entire group in. They are highly aggressive. Things can spiral out of control very quickly if you don't contain them.

Compatibility: The mod hooks into the infestation incident to start things off. It is safe for already started saves, and should be fine to remove as long as you remove all the insects and hives. If you started a new game with world map insect colonies, you won't be able to visit them if you remove the mod. This mod is not to be used with any other insect modifying mods.

If you need the 1.0 version go here: steamworkshop.download/download/view/1319614331
This is not the same mod as advertised here, the 1.1 version has been completely rebuilt.

Tha Reaper Jul 5 @ 3:51am
since i installed this mod, insects no longer give me insect chitin. Also i installed this mod halfway in my playthrough, and when i loaded the game 8 hives were in a corner of the map with 4 queens, which was a bit much for my 6 man colony. i had to devmode those out

Criarino Jul 4 @ 12:31pm
I mean spawning inside your base

Criarino Jul 4 @ 12:29pm
Do this mod completely eliminates the chance of an infestation happening inside your base? Or it just reduce the chance?

Syzal Jul 3 @ 10:57am
It is compatible in the sense that they have no interaction with the other. Separate faction and faction map, separate events and units, etc. What would elevate the experience is if better infestations could use the insectoid units if both mods are loaded, as well as giving the insectoid units the hive creation behaviour. The difficulty of the insectoid bases seem to be lower? There were only about 20 units on one of the faction bases, and quite a few of them were the big and slow types. Better infestations has like 300 bugs in a hive, giving that zerg rush vibe and requiring some setup to defeat.

lolyouwish Jul 2 @ 8:36am
@Farnhain, according to the Vanilla Expanded crew, it is compatible out of the box. They don't mess with the vanilla insectoid events or options, so the two mods should work fine together.

Farnhain Jul 2 @ 6:00am
Making the mod compatible/synergistic with the new vanilla expanded insectoids would be awesome!

FightMadder Jul 2 @ 4:08am
@James Stone - if you open the mod options there's a option to turn on the notification. It seems to default to off.

James Stone Jul 2 @ 2:42am
Does this mod already warn you when an Infestation spawns? Last time I had it installed it completely failed to do so.
< >