Store Page
Dungeons of Dredmor>  Workshop > [ZG] Zandorum's Workshop
This item has been removed from the community because it violates Steam Community & Content Guidelines. It is only visible to you. If you believe your item has been removed by mistake, please contact Steam Support.
This item is incompatible with Dungeons of Dredmor. Please see the instructions page for reasons why this item might not work within Dungeons of Dredmor.
Current visibility: Hidden
This item will only be visible to you, admins, and anyone marked as a creator.
Current visibility: Friends-only
This item will only be visible in searches to you, your friends, and admins. 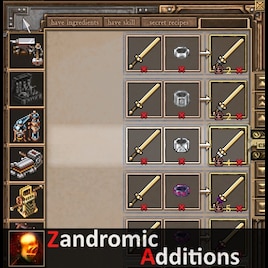 Realm of the Diggle Gods

Dungeons of Dredmor: You Have To Name The Expansion Pack

Dungeons of Dredmor: Conquest of the Wizardlands
Created by

[ZG] Zandorum
Offline
See all 5 collections (some may be hidden)
You need DLC to use this item.

This item has been added to your Subscriptions. Some games will require you to relaunch them before the item will be downloaded.
Description
(Last Updated: August 20th 2019)
(Last Touched by Dev: December 7th 2020)
(Mod Status: Break)
(Statuses: In Development, Break, Abandoned, Completed)

Zandromic Additions (ZA) intends to add balanced content to the game. I have tried to keep the stats of the items below existing items because I want to keep base game difficulty but I will obviously try to push the envelope on what you can do in the game, As I play with the mod as well as get feedback I will buff or nerf items as I see fit while adding new content. I'll be updating this semi-commonly.

Main Features:
* Ring Sword, You can attach rings to this Sword (as well as remove them from the sword but it destroys the ring) with Smithing requirements based on the Ring; When the ring is added to the Sword the Sword gains the stats and abilities of the ring. There is a different sprite for each ring so you can tell Ring Swords apart if you have multiple without reading them. If a ring has "This seems to be somewhat special." in it's description, that means it has additional random stats just like the ring that is being added to it.
* Blueprint, This rare item can be read to unlock Hidden Recipes but be warned that you shouldn't read it in combat as you get a debuff for reading for 5 turns.
* Crippled Craftsmaster, This skill is functionally all of the crafting skills merged but it makes you weaker the further you go into the skill tree.
* Wood, You can now breakdown Wooden tools and items into actual Wood then make it into other Wooden items (This fits with Meltdown/Advanced Craft & Smelt).
* Ingot Alchemy, You can now pour Potions of Steeling and Potions of Midas on ingots to change them into the related ingots (this does require a varying amount of alchemy however).

Full Feature Documentation (Out of Date as of v0.47, will update eventually):
https://pastebin.com/YX7aumvE

Notes:
* When I say "Others", I mean items that do not fit into other groups (An example being the Blueprint).
* When I say "Vanilla Recipe(s)" I mean recipes for items from the Base Game.
* If your wondering why it says ZA has potions in the tags, the game detects my Blueprint item as a Potion.
* Wooden Bolts recipe yielding so little does not make sense of course however during testing I found it was too useful being 5-12 so I lowered it to 3-10; It's still useful for makeshift quick ammo at this amount.
* This addon is a minor piece of a large expansion I've been working on for the game, pieces of it that I feel are ready for general play get added to this so be aware that if extended periods of time where there is no content added to this happen it's doesn't mean that I'm not working on it. If I ever do abandon the mod (which I don't think I will) I will make a post mentioning this (I will in addition edit the Mod Status to read "Abandoned", If I ever put the mod on "Break" and It turns into being "Abandoned" I will come back and edit to to clarify that it is).
< >
16 Comments

Amplify Jun 7, 2019 @ 11:31pm
Sword of Discovery was nice, but ultimately proved to add little of value. By the time I'd crafted that, it turns out I only had 6 recipes left in the entire game to unlock and I encountered probably another 30 bookcases after that point before Dredmor. Would probably be very nice for somebody doing smaller floors without the last 5 floors tacked on who wants a specific recipe, but somebody playing like that is probably unlikely to come across the needed materials to make one. Oh well.

Can't think of anything else to mention.

Amplify Jun 7, 2019 @ 11:31pm
Finally, finally got around to finishing my latest run, so I wanted to quickly report back before I move on to other games for a few years.

Ring Swords now show up occasionally without needing to farm specifically for one for ages, so that's nice. They're still not fantastically useful, as one or two floors after the Ring Swords start to show up Monofillament Swords with Artefact quality start dropping easily, it's just a shame that for all the crafting options in the menu related to them there's no way to actually craft one to start with in the lower floors where they would be the most useful.

Same goes for wood, though I wasn't finding much use for it beyond making a stick for another recipe and for wooden bolts for cheap backup ammo.

[ZG] Zandorum  [author] Apr 12, 2019 @ 5:21pm
I also had the Crownstar use 3 items that's recipe also are hidden so to beable to make a reliable build off of this you'd need to make or find a Sword of Discovery or get lucky with hidden recipes that you find. It's supposed to overall be something that is achieved every once in awhile as it's fairly good.

[ZG] Zandorum  [author] Apr 12, 2019 @ 5:17pm
Crownstar is a base game item, It's one of the rarest items in the game so it's more of a flavor thing that it's 10 Smithing as it should be nearly impossible to make but what it does is it's an amulet with a guaranteed 27 random stats as well as a random amount of additional stats ontop of that. It also is worth 1,000,000 zorkmids. So if you gain the recipe and 10 smithing, you will beable to somewhat easily have unlimited zorkmids and the ability to make something with a huge amount of random stats and keep making them until you get the stats you want.

Amplify Apr 12, 2019 @ 8:25am
Any clues or what have you on what the Crownstar does exactly? If I'm to invest 10 Smithing into a build I'm going to want to build my entire character around this one item / know if it's even worth doing that.

[ZG] Zandorum  [author] Apr 11, 2019 @ 6:59pm
Ok I updated it with some more Vanilla recipes, I intended to add more than this but I'm just going to put out what I have for v0.46. Please note that newer recipes (specifically triple platinum) will not be available to old saves (this is Dredmors fault), this will ONLY lock you out of making the "The Crownstar Addendum" but I doubt anyone will reach the requirement for it anyway (10 Smithing).

[ZG] Zandorum  [author] Apr 10, 2019 @ 4:06pm
The wood itself is similar to ore in rarity, it's found most in crafty craft machines as well as it's able to be gotten by breaking down things like Wooden Shields, Swords, etc.

Amplify Apr 10, 2019 @ 3:01am
Sounds cool, I've cleared out the first 9 floors on my current run and have only come across one plank of wood with nothing else from the mod. Will look forward to seeing some item variety in the future.
< >