Store Page
Arma 3>  Workshop > woesinger's Workshop
This item has been removed from the community because it violates Steam Community & Content Guidelines. It is only visible to you. If you believe your item has been removed by mistake, please contact Steam Support.
This item is incompatible with Arma 3. Please see the instructions page for reasons why this item might not work within Arma 3.
Current visibility: Hidden
This item will only be visible to you, admins, and anyone marked as a creator.
Current visibility: Friends-only
This item will only be visible in searches to you, your friends, and admins. 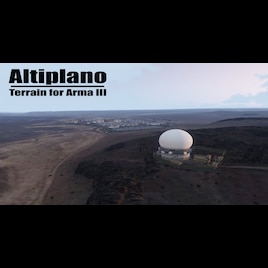 woesinger
Offline
See all 184 collections (some may be hidden)

This item has been added to your Subscriptions. Some games will require you to relaunch them before the item will be downloaded.
Description
Altiplano
by Major Desync (aka Woesinger)

Background: Altiplano is situated in the Andes along the borders of several South American nations. It is a high plateau, only sparsely populated due to its aridity and extreme altitude (at least 3,700 m above sea level).

Once the almost exclusive province of mining companies, the great open-cast pits became econonomically inviable. Their closure left abandoned mining camps and other infrastructure strewn across the high desert. These bases were soon repurposed to support the construction of solar energy plants by the Agola Corporation in an attempt to revitalise the region. Later, Altiplano came to be used for other more clandestine purposes. Regional governments constructed clandestine research installations far from the prying eyes of oversight committees or the media. Drug cartels, meanwhile, also appreciated the border region’s isolation. Their smuggling camps dot the rugged mountains and dry canyons, moving constantly in an unending game of cat and mouse with national and international drug enforcement agencies.

Recently, tensions between NATO and CSAT have led to new frontlines being drawn in the plateaus of the Andes, as each bloc backed its own proxies among the nations of South America. The old mining camps and aerodromes are now occupied by international “stabilisation forces”. Ostensibly deployed to prevent long-smouldering border disputes igniting into brush fire wars, this military build-up has only added more fuel to the pyre. As NATO and CSAT face off around the world, it takes only a single spark to set Altiplano ablaze.

Additionally, the NATO AH-9 Pawnee and MH-9 Hummingbird and the civilian M-900 lose lift and cannot operate above 4,000 m.

This addon is released under the Arma Public Licence Share Alike (APL-SA) licence.

Known Issues:
1: AI vehicles intermittently have difficulty pathfinding across road bridges.
2: Fog does not function properly. It cannot be set above 1,000 m in Eden and produces odd visual effects in Zeus.
3: Having the Alitplano mod active will make the small thorn bush clutter models on Stratis, Altis and Malden turn black. An interim fix is to not have Altiplano active if you're playing on these terrains.

Credits & Thanks:
Silola for the X-Cam mod.
Mikero, whose tools underwrite most of the the Arma modding community.
BIS for producing the Arma series.

Nico The Druglord Jul 24, 2020 @ 9:21am
Any plans on doing any future update if needed? Or give it support in case some mods are not compatible?

AeternusX Jul 23, 2020 @ 10:02pm
This is a lovely map. Has anyone else ported additional missions to Altiplano? The few I found on Steam are fun to play, but I'd really love to play Liberation or an Alive campaign on this map.

RickOShay Nov 11, 2019 @ 6:25am
This is such a good looking map - if you drop the altitude to allow all air vehicles to function properly it would be used a lot more. Perhaps you could make a second lower altitude version.

woesinger  [author] Jul 7, 2019 @ 2:57pm
@Gunmaster - it's not gravity - Arma 3 models the thin atmosphere at altitude, so some aircraft just can't operate above 3000m above sea level. Check the description for details.

GunMasterX11 Jul 7, 2019 @ 10:55am
last time i played his map it had insane gravity for planes and helicopters meaning they can't take off has that been fixed?

Alky Lee Jan 27, 2019 @ 5:28am
I've ported Hetman War Stories mission to this map. Littlebirds and Orcas can fly on any part of the map. Other transport helicopters can only fly on the lower parts of the map. I've had some great battles. The terrain is challenging in a battle scenario.
< >