Greenlight > Games > Paifu's Workshop
Greenlight is being retired. For more information on how to submit games to steam, refer to this blog post.
This item has been removed from the community because it violates Steam Community & Content Guidelines. It is only visible to you. If you believe your item has been removed by mistake, please contact Steam Support.
This item is incompatible with Greenlight. Please see the instructions page for reasons why this item might not work within Greenlight.
Current visibility: Hidden
This item will only be visible to you, admins, and anyone marked as a creator.
Current visibility: Friends-only
This item will only be visible in searches to you, your friends, and admins.
Paper Dungeons
Description Discussions0 Announcements8 Comments240 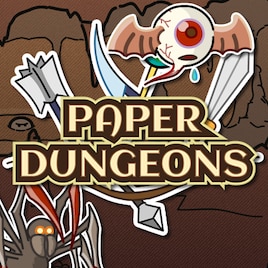 Miyu
Offline
See all 50 collections (some may be hidden)

View Paper Dungeons in the store

As you probably noticed, we've opened our new space on Steam Early Access! For this occasion, we even implemented the trading cards, with shining badges, cool profile backgrounds and cute emoticons!

Paper Dungeons is up and running, totally playable with its 3 solo modes and Online level feature (to share your own maps). It runs on PC and Linux. The MAC version will come as soon as we get our hands on a MAC to test it.

As usual, all your feedbacks are welcome! Comments, questions, suggestions? Please share on our Forums.

Paifu is working hard in eradicating the latest bugs, updating new versions and tuning the already existing solo modes, thanks to your regular inputs.
Currently, we are running on the v1.132.

First of all, a HUGE THANKS to all of you, for pushing Paper Dungeons to the greenlight!

The game is already complete and provides many hours of gameplay. We keep improving it with the valuable feedbacks of our early players. Paper Dungeons is currently on v1.12, with lots of bugs fixed and many new features. You can check our changelogs on our website[paperdungeons.net].

We are working on a more stable version 1.13, with new features: Game intro, Paper doll with stats for the fallen heroes in the Hall of Fame, some dice powers that won't be replaced anymore when you roll a new power.

With all that planned, we took a big decision and decided to release Paper Dungeons on Steam this month, through an Early access program.

The reason is that we want to push our game concept much further and implement 3 MULTIPLAYER MODES!
After all, boardgames are also fun with friends :)

These 3 multiplayer modes will be released in this order:

1) CO-OP:
Play the Adventure campaign with one of your friend. Turn by turn action with shared XP. Players have 6 action points by turn and must act before the end of a timer.

2) PvP:
1-4 players play against each other in an arena filled with monsters. Features: new type of dice set with special powers vs other classes. Rewards for players: a special currency to buy those special dice and even the normal dice sets from the single player modes.

3) D-MASTER :
1 Dungeon Master vs 1 to 4 players. Players cooperate against traps and monsters, controlled by another player posing as the Dungeon Master. The DM can unlock Monsters' dice to equip his minions.


Single player modes are not forgotten! At term, we plan to release more Puzzle levels and Steam features (Achievements, Collectible cards, Steamworkshop) will be implemented as soon as possible.
We would also love to extend the sharing levels system, with the possibility to create full story-driven campaigns, where texts and pictures will be used to introduce a group of created levels.


As you can see, we got a busy schedule ahead. I hope you feel as excited as we are!
And of course, we are keeping our ears tuned for your inputs and feedbacks!

Read More
Description
Release date: Early 2014
Paper Dungeons is a fantasy board-game mixing tactics and roguelike, boosted by online content. With the ability to create and share online your own levels, you are up for an infinite replay value. The game is visualized as a classic tabletop board game with dice and tokens structured like a dungeon crawling game with a puzzle component. You can destroy walls and auto-heal as you uncover new dungeon tiles, with 3 different and originals gameplays: ADVENTURE, PUZZLE and ROGUE.
The game will be multiplatform for Mac, PC and Linux. Even if the game presents some online features, you can still play offline.

@Slashout: From our website, which link did you click on? The Desura or the Humble Store widget?

@Kaaschuig. What is your configuration? 2D Unity games don't need much to run, and we only use simple 3D for the dice, with 1 directional light. On Wndows, the minimum requirements should be: 1Gb of ram, 512 Mo for the 3D Card with shaders 2, Direct X9 compatible.

Even if we support very high resolutions, the game also runs well in low resolutions, ie 800x600, and when the gamel launches, you can lower the game performances to use low textures.

The best way to test your configuraton with this game is to try our old Desktop demo on Jolt :
http://gamejolt.com/games/rpg/paper-dungeons-lite/22440/

Paper Dungeons has been Greenlit and is now listed in the Steam store. For the latest information, purchase options, and discussions for Paper Dungeons, please see it on the Steam Store or in the Steam Community.
Visit Store Page
For more details Visit Community Hub
For latest discussions
If you really, really want to, you can continue to the Greenlight page. Information on this page may be out of date, since all the action has moved to the areas noted above.