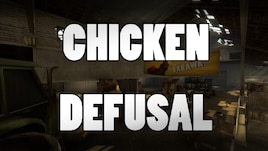 This item has been added to your Subscriptions. Some games will require you to relaunch them before the item will be downloaded.
In 1 collection by UNREAL
MilkCompany Multimod - Finest Map Selection

16 items
Description
CHICKEN DEFUSAL IS FINALLY LIVE
The mode inspired by the CS:GO cartoon trailer, created by Flashdeck animations is now available in map format! The mode was entirely built on entities and months after the first showcase video, here it is!

Initially it was projected to be a SourceMod plugin, but I made it into a map for the lack of scripters interested. There are no downsides about this, you can still play Chicken Defusal on the -now dustier- de_dust2, or cs_italy if you'd like, just some mapper will have to recompile the the desired map and apply the Chicken Defusal prefab (coming soon).

CD_BARN - CREATED BY UNREAL
This specific map was created in just a few days, maybe 2-3 days total, just to see how the mode would play. After testing with some friends for a few hours, I managed to balance and optimize the map/mode for ideally 5v5, although it should handle 10v10 or even higher.
I did not put too much work into the map itself, just enough worthy of being the very first Chicken Defusal custom map.

Along with the BSP file, will come a KV file indicating what skins are used, a CFG file, which will run all necessary configuration commands you need to play the map. If you launch the map from the WorkShop tab the process will be fully automatic, if you installed your map manually, you'll have to use the following command on console: map "cd_barn" "custom"

How it plays:
Counter-terrorists goal: Defuse the bomb on the chickens back or provide cover to your team mate defusing it!

Terrorists goal: Keep the counter-terrorists away from the chicken, the bomb explodes after a 2min period!

Round mechanics:
Popular Discussions View All (3)

how to disable terrorist boom?
TATTOTII

Chicken does not spawn with the bomb
oceanog

This is cool Map, but Bomb not moving