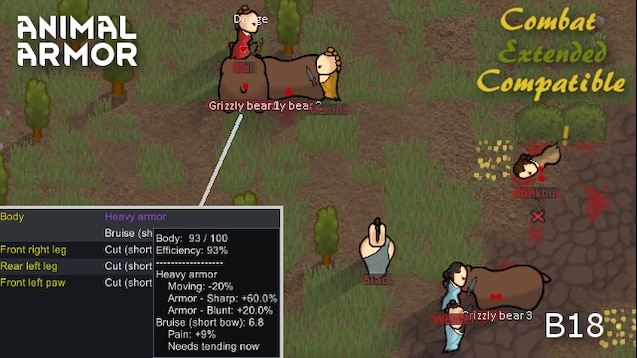 XeoNovaDan
Offline
See all 76 collections (some may be hidden)

This item has been added to your Subscriptions. Some games will require you to relaunch them before the item will be downloaded.
Description
Direct download from GitHub[github.com].

Compatibility
Compatible with Vanilla-Friendly Animal Surgery and A Dog Said and will work with either mod without any issues.

This can be used with other animal mods active, but you can't actually install armor onto them since they won't have the RecipeDefs XML patched onto them. As a result, compatibility patches will be needed to be able to armor up your penguins, thrumuffalo or whatever other modded animals you have. It'll be up to other modders to either make external compatibility patches or submit them to me so that I can integrate them into the mod Combat Extended-style.

I'd recommend using the following mods alongside this for an optimal experience:The following mods are compatible with Animal Armor:
Overview
Animal army enthusiasts, did it ever bother you that in RimWorld that you can't armor up your animals? Well, this mod allows you to do exactly so!

Animal Armor adds three variations of armor, all with differing characteristics (they all offer full-body coverage though), all three types being producible with varying levels of research - it's generally cheaper to buy them from settlements or combat suppliers than to produce them though, so bear that in mind. On top of that, you need to make sure that you get the right size of armor for your animals; 'tiny' armor for squirrels isn't going to fit on 'huge' elephants for example, and vice-versa, and this applies to other size categories too.

However, not all RimWorld animals might like being handled! As a result, when installing or removing armor, some medicine is also required to anesthetize the animal to ensure no resistance. From then on, it's impossible to fail installing armor onto an animal, regardless of how bad the doctor and medicine is.

A brief overview of all armor types:Size categories:
Powered by Harmony Patch Library.

Credits
Mehni, the real star of the show here - for tirelessly working on providing the code to get this mod to work elegantly at all! This mod wouldn't work as smoothly as it does without his efforts. The real MVP! I'd also recommend checking out his mods[ludeon.com] if you haven't done so already.

License
As is standard with my mods: you may include this mod in a mod pack, and you may derive from this, but please inform me if you're doing so either through Steam or Ludeon Forums, and give credit where credit's due.
Popular Discussions View All (1)

Flypaste Apr 18 @ 12:08am
Yeah Dan there is still a lot of value in this mod: It's compatible with everything. Meanwhile Animal Gear doesn't even work for all the vanilla animals, nevermind modded ones.

Nahtangnouv Dec 31, 2018 @ 11:17pm
Also I liked how this mod worked with a wider range of animals without having to personally go in and make armor for the animal

XeoNovaDan  [author] Nov 16, 2018 @ 1:47pm
1.0 isn't planned unfortunately due to extensive rebalancing that may need to be done, though there is a sliver of hope for a 1.0 version of this. No promises though.

Also, animal gear is honestly a superior mod to this.

✪JoJo✪ Jun 8, 2018 @ 2:45pm
Oh that's a pity. I was excited for a Carnotauro in armor.
I'll continue your work, to see if later a patch for Dinosauria or Megafuana is possible.
For now, I'll settle for an army of bears in armor.

I appreciate your response and your time. Thank you very much. <3
< >