Store Page
Team Fortress 2 > Guides > fingers's Guides
This item has been removed from the community because it violates Steam Community & Content Guidelines. It is only visible to you. If you believe your item has been removed by mistake, please contact Steam Support.
This item is incompatible with Team Fortress 2. Please see the instructions page for reasons why this item might not work within Team Fortress 2.
Current visibility: Hidden
This item will only be visible to you, admins, and anyone marked as a creator.
Current visibility: Friends-only
This item will only be visible in searches to you, your friends, and admins.

Support Scout: A Brief MvM Guide for Beginners
By fingers
This is a brief guide on how to play Scout in terms of support in Mann vs Machine. A lot of it is based on the Two Cities tour since that is where most of my experience comes from.

Comments
Loadout
Primary
Because almost any primary works for Support Scout. Feel free to use any not mentioned too. Just please avoid the red x's.

Actually no idea. Just what I tend to end up using. You know what, just use Soda Popper (see below) or something. Maybe because mine is killstreak. 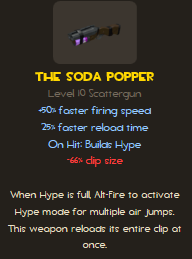 The hype allows you to draw aggro away from your team and dodge it in the air for a longer period of time. Simple as that. It's also a great Damage Scout tool but that's for another guide :smiley: 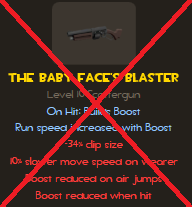 Extra speed seems great at first. You can run around even faster to get the money. However, because jumping eliminates this extra speed and even cuts it, it's terrible. You jump so much as Scout to avoid aggro and it's just a necessary part of the class. 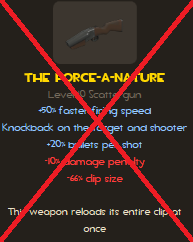 The reason some people probably consider it good is the reason I consider it bad. Knocking back can be extremely annoying. If you have a Sniper, they can say goodbye to their aim. It's not as bad as say airblast but it's still annoying. You can pit the bomb I guess, but I'm not fond of pitting strategies anyways. 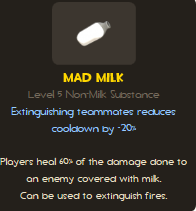 Allows you and your team to heal back a lot of health in a short amount of time. In a lot of situations even outheals a Medic. Use on Giants, large groups of robots, and bosses. Also, very useful on Super Scouts with the Slow Speed upgrade. 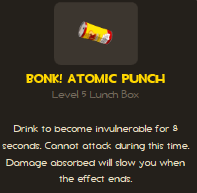 I would only consider it on early waves or waves with a lot of spam. It can be very useful for getting past a robot push to collect money that's still up front. 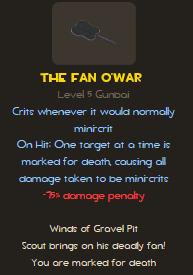 While in normal TF2 the one target mark for death isn't particularly useful, it is in MvM. Because of the presence of Giants and bosses, the one target mark for death is way more bearable. Your whole team can do mini-crits to them. No Buff Banner required. The melee is a tool for support and not damage in MvM with very few exceptions anyways. Might as well get some free extra damage. Just make sure marking something doesn't get you killed in the process.

Upgrade Path
This is the general order for how your upgrades should be purchased:

Scout's primary role is to collect the money, and you must stay alive to do so, therefore resistances will assist you in doing that.

Uber canteens are another option if you're having trouble staying alive to collect the money, although it shouldn't be too difficult if you have resistances and are dodging with your speed and jump buffs. 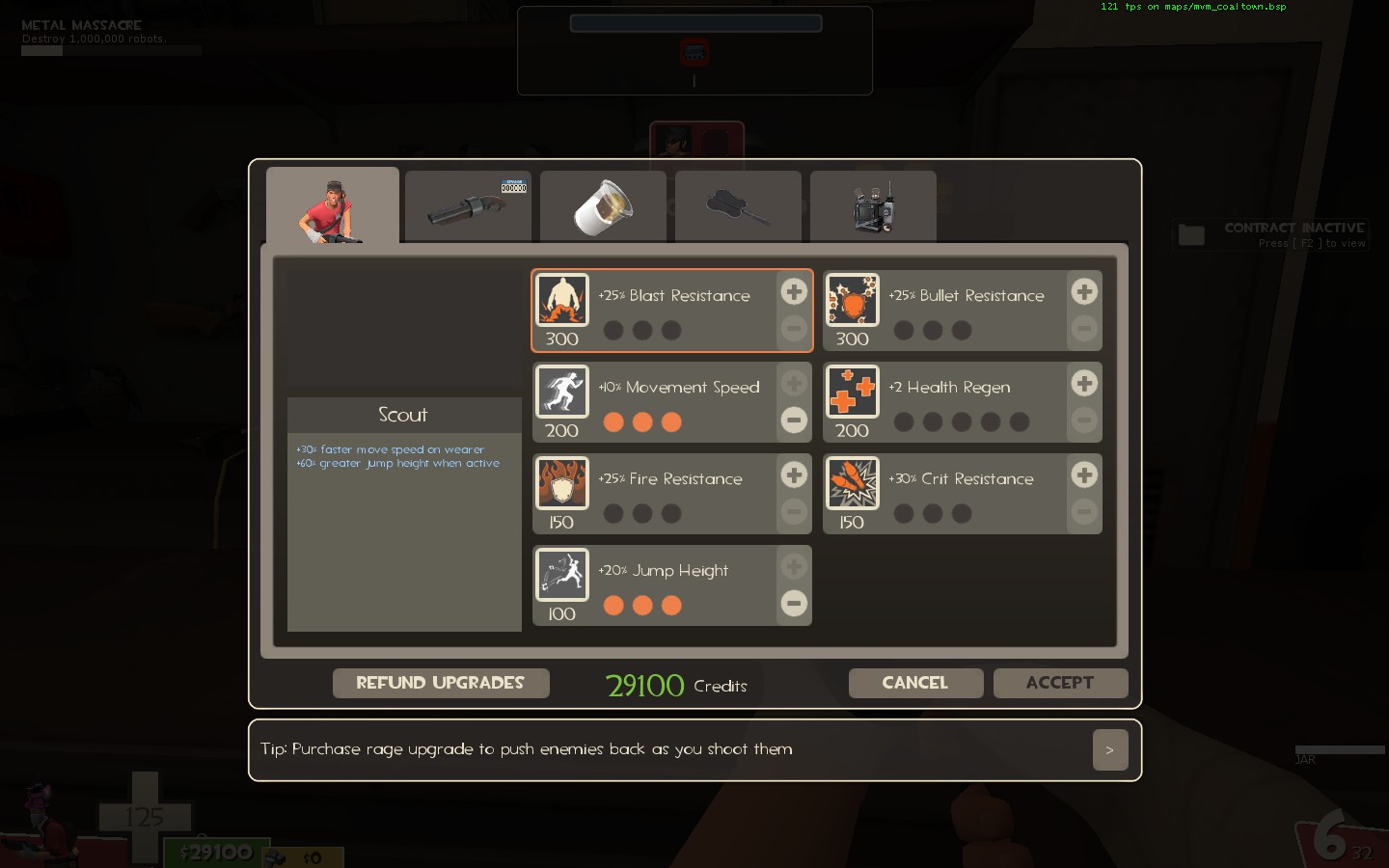 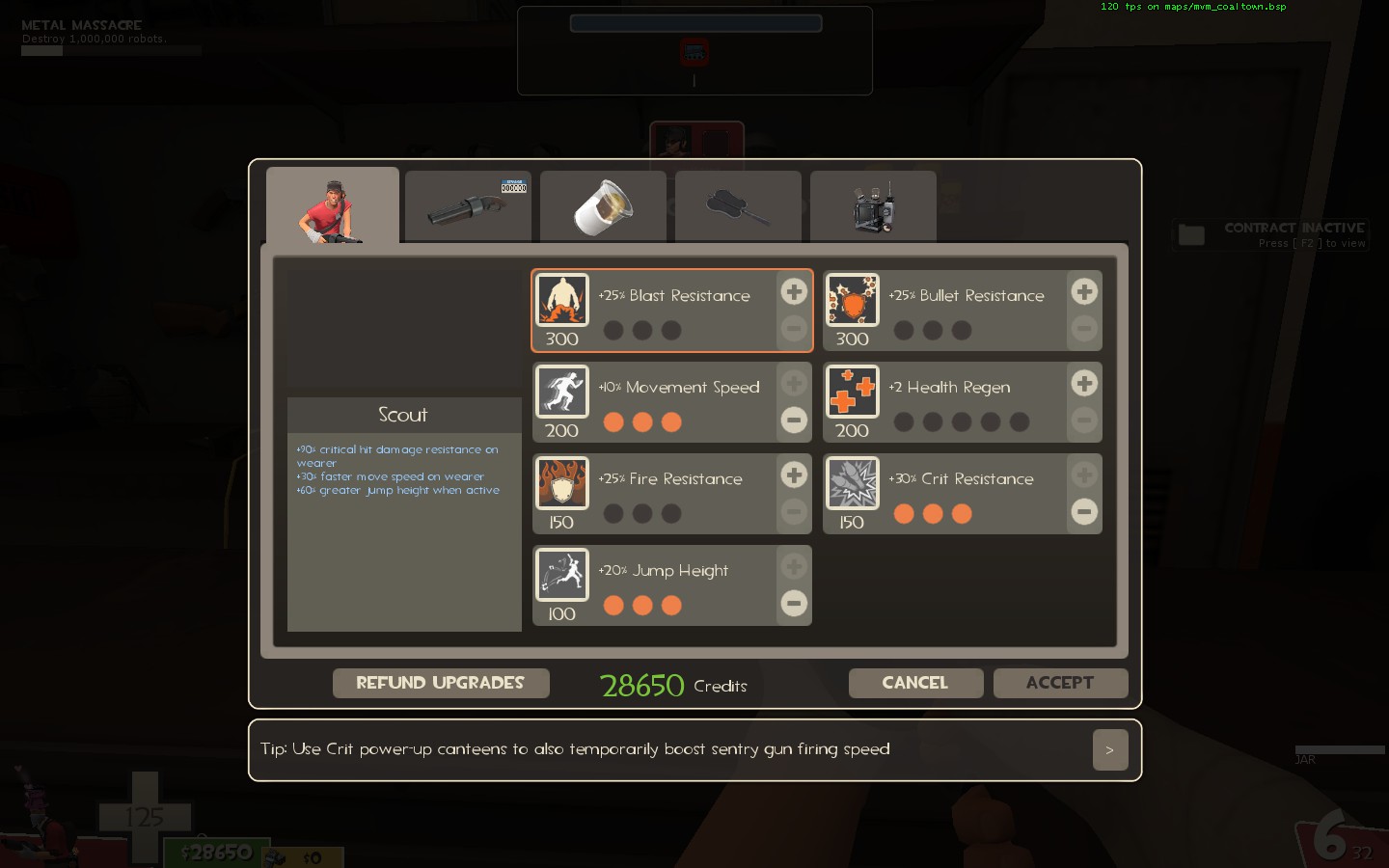 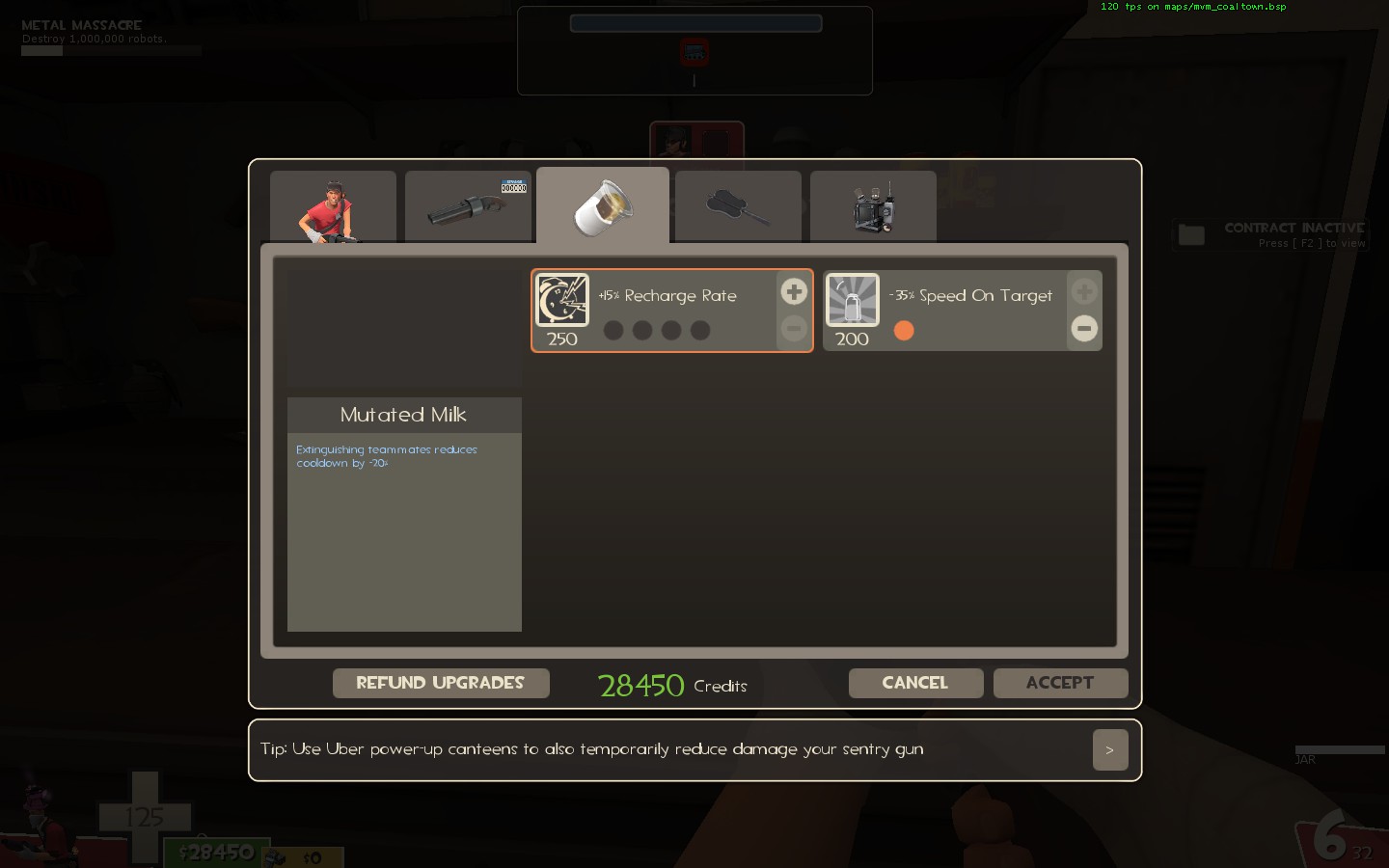 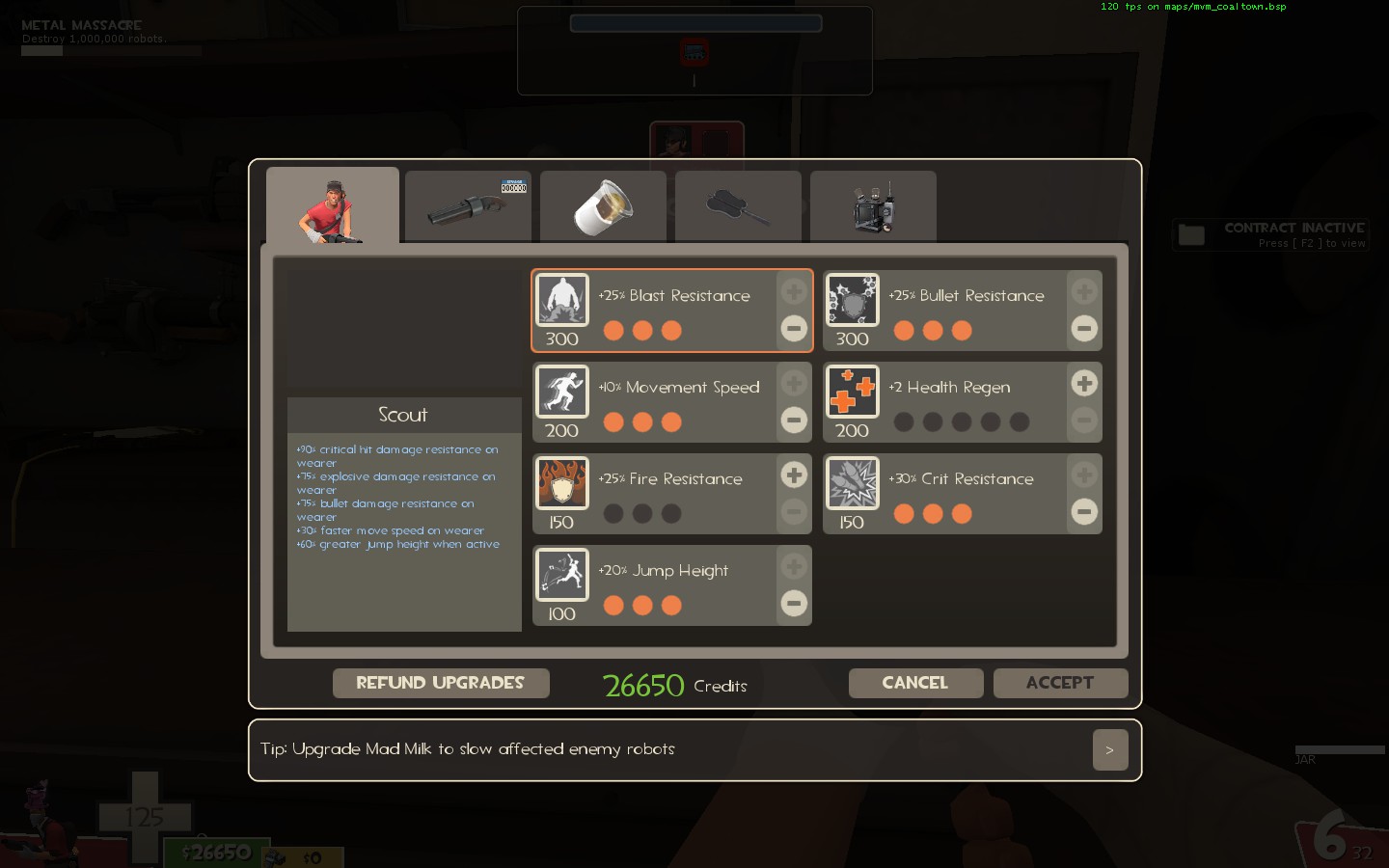 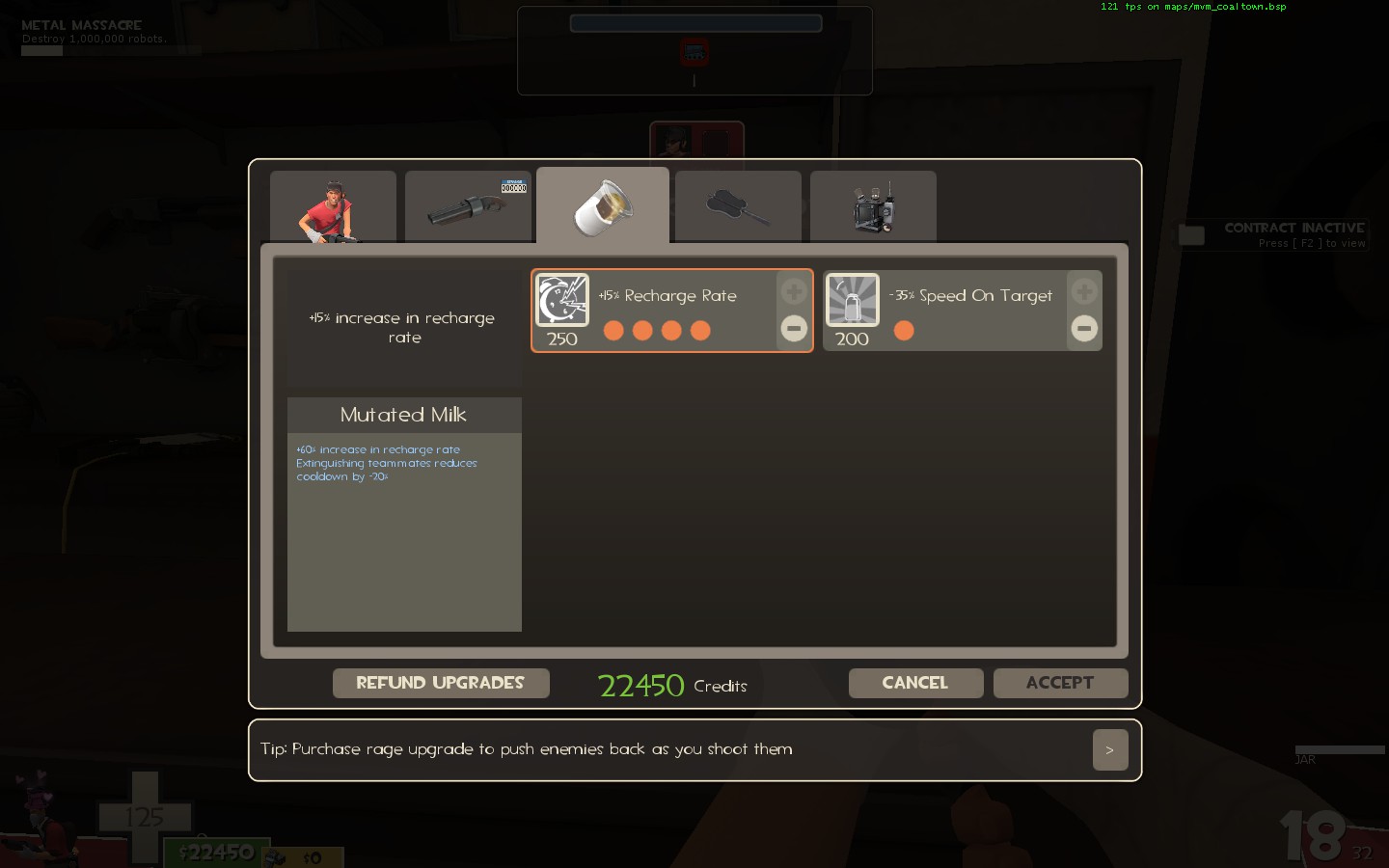 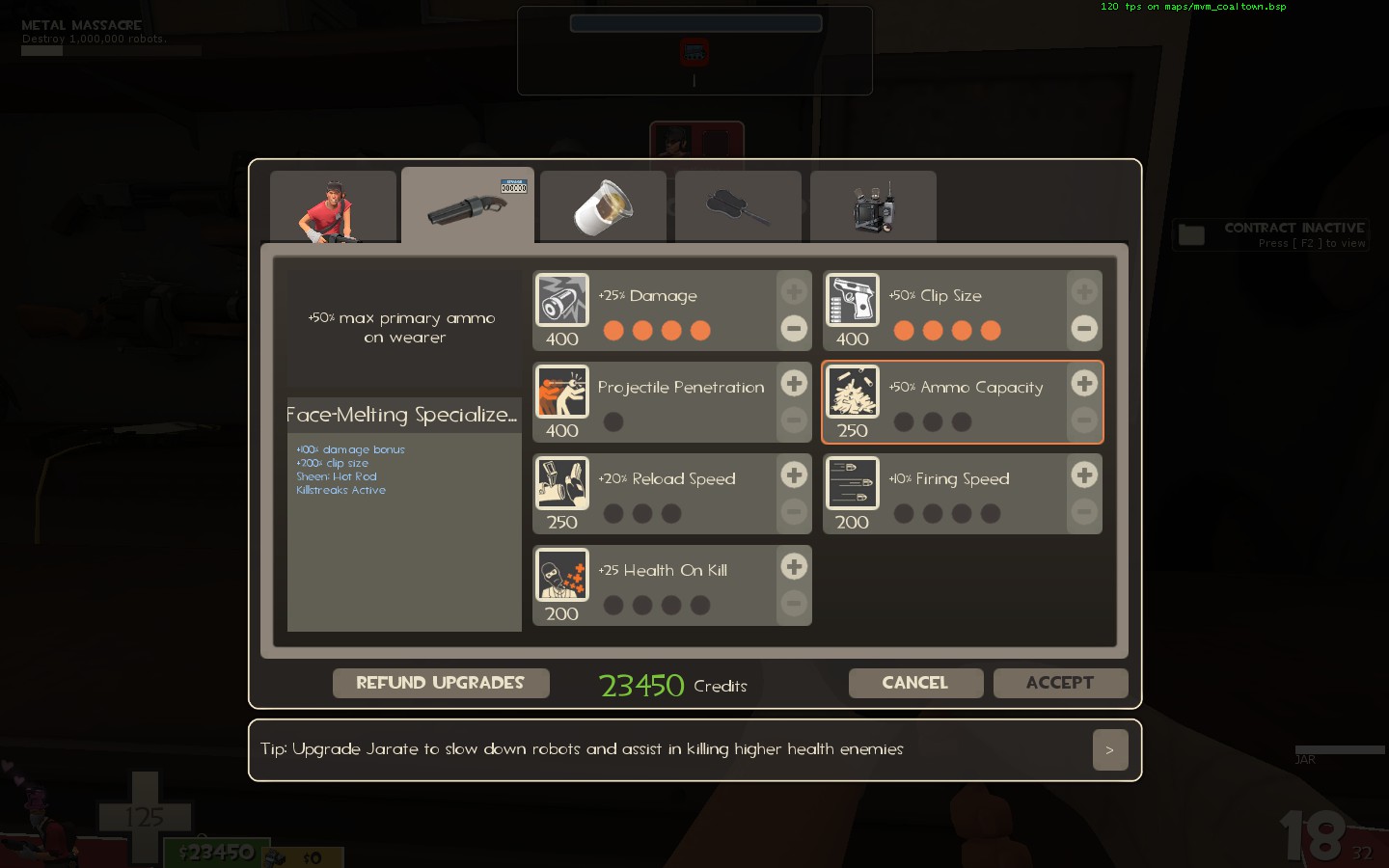 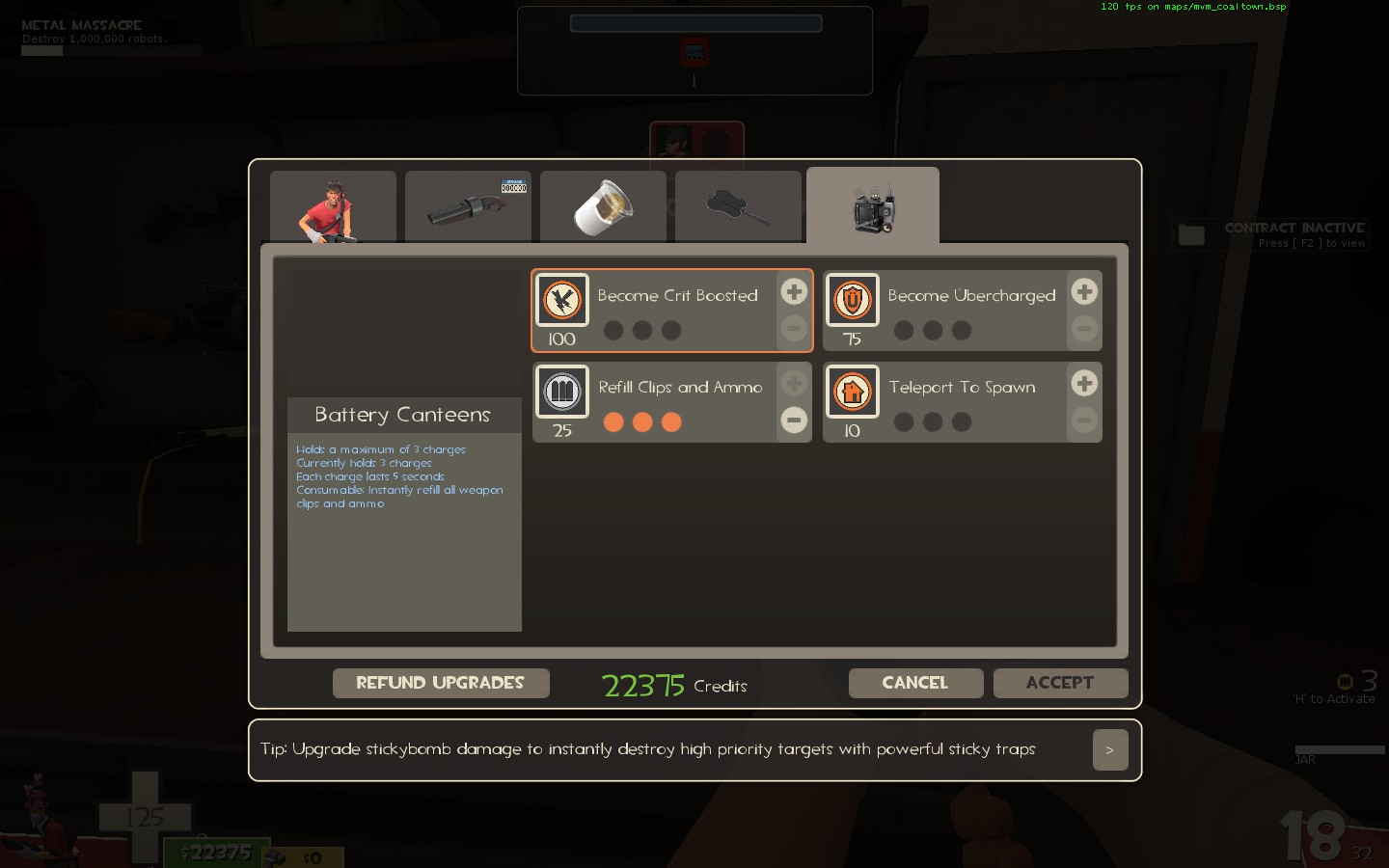 How to Play
Run and jump around to collect the money. Use your Movement Speed and Jump Height to do this quickly and use your resistances to survive the aggro while collecting it or simply wait until the bots are gone to swoop in and collect it. (Scout's increased money collection radius, health from money, and instant respawns to get to money quickly after dying make him ideal for this role)

Throw milk at Giant robots, large groups of robots, and bosses. Especially Super Scouts if you have the Milk Slow Upgrade. Being able to regenerate health very quickly by dealing damage even without killing the target will be a strong benefit to your damage classes.

Fan the Giant robots and bosses so your team will deal mini-crits to them. It will allow your team to kill much quicker because of the damage increase.

Take out snipers if your Soldier is slacking or busy on something else (Shooting large groups, on a tank, etc.)

You may be able to drop Uber medics if your Demoman/Sniper/Crutch Passer Pyro has failed in doing so or is dead. I usually shoot them once and mid range and then go in for a meatshot. If you're lucky, the mid-range shot won't make them pop while also putting them in range for the meatshot to kill them. Otherwise, don't shoot Uber Medics until your Demoman/Sniper/Crutch Passer Pyro takes them out.

Protip: If you want to farm support, milk every sentry buster that spawns. As long as you have the Milk Slow upgrade, each milked buster grants around 3,000 support, and another 3,000 if it explodes. It's a guaranteed free 3,000 and usually 6,000 support as long as you're paying attention to the announcer. The buster might not explode depending on if it takes any critical damage.

Protip: Refill canteens refill the Milk's charge. This can be useful on waves filled with Super Scouts that all come out around the same time (Ex: Wave 3 of Metro Malice).

Red Money
Red Money is generated by kills gotten with any Sniper Rifle. It used to be headshot kills, but it's now just any kills from the Sniper Rifle. That said, any money missed can't be your Sniper's fault unless he's SMGing or meleeing for some reason. It still gives you health and overheal, but it's already collected towards the wave's money count. It gives the Sniper points in the Money category on the Scoreboard. Green money takes priority over it, but still pick it up if it's the only money on the field since it still heals/overheals you.
Addressing Anticipated Comments
I'm gonna clear the air a bit in this section. It's mostly for the advanced players reading this guide not for their own gain but simply to critique it or something idk. Actual beginners can just skip this if you want; it doesn't really pertain to you.

Conclusion
Collect the money. Milk giants and large groups. Fan giants. Draw aggro away from your team and avoid it with your mobility. This guide is generalized for the most part, so don't go saying in the comments "you forgot this," as I probably didn't forget it, but rather left it out on purpose because I decided it was too specific. However, if you truly feel I did, I may change parts to fit whatever fix you may have in mind. Cheers.
Changelog
2/24/2018
Changed Loadout images to show stats and pictures of the weapon rather than just pictures of the weapon.
< >
21 Comments

Tax Collector Scout May 21 @ 8:56pm
As a Scout main, this guide has been helpful. However I kinda disagree with the movement speed and jump height as I usually find those to be better suited for later waves as more of an extra cash boost than anything.

In my experience, Scout already has good mobility stats. And once you build up a solid investment of overheal, you're gonna wanna be up there on the front lines dealing damage with your team to quickly pick up the cash since not all of them will let you pick up the cash. Not to mention, when you do have a solid investment, you can become a greater meat shield distraction than any heavy.

Aquidu #SaveTF2 Oct 8, 2019 @ 11:40pm
well. i don't use bonk instead of mad milk anymore, unless i'm playing boot camp or something and there's money locked behind a wall of robots, other than that i always use milk now