Store Page
Hearts of Iron IV>  Workshop > Enriador's Workshop
This item has been removed from the community because it violates Steam Community & Content Guidelines. It is only visible to you. If you believe your item has been removed by mistake, please contact Steam Support.
This item is incompatible with Hearts of Iron IV. Please see the instructions page for reasons why this item might not work within Hearts of Iron IV.
Current visibility: Hidden
This item will only be visible to you, admins, and anyone marked as a creator.
Current visibility: Friends-only
This item will only be visible in searches to you, your friends, and admins. 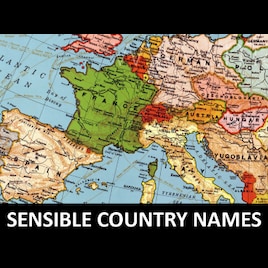 This item has been added to your Subscriptions. Some games will require you to relaunch them before the item will be downloaded.
In 1 collection by Enriador
[HOI4] Ironman Pack

* WHAT IS THIS MOD ABOUT?

It's an attempt to make the name of every country, irrespective of ideology, be more... sensible. Just like in HOI3!

It means that countries won't have bizarre names ('Kiwi Empire' begone) or incredibly long names that no one can actually remember (try reading 'People's Republic of China' or 'Kingdom of Norway' in a quick glance). Countries will be called exactly what they were called by most of the world at the time (1930s-1940s) in a short, concise way.

* CAN YOU GIVE SOME EXAMPLES?

To give two examples, 'German Reich' will be called 'Germany' even when fascist, non-aligned, democratic or communist, while 'Russia' only changes its name when communist ('Soviet Union'). Fancy subject names (e.g. Lithuania under German control, the 'Reichskommissariat Litauen') are changed to more simple ones ('Lithuania'). Some historical names that were more widely used are applied as well.

* DID YOU CHANGE ANYTHING ELSE BESIDES COUNTRY NAMES?

The Fascist Autonomy system has been translated from German into English (so we have 'Comissariat' and 'Protectorate' instead of 'Reichskommissariat' and 'Reichsprotektorat'; Fascist Italy using German nomenclature no more!).

The mod also fixes dozens of vanilla errors and typos in localisation/text, and makes sure technology groups, decisions and focuses have sensible, logical names.

* WHAT ABOUT CIVIL WARS?

You might see two Spains and two Indias. That's the only part where I think the mod can become somewhat strange, but after a while you will get used to it - civil wars rarely last long, and you can always know which tag is which by looking at map color, flag, or ideology. A small price to pay for no longer seeing a massive "Nationalist Spain" for the rest of the game.

Load-Bearing Drywall Feb 15 @ 9:23am
I've tried with and without other mods, SCN has worked for me in the past. I've tried verifying files and deleting my cache just in case something from a different mod stayed after being deleted and was interfering with SCN.

Are you using any other mods that add new factions, events etc? I checked but seems OK on my end.

Load-Bearing Drywall Jan 8 @ 7:26am
Only country names are working for me, the edits to faction names and flavor, consistency, and typo fixes aren't showing up in game.

Enriador  [author] Oct 14, 2020 @ 7:56am
Aren't they also known as Congo-Leopoldville and Congo-Brazaville in real life? I could change them to Congo and Democratic Congo or something.