Crosses and Headers
By _K_o_S_
In this guide, you will find everything you wanted to know about headers and crosses.

Who are your forwards

How actions are calculated

Comments
Introduction
Headers play a special role in the tactical schemes of Football, Tactics & Glory. They successfully compete both with usual goal kicks and skills.

Even if you don't have powerful strikers, one average Center Forward can score almost every match. You can build your whole tactics around crosses from the flanks.


You can not score headers in the first turn after kick off if your forwards do not have the "Head Play". Because there are just not enough actions to move the ball to a flank, run to the penalty zone and perform a cross. However, you can use such footballers when they happen to take a position in the penalty zone in the middle of the match.

Footballers with the "Head Play" can attack in the kick-off turn. 1) Give the pass to a flank footballer, move to the special flank tile, 3) Perform a cross.

So you can prepare a formation which will be able to start the match with the cross+header.

Center Forwards are made to score with headers. Even if they didn't learn the "Head Play", they always have it in the matches. Use them always if you plan to win crosses.
Correct positioning
First thing you have to know
Crosses are performing from any of the 4 tiles on the flank. If all other conditions for the cross are met, the special tile will highlight on the opposite side: 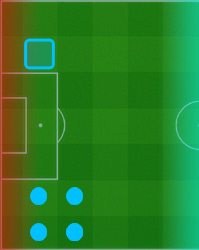 Second thing you have to know:
There must be 1 square between a flank footballer and the attacker. Because the ball needs some space to gain a height.

The images below show where the attackers should stay depending on the position of the passer: 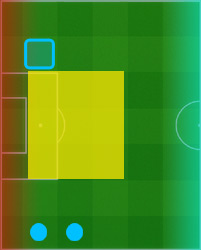 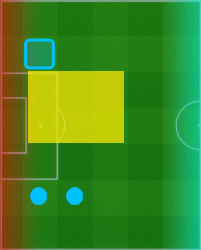 IMPORTANT! The ball can't be intercepted in the tile next to the passer. Use this to your advantage.

Third thing you have to know
If your attacker stays in the third row, and ahead of him two opponent footballers stay in a line the cross will not be available: 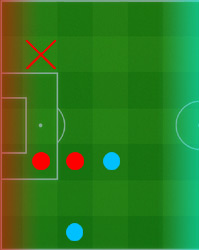 Take this rule to account when the opponent uses a Sweeper (SW). The footballers of this class automatically move depending on the ball's position on the pitch. So they often create a line of two footballers which blocks the possibility of the attacker to run and finish the cross.

This screenshot shows a situation in which the cross won't be available because the SW will stay behind his teammate: 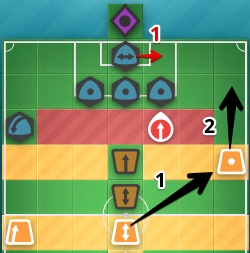 So you will have to replace your footballers in order to neutralize the pair of the opponents. Do you remember that the footballers on the next tile after the passer can't intercept the crosses? Use it: 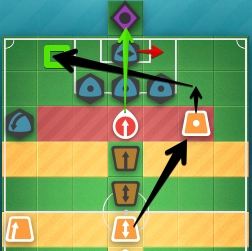 In the most cases, the closest footballer will hit the ball. So try to position your attackers as close to the passer as possible.

The following scheme shows the WRONG way to perform a cross in the previous tactical situation: 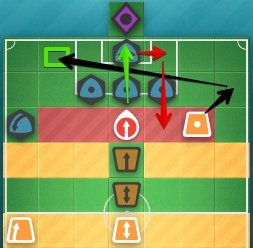 In this example, the opponent's SW will be closer to the ball than your CF. So, firstly, the SW will try to hit the ball, and most probably - will kick it out.

Fifth thing you have to know
If your attacker and the opponent's defender stay one against other AND if both of them can play with their heads (the rules are written in the first paragraph), they will roll the dice simultaneously. The one who rolled more - will kick the ball. 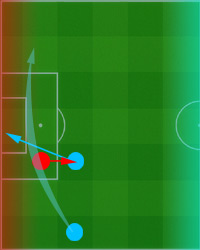 In the most cases, the opponent's defenders (and yours as well) do not possess the talent "Head Play". So if they stay in the second row, they can't intercept the crosses. Just place a CF on the front of them, and no one will prevent him from kicking the ball. 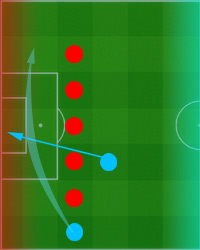 How actions are calculated
Heading ability and goalkeeper's defece
Before reading about further mechanics, learn how basic characteristics are calculated.

In any situation which uses a head (finishing the crosses. intercepting the lofted passes, fight in the air) there is only one way of calculation:


When goalkeepers defend from the headers, they use their fists and their ability to choose the right position. So they use other characteristics.

When defending from the headers their potential is equal to:

The logic behind these numbers is very easy. So when you figure it out once, you will be able to easily understand what your footballers can do in the match and what opponent's goalkeepers can do against your headers.

Calcullation of the crosses
When performing a cross, the system compares a Passing attribute of the passer and the Cross factor.

If the passer rolled the higher number, the cross will successful. If the number is lesser, the ball will fly to a random surrounding tile. No one will be able to hit the ball.

Calculation of hitting the ball
After the cross is performed, the forwards try to hit the ball in order to score a goal, but defenders try to kick the ball out.

They roll the potential of Heading ability. The rolled number compares to the Cross factor.

If a footballer rolled the higher number he will hit the ball. Otherwise - the ball will fly further, and the next footballer will try to hit it.

As the Cross factors are quite small, in the most cases the first footballer on the ball's trajectory will hit the ball.

There is always 10% probability the ball will miss the goal.

The Heading ability gets a distance penalty if a footballer tris to hit the ball from the second or third row. Second row: -15, third row: -30.

I really hope that after reading this guide, you will be able to fearlessly experiment with the crosses and headers.

Pay attention to the talents of your footballers, increase the right attributes, experiment with classes.

The logic of crossing works as follows:

2) Check if someone hits the ball with a head (every participating player rolls a header number in the order of the closeness to the ball; the first player who rolled higher than the cross factor's roll hits the ball).

Example:
1) Your passer rolled 5
2) Cross factor rolled 3
3) The ball fill fly successfully
4) The sweeper rolls 8
5) The ball is intercepted by a sweeper

Herr-Ghallas Oct 5, 2019 @ 5:08am
There's something i really don't understand. Sometimes i perform a cross from afar, with a cross factor of 15 or 25. The sweeper is in the way, but he rolls only7 or 8, but still kicks the ball out...am i missing something ?