Store Page
Project Zomboid>  Workshop > HypnoToadTrance's Workshop
This item has been removed from the community because it violates Steam Community & Content Guidelines. It is only visible to you. If you believe your item has been removed by mistake, please contact Steam Support.
This item is incompatible with Project Zomboid. Please see the instructions page for reasons why this item might not work within Project Zomboid.
Current visibility: Hidden
This item will only be visible to you, admins, and anyone marked as a creator.
Current visibility: Friends-only
This item will only be visible in searches to you, your friends, and admins. 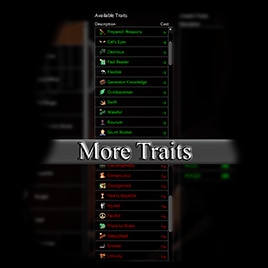 HypnoToadTrance
Offline
See all 1536 collections (some may be hidden)

This item has been added to your Subscriptions. Some games will require you to relaunch them before the item will be downloaded.
Description
This is my first attempt at modding for Project Zomboid.

This mod adds a great deal more variety to the traits available to players during character creation.

The most prominent feature so far is the introduction of 1-point-cost traits which give players a minor boon.
so far, this includes a series of Prepared traits, which allow users to spend their trait points to give them certain starting items.

The mod also attempts to add a greater variety of expense, as in there are more -1, -2, -3, -5 traits. This should help prevent the annoying feeling of having one solitary point left with nothing to spend it on.

Balance is currently an issue. I would appreciate feedback on traits.

Dreeming-Royalty Jul 2 @ 6:03am
The packer bag doesn't have any texture, or... entity, really. It looks like there's nothing on my character's back when I have it equipped.

R4skall Jun 25 @ 8:31am
@duanethebathtub they are vanilla traits without vanilla means to correct those two

Someone Jun 25 @ 4:30am
@duanethebathtub I think those are vanilla traits. In IWBUMS there are glasses but I don't know if they correct the vision.

duanethebathtub Jun 22 @ 10:54am
I use the hard of hearing and sight traits, but there aren't any hearing aids or glasses to fix. Will this be fixed? Thanks.

duanethebathtub Jun 22 @ 10:52am
@Poloski - that is what is causing that... I was watching so many zombies with backpacks (that I wanted) and when they died, they were naked with no loot. Hopefully, this and other issues get fixed. I LOVE this mod.

Poloski Jun 21 @ 7:35pm
Martial Artist causes zombies to die naked, and I think it enables multi hit, which bugs gamemodes that have it disabled