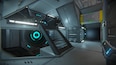 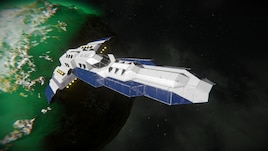 This item has been added to your Subscriptions. Some games will require you to relaunch them before the item will be downloaded.
Description
The ShiCon Dynamics' CSX-600A Trinity-class Recon Corvette is a fast and maneuverable exploration and reconnaisance vessel. As the first build in a line of capital ships coming from a manufacturer focusing mainly on starfighters and combat transports, the Trinity shows many design traits from the company's prior works, mainly the legendary XT-25 B Victory Mk-2.

At a length of 145m the Trinity is sacrifices heavy armor for weight reduction and, armed with a pair of forward missile launchers and two defenssive turrets at the rear, mainly relies on its speed to evade and outrun any hostile encounters. Meanwhile its dual jump drives enable it to traverse distances of over 2,000 kilometers in a short time.

The Trinity is well capable of atmospheric flight and landing even on high gravity worlds, although its vertical thrusters ar mainly designed to keep it at a steady height rather than provide actuall upward propulsion, which is why atmospheric handling resembles that of a classic jetplane, also rendering the Trinity more suitable for touching down on flat terrain rather than rugged mountains.

The small rear hangar allows the Trinity to carry a small utility or combat vehicle for aerial or ground support, where as a fully functional production unit in the front enables the ship to be self-sustaining in harsh conditions.

Design notes:
As most of my other models this design is based upon a model I created as a mod for X-Wing Alliance See here[www.bluephantom.de]. Originally the wing span would have been an additional 5-10 meters to both sides but I had to omit those since they had no functionality and only increased the ship's weight and preventing it from being able to levitate in high-gravity environments. Also, the original version did in fact have alot more weapons to a degree that - in hindsight - seems pretty overpowered.
< >
10 Comments

vince.t  [author] Feb 12, 2018 @ 9:04am
OK just updated the blueprint, I've added 2 direct O2-H2-generators for fuel generation, right next to the main hydrogen tanks in the engine section. Thanks again, Mayze, for pointing out this flaw.

vince.t  [author] Feb 12, 2018 @ 4:21am
Hmm fair point. You may have hit on something there. I think you can reach the oxygen generators via the H-Tanks but I‘ll have to double-check that when I get home from work, and place a direct port down there.

vince.t  [author] Feb 11, 2018 @ 12:00pm
Yeah I might have underdone it with the weapons on this one. Like I wrote in the description, the original design wath loaded with weapons, somewhat around 10 turrets and 6 stationary forward weapons. I might go and rename this one as the less combatative CS edition and rerelease the CSX more closely to its original design.

Quartofel Feb 11, 2018 @ 11:18am
I really liked the cockpit. It has everything that's useful, no unnecessary, flashy bullshittery I usually put on my custom HUDs :D
Looks like a functional ship and I respect that a lot.

Could use moar weapons though :v

vince.t  [author] Feb 10, 2018 @ 11:56pm
I don‘t go well with metas and conventions. If the devs wanted players to adher to those they wouldn‘t have made this a sandbox game.

Loptyeir Feb 10, 2018 @ 10:29am
You have to have guts to pull off such a simplistic cockpit design in the modern space engineers meta, nice job.