Greenlight > Games > iRacing's Workshop
Greenlight is being retired. For more information on how to submit games to steam, refer to this blog post.
This item has been removed from the community because it violates Steam Community & Content Guidelines. It is only visible to you. If you believe your item has been removed by mistake, please contact Steam Support.
This item is incompatible with Greenlight. Please see the instructions page for reasons why this item might not work within Greenlight.
Current visibility: Hidden
This item will only be visible to you, admins, and anyone marked as a creator.
Current visibility: Friends-only
This item will only be visible in searches to you, your friends, and admins.
iRacing.com
Description Discussions14 Comments872 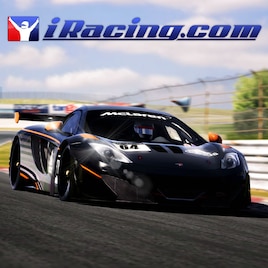 iRacing
Offline
See all 111 collections (some may be hidden)

View iRacing.com in the store

We are the ultimate place to go racing online. From NASCAR, to IndyCar, GRAND-AM, Aussie V-8 Supercars to sports cars and Grand Prix racing, iRacing has it all. All you need is a PC, a gaming wheel or game pad that simply plugs into the USB port of your computer and an Internet connection. iRacing organizes all of the racing for you with over 40 official series , or you can choose to host your own race or race in one of over 400 private leagues.

{LINK REMOVED}iRacing.com was voted the #1 racing title of all time in 2012 by PC Gamer

iRacing is a thrilling on-line experience that offers:
< >
872 Comments

KATIJAYN Nov 3, 2015 @ 5:56am
'just when you thought you were becoming a sim racing expert: ...you found iracing and the ball game was changed for ever :-) There's nothing quite the same, and the same is quite different. I race to win...

DoodleBob'sPencil Feb 25, 2015 @ 6:59pm
Can we get it on here to where we can buy subscriptions to this because I have iRacing already and leftover money here sitting around.

LithiumFox Dec 23, 2014 @ 3:25pm
I have a lot of fun with this. Graphics are a little dated, and the physics are not perfect but they have been showing a lot of work up for something grand. DX11 and new surface model in the pipeline, i'm pretty stoked. :)

iRacing.com has been Greenlit and is now listed in the Steam store. For the latest information, purchase options, and discussions for iRacing.com, please see it on the Steam Store or in the Steam Community.
Visit Store Page
For more details Visit Community Hub
For latest discussions
If you really, really want to, you can continue to the Greenlight page. Information on this page may be out of date, since all the action has moved to the areas noted above.