Greenlight > Games > Ayyooo's Workshop
Greenlight is being retired. For more information on how to submit games to steam, refer to this blog post.
This item has been removed from the community because it violates Steam Community & Content Guidelines. It is only visible to you. If you believe your item has been removed by mistake, please contact Steam Support.
This item is incompatible with Greenlight. Please see the instructions page for reasons why this item might not work within Greenlight.
Current visibility: Hidden
This item will only be visible to you, admins, and anyone marked as a creator.
Current visibility: Friends-only
This item will only be visible in searches to you, your friends, and admins.
Spate
Description Discussions0 Announcements7 Comments299 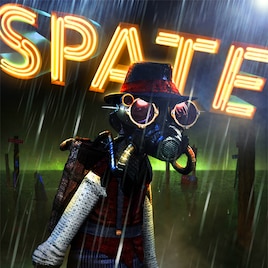 Ayyooo
Offline
See all 56 collections (some may be hidden)
Kickstarter

View Spate in the store

Hi everyone. Thanks again for the support. The game is finally on Steam!
http://store.steampowered.com/app/269810/

The game is coming to Steam March 27th! Also, check out the launch trailer.
http://youtu.be/Fnm7NUiDCws

Read More
Description
Release date: 4th quarter 2013
Learn what game designers David Jaffe and Jenova Chen have to say about Spate. Spate is currently featured on the show "The Next Game Boss".
http://www.ign.com/wikis/next-game-boss

Spate is a platformer. But it as much Mario as it is Dear Esther. Three things that I believe make Spate a unique platforming experience are its art, its atmosphere, and its drinking mechanic.

Art – I started my career in games, but have spent most of it as an artist in the film industry. I have worked for the Jim Henson Creature Shop, Sony Pictures Animation, and currently at Walt Disney Animation Studios. I am using the knowledge I have gained in the film industry to create what I believe to be a special experience with Spate. Things like subliminal messages, color changes to subconsciously affect mood, foreground and background layering to add depth, camera angles that evoke emotion, and provocative story points that include death and drinking. All while staying true to the artistic goal of the game, damp.

Drinking Mechanic – At the click of a button the character can take a swig of absinthe. This temporarily gives the player higher jumping and faster running abilities. But, it also makes him hallucinate, which changes the world both visually and physically. The mechanic is meant to mirror the emotional seesaw battle of drinking.

Atmosphere – Yes there are really fun action platforming areas in Spate. But there are also parts where the player just travels through the world. I compare these parts to long shots in movies. The average shot in a film is 3 seconds. As viewers, when we see a shot go past a minute without cutting, it has an emotional effect on us (think “Children of Men”). It sucks us in. It makes us alert. It makes us think without being forced to think. And it turns out that we’re happy to! This idea combined with an amazing score by award winning composer Mike Raznick helps us feel the rain as it floods down, and it gives us chills when the wind blows by. Most of all, it sucks us into the world and makes us forget that we’re just playing a game.

The Story – Spate is a journey of one man’s struggle and descent into madness that is fueled by his addiction to absinthe following the tragic death of his daughter. Detective Bluth is hired to investigate mysterious disappearances that have been occurring on an island offshore, and figures that he has nothing left to lose. The detective hopes to uncover some of the island’s mysterious, but is finding it increasingly difficult to battle his own pain. The death of his daughter continues to haunt him mercilessly, and his regrets at their last moments together are chasing his pain deeper into his heart. As his absinthe use increases it becomes harder and harder for him to tell reality from fiction. Soon he finds he is fighting for more than just the missing people… he is fighting against the madness as well.

Spate has been Greenlit and is now listed in the Steam store. For the latest information, purchase options, and discussions for Spate, please see it on the Steam Store or in the Steam Community.
Visit Store Page
For more details Visit Community Hub
For latest discussions
If you really, really want to, you can continue to the Greenlight page. Information on this page may be out of date, since all the action has moved to the areas noted above.