Store Page
Hearts of Iron IV >  Workshop > Elfangor567's Workshop
This item has been removed from the community because it violates Steam Community & Content Guidelines. It is only visible to you. If you believe your item has been removed by mistake, please contact Steam Support.
This item is incompatible with Hearts of Iron IV. Please see the instructions page for reasons why this item might not work within Hearts of Iron IV.
Current visibility: Hidden
This item will only be visible to you, admins, and anyone marked as a creator.
Current visibility: Friends-only
This item will only be visible in searches to you, your friends, and admins. 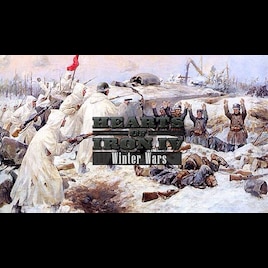 Elfangor567
Offline
See all 561 collections (some may be hidden)

This item has been added to your Subscriptions. Some games will require you to relaunch them before the item will be downloaded.
Description
Compilation Mod: Season Pass

Welcome to the Winter Wars Mod! I made this mod over the course of several months, complete with research. I tried hard to make it so that it corresponded as closely to Paradox's design values as possible. If you have any questions, bug reports, or recommendations, please let me know!

Winter Wars is an expansion pack style mod for the Scandinavian countries of Denmark, Iceland, Sweden, Norway, and Finland, complete with unique focus trees and events as well as an upgraded historical roster. Where there were no historical facts available (Icelandic tanks for example) I went ahead and gave them some plausible sounding names.

Denmark
Coming out of the Great War relatively unscathed, Denmark believes that its strong trade ties to Britain and Germany will keep them safe. They have down-scaled their military with a philosophy known as "Defenceless Neutrality" spearheaded by Peter Munch, arguing that Denmark would stand no chance in any sort of military situation, and as such should not provoke their neighbors by having a strong military. Due to this philosophy, the Danish military is modern, but severely underfunded and underequipped. In southern Jutland, the DNSAP works under Frits Clausen to push for the reconquest of Schleswig-Holstein, and in the cities, the communists fragment as the party splits between those who support the Comintern, and those who look instead towards a truly stateless society.

Iceland
Iceland has recently been granted Home Rule by the Danish, and their desire for independence only grows stronger. Although few in number, the Icelandic people will defend their homeland with everything they have, but they have little interest in the outside world, and have no intention of being drawn into any foreign conflicts. However, there are those who wish otherwise. The squabbling leaders of the Nationalist Party look to Germany for guidance. Meanwhile, others meet to discuss how to better convince the population to join with the Soviets.

Norway
Although Norway did not officially choose a side in the Great War, they are often called the Neutral Ally for their trade policies towards Britain. Now, as war again draws to Europe, Norway will again have a choice to make. Do they support the British, or the Germans? For both seemed prepared to invade at any moment. Fighting against the mold is Vidkun Quisling, the philosophical minded leader of the Norwegian Nasjonal Samling (NS) party. However, his party is held back by internal friction between its members, and should he wish to gain power without foreign help, this will need to be quelled. In certain meetings across the country, angry debates are held as the communists fight over whether or not to join the Comintern, and should they gain traction, they will first have to deal with this issue.

Sweden
Sweden is dedicated to keeping the status quo. Arguably the most powerful Scandinavian nation, Sweden must make a choice. Do they defend their neutrality at all costs? Or have those on its borders made one step too many. Inside this country politics are different than what they portray outside. The king has had the last of his executive authority removed, and there are rumblings for not only a return to old values, but also to reject the current status quo in favor of a more radical approach.

Finland
Staring down the Bear, Finland has recently come out of not only a civil war, but an attempted fascist coup. Their military is well trained and strong, but they lack the resources to fight if and when the Soviets attack. If they wish to survive, Finland must turn to the outside world, and find its allies. All that remains is for them to decide who those allies might be.


KNOWN ISSUES:
The Denmark Bug – Sometimes, for an unknown reason, the game will crash during an event where Denmark surrenders to Germany and becomes their puppet. This only happens a small percent of the time, but I have never been able to figure out why. There are 2 fixes for this, but unfortunately both involve the console. I apologize in advance for the inconvenience.
- Have Germany annex Denmark via console. The event can’t fire if Denmark doesn’t exist.
- Tag over to Denmark and fire event SCA_denmark.100. After the event goes through, it should be fine. I have no idea why the event works if fired manually but not regularly.

In order to keep the game's aesthetic, I will not be using any pictures for portraits, as I feel it always pulls me out. If you wish to offer a portrait that fits in with the game's art style, for any of the characters without a picture, I will happily use it. Sadly my art skills do not go that far.


Next Topic Hint: https://www.youtube.com/watch?v=CGfKi6kpdTQ (Rock you like a...)
Next Mod Answer: Eye of the Hurricane

Elfangor567  [author] Aug 17 @ 3:04pm
@mattr0522
Which focuses? Most complete before you conquer all of Scandinavia, so it's not redundant if you're getting them earlier.

mattr0522 Aug 16 @ 11:50am
the national focuses that grant cores on other scandinavian states are too op. Form Scandinavia already does this, so it's also redundant.

Kommandant Galileo Jun 30 @ 3:01am
does it work with mods that adds more states like Satisfying States?

Truckytrain May 28 @ 4:59am
@Elfangor567 it just says nothing if it works or dosent work so i was just a bit confused but i tested it and it works fine