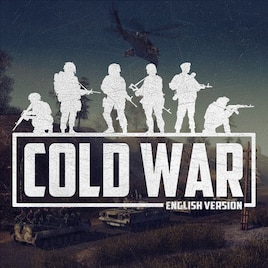 Old_Fox98
Offline
See all 307 collections (some may be hidden)

This item has been added to your Subscriptions. Some games will require you to relaunch them before the item will be downloaded.
Description
Cold War mod: English version
This is English language pack only, apply Cold War mod first (phglobal .my1 .ru/forum/14-95-3 )
Note that main mod is unavailible in Steam
Cold War mod is a large-scale modification on the war between the SCO and NATO countries in an alternative reality on the battlefields of the series of games "Men of War 2".

Description
The action takes place in an alternative reality. Difference is invention of an effective and relatively cheap way of destroying nuclear warheads from distance. After saturation of the air defense of NATO with anti-nuclear emitters, the last factor that kept the Alliance from attacking Russia and China disappeared.

The main single player campaign allows the player to fight for Russian motorized rifles, paratroopers and special forces. Additional campaigns reveal the themes of wars in Chechnya and Iraq, and also supplement the main campaign. All missions support cooperative, some are more suitable for cooperatives, some were developed mainly for single-player games. Some of the missions of the main campaign supports the transfer of troops and the results of the battle to the next mission.

Multiplayer bases on the principle of the division of troops by types into a small number of brigades - specialized groups that prefer a certain tactic, performing a certain role in combat and equipped with a certain vehicles. Examples:
-Motorised forces of the RF or the US Army. Armed with tanks and infantry. They prefer close contact with the enemy, they hold the line.
-Russian VKS or the US Air Force. Equipped with aircraft and helicopters. Provides air support to ground troops, destroys tanks, long-range artillery and air defense.
-Artillery and air defense. Armed with artillery, MLRS and air defense. Performs artillery barrage, coveres ground troops from air strikes.

At the beginning of the battle the player chooses one of the brigades. After that, he can only buy specialized troops of the selected brigade and common forces, but is deprived of access to the specialized forces of other brigades. The brigade can be changed during the battle, but the change takes several minutes, during which the call of any reinforcements is impossible.

Various types of multiplayer battles are available, including the "Tank Biathlon" competition - the race and shooting on the reconstructed Alabino test track.

Mod demonstrates a large number of various vehicles and weapons, from pistols to tactical missile systems. The weapon is configured in accordance with the characteristics of real prototypes - to the extent that it is possible on the GEM2 game engine and within the published data in open sources. Wherever real parameters can not be set (for example, the range of fire), different scales of translation are used. The developers of the mod believe that the transfer of technical characteristics of troops close to reality allows achieving a game balance. The entertainment of the game is realized not at the expense of realism.

The role of the player is the commander of the company or battalion, so some attention is paid to the fact that the troops under the control of the computer can independently use the new capabilities of the mod without overloading the player. For example, the refusal to manually track the target while controlling the ATGM (after all, it is not the commander's job, but the ATGM operator's) that allows artificial intelligence to effectively use them independently or in conjunction with the player.
Popular Discussions View All (24)

whats the correct latest version for the game
jammer_2k9
< >
1,226 Comments

Patrick Vin Oct 18 @ 6:28am
Are you ever gonna be making a install tutorial

Timosh  [author] Oct 17 @ 5:08am
"where can i find the campaigns?" - They replace vanilla ones.
"how do you get the mod in English? I activated both the mod from your website and this mod and my game is all in Russian. Is there something different I have to do?" - activate CW first, CW English last.

aajav302 Oct 16 @ 12:30pm
Alright last question how do you get the mod in English? I activated both the mod from your website and this mod and my game is all in Russian. Is there something different I have to do?

Timosh  [author] Oct 15 @ 8:39am
aajav302 - google about torrents, if you don't know what it is. .torrent is a link, you'll need a special program to use it for downloading mod files. Or use google drive link.