Store Page
Garry's Mod>  Workshop > Lt_C's Workshop
This item has been removed from the community because it violates Steam Community & Content Guidelines. It is only visible to you. If you believe your item has been removed by mistake, please contact Steam Support.
This item is incompatible with Garry's Mod. Please see the instructions page for reasons why this item might not work within Garry's Mod.
Current visibility: Hidden
This item will only be visible to you, admins, and anyone marked as a creator.
Current visibility: Friends-only
This item will only be visible in searches to you, your friends, and admins. 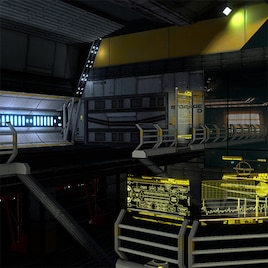 This item has been added to your Subscriptions. Some games will require you to relaunch them before the item will be downloaded.
In 1 collection by Lt_C
Sci-Fi Collection

--Features--
The definition of eye candy, it is a single room looking out into space, attached to a ship that's about 1.5km long. There's enough room behind the glass to put a small ship, and enough room in the skybox (direcly above the room) to fit a second large model. It's as optomized as possible, and although it might look like 3 rooms, it's designed to be used as one. If you're clever, I suppose you could use the other rooms as well, but if the brush can't be seen by the main room, it was likely culled.

Compiled in HDR and with high resolution cubemaps for maximum visuals, and everything is packed in the bsp.

adrain shephard Jun 26 @ 11:25am
can you make full map version this map is so fucking badass