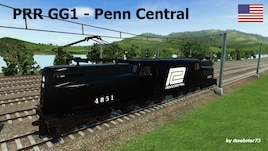 dwebster73
Offline
See all 66 collections (some may be hidden)

This item has been added to your Subscriptions. Some games will require you to relaunch them before the item will be downloaded.
Description
The Penn Central was an American railroad formed in 1968 by the merger of the Pennsylvania Railroad (PRR) and the New York Central Railroad. Within two years the Penn Central filed for bankruptcy. The Penn Central continued until 1976 when viable parts of the company were transferred to Conrail.

The GG1 was an electric passenger locomotive the PRR developed with GE in 1934. After the formation of the Penn Central, the new logo was applied to many GG1's while retaining their original paint scheme. However, later units would be painted black in the manner depicted in this mod. Some of the GG1's were sold to Amtrak, while others went to Conrail.

Features:
Technical Details:
Notes:
Dislaimer:
Author takes no responsibility for your hardware or software. Use this mod at your own risk.
< >
10 Comments

dwebster73  [author] Sep 1, 2018 @ 11:15am
UPDATE v1.2 - Fixed an issue with bogies/wheels. Apparently sometime after I started doing GG1 repaints, Urban Games corrected the issue in the generic GG1 model and I never picked it up.