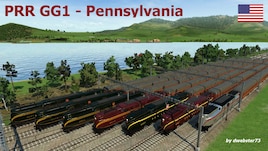 dwebster73
Offline
See all 94 collections (some may be hidden)

This item has been added to your Subscriptions. Some games will require you to relaunch them before the item will be downloaded.
Description
The Pennsylvania Railroad (PRR) was an American railroad established in 1846 that served the northeast and midwest. For the first half of the 20th century, the PRR was the largest U.S. railroad by traffic and revenue. At one time, the PRR was the largest publicly traded corporation in the world, with a budget larger than that of the U.S. government.

Like many other railroads, the PRR suffered a decline in the decades following WWII and eventually merged with rival New York Central in 1968 to form the Penn Central. However, the merger did not go well and within two years the Penn Central filed for bankruptcy. In 1976, viable parts of the company were transferred to Conrail.

The GG1 was a class of electric locomotive conceived in 1933. PRR wanted a new passenger locomotive and had General Electric (GE) and Westinghouse design prototypes. GE's GG1 won out over the Westinghouse R1. The GG1 entered service in 1935 and went on to serve successor railroads Penn Central, Conrail and Amtrak.

This mod adds the PRR GG1 with 7 variants of Pennsylvania (PRR) livery:

Features:
Technical Details:
Notes:
Dislaimer:
Author(s) take no responsibility for your hardware or software. Use this mod at your own risk.
< >
19 Comments

SmuggleMurph Feb 19, 2018 @ 8:57am
@dwebster73 Well it looks awesome! I am a fan of your work and the time you have taken and effort put into your mods are greatly appreciated.

dwebster73  [author] Feb 17, 2018 @ 8:39am
@SmuggleMurph - Good question. The way I do repaints is probably the hard way in which I edit a texture file in GIMP. For a typical paint job, I mainly need to edit 1 file with perhaps some touchup on other texture files. The Congressional (silver) required extensive edits to 3 texture files because of the metal effect.

SmuggleMurph Feb 14, 2018 @ 5:21pm
@dwebster73 "...The Congressional (silver) took soooooo long to complete." From a point of pure curiosity, how come, was it a difficult texture to get right?

Boko Disraeli Jan 31, 2018 @ 8:16am
Absolutely brilliant work. Thanks for taking my request and bringing it to fruition so quickly. I'm curious though, do you have any plans/interest in doing any rolling stock repaints?

I'm hoping everyone who already subscribed will get the update, but I'm not sure. If this doesn't happen for you, then perhaps you may need to resubscribe.

dwebster73  [author] Jan 28, 2018 @ 7:34pm
@Boko Disraeli - No problem. I would have this all done, but the Congressional (silver) is really dragging on as it requires extra work not required by the others. Should have everything done tomorrow (I hope).

Boko Disraeli Jan 28, 2018 @ 6:55pm
Great work man, sorry to have missed the release but these are fantastic. Thank you for your effort!

soldier312 Jan 26, 2018 @ 1:33am
Wow! Thought about that locomotive yesterday and actually was hoping for it to pop up in the workshop some day