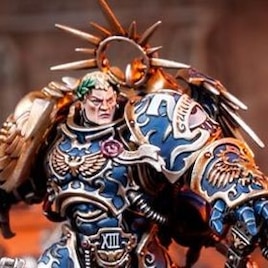 TheWise
Offline
See all 11 collections (some may be hidden)

This item has been added to your Subscriptions. Some games will require you to relaunch them before the item will be downloaded.
Description
The mod suddenly ceased to work due to unknown Steam glitch
Link to the newer working version (v. 0.9) is here: http://steamcommunity.com/sharedfiles/filedetails/?id=1290566811

The game is COMPLETELY remade to make it look and feel like WAR.

The mod is named "Closer_To_Codices" for a reason - overhaul was done WITH DUE REGARD to respective 8th Edition CODICES (Space Marines and Craftworlds ones) and Index: Xenos 2 (Orks).

1. Weapons actually KILL in my mod, and KILL RAPIDLY: for instance, even unupgraded Tactical Marines kill an Ork Boyz mob within 10 s.
2. It's not a problem, though - units are also spawned times faster, than in the original game to let you fill the battlefield with ACTION, BLOOD, GORE, FIRE, EXPLOSIONS, DEATH CRIES. For instance,10-strong Ork Boyz squad is spawned in just 6 seconds, 5-strong Tactical Marines - in 6.5 s. KILL COUNTS in post-game stats are merely ENORMOUS.
3. In fact - everything goes faster: units spawn faster, die faster, ability cooldowns are shorter, and action in general is more intense.
4. Weapons have certain ACCURACY - yes, even these mighty warriors do miss sometimes (some of them pretty frequently - like Orksez, for instance ... but damn, there're lots of them).
5. Units have ARMOR and weapons, respectively, PENETRATION .... you guessed right, Codex-related ones..
6. Weapon ranges are also Codex-related, being calculated by certain formula.
7. All HP values are calculated - yes, basing on tTOUGHNESS and WOUNDS attributes from the Codices..
8. Weapon damage is calculated basing upon Codex STRENGTH and ATTACKS attributes.
9. All vehicles are repairable.
10. All weapons have friendly fire on - thus throwing a grenade under own feet or shooting AoE weapons to the crowd, which includes your own troops takes a heavy toll.
11. Elites are - still being very useful - not crucial anymore, the game is perfectly playable even without them (which makes the gameplay way less MOBA-like, than it is in the original game).

1. Units from the latest update (Lifta-Droppa, Ironclad Dreadnought, Wraithseer) are not included due to their absense in the Relic's outdated Mod Tools.
2. Not all planned to be done is done due to - yes, extremely limited nature of the Mod Tools (yes, Relic, I mean that ... don't know, bug or intentionally made impossibility to clone with renaming).
3. Players, got used to the original game, will have to re-learn :-)).
4. This mod, in fact, is taylored for Annihilation and Annihilation with Defenses game modes, narcomaniac Power Core Mode untouched thus pretty useless in it.

P.P.S. If you like my mod - I'd appreciate, if you rated it (positively, of course), added it to favourites and shared it with your friends (to enjoy playing it together).

P.P.P.S. My mod's name in the respective dropdown list in the custom match screen is True_SM (for it was started as "making the Space Marines as they should be per Codex" and only some time afterwards it has grown into complete overhaul.
Popular Discussions View All (3)

RaversFantasyKB May 14, 2018 @ 8:10am
Very awesome mod, but will you ever be able to add more unique units? Like perhaps have the Space Marines be able to construct knights and the Orkz to construct similar machines like the Gorkanaught and Morkanaught, and lastly the Eldar to construct their elite units as well just with decreased stats.
This might be an excellent idea to me honestly, cause it feels like there is not enough destruction yet.

TheWise  [author] Feb 4, 2018 @ 11:52am
@Frostedawg
Must repeat - this mod won't be "No limit" one. The only more or less possible option is popcap increase for Orksez (and only for them!) to reflect their sheer numbers.

Frostedawg Feb 4, 2018 @ 11:32am
I love the mod i was just wondering if there is a way to include some higher pop cap options. I know there are no limit mods but they dont include the changes this mod makes. If not its all good but i was just curious.