Store Page
Transport Fever>  Workshop > DannyT's Workshop
This item has been removed from the community because it violates Steam Community & Content Guidelines. It is only visible to you. If you believe your item has been removed by mistake, please contact Steam Support.
This item is incompatible with Transport Fever. Please see the instructions page for reasons why this item might not work within Transport Fever.
Current visibility: Hidden
This item will only be visible to you, admins, and anyone marked as a creator.
Current visibility: Friends-only
This item will only be visible in searches to you, your friends, and admins. 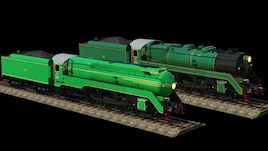 This item has been added to your Subscriptions. Some games will require you to relaunch them before the item will be downloaded.
In 1 collection by DannyT
Mods created by DannyT so far...

12 items
Description
One of the most iconic Steam train in Australia, fully built with parts sourced from all over Australia. Streamlined versions were first came into service, the design was heavily influenced by American New Haven Class I-5 Hudson. While no Hudson I-5s were ever preserved, the class leader 3801 and its unstreamlined sister 3830 has since been running many heritage excursions within Sydney. On 2007 they were put away in the depot for boiler replacement (2 boilers delivered from Germany for 3801: one for replacement, other as a spare), this year 2018 will see them back on the track after 11 years.
Available: 1943
Top speed: 136 km / h (85 miles / h) Streamlined, 130

Features:
* PBR textures, with material reflection and effects
* Texture compression and multiple levels of details for less stress on

your computer.
* Player selectable colours, you can choose your preferred shade of green !
* Dirt and rust aging.

Rafn Feb 14 @ 12:28pm
I am not worried about this being Australian - I would like to see it ported simply because it is one of the highest quality locos on the workshop.

Big Dave Feb 14 @ 11:55am
Will you be porting or allow a modder to port your work to TPF2? We are desperate for Aussie rolling stock

Havoc B Jul 4, 2019 @ 1:27am
The reason why the 38 streamlined ( 3801-3805 ) had less power, was identified by a fireman imported from Bathurst, which was rectified a few months later. see, the streamlined, as they came out of the shop, were nearly impossible to stoke to keep up steam at 245 PSI, their designed operational output. the reason for this was discovered by the fireman, after asking to inspect the Blastpipe on 3801.

he discovered that the Blast pipe's shape was wrong, and not cleanly letting the steam clear the chimney's apron, which catches the steam and sucks it out the top. this meant that the draught on the firebox was adversely affected. with the blastpipe redesigned, the streamlined 38's were just as powerful as their unstreamlined cousins, though the unstreamlined were easier to maintain because of not having to remove said streamlining for maintenance, which could also be reflected in the game. it could also be a later retrofit version of the 38's streamlined with the restored power

Rafn May 22, 2018 @ 4:33pm
Beautiful work. Also I think this is the first workshop locomotive I've seen that looks good in just about any color available ingame.

DannyT  [author] Apr 23, 2018 @ 12:53am
The person who is going around all my mods giving me a negative rating please explain what I have done wrong for you ? If there is anyway I could fix things for you ?

If this keeps up I will reconsider where and when I release my mods... Be nice, I have spent countless hours working on all these train mods with my own time and fork out my money for softwares and tutorials, been doing this since the game was released... If for whatever reason I don't get my exposure because of this, things will change !