Store Page
Team Fortress 2>  Workshop > Jusa's Workshop
This item has been removed from the community because it violates Steam Community & Content Guidelines. It is only visible to you. If you believe your item has been removed by mistake, please contact Steam Support.
This item is incompatible with Team Fortress 2. Please see the instructions page for reasons why this item might not work within Team Fortress 2.
Current visibility: Hidden
This item will only be visible to you, admins, and anyone marked as a creator.
Current visibility: Friends-only
This item will only be visible in searches to you, your friends, and admins. 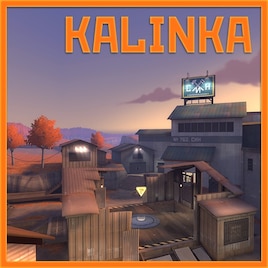 хвзз
Online
See all 94 collections (some may be hidden)

This item has been added to your Subscriptions. Some games will require you to relaunch them before the item will be downloaded.
Description
Remember to rate and subscribe if you like the map!

5CP map set inside a Soviet Russian chemical plant, where СИН (BLU) and КРС (RED) fight over the control of secret research labs both teams have hidden inside.

The map has been designed for pub gameplay, also keeping comp gameplay in mind.

Kalinka was played in Season 25 of UGC 6s

Huge thanks to everyone who played the map and provided feedback during the developement.

TF2Maps.net for all the help and feedback.
Teamfortress.tv for the playtests and feedback.
Lucrative and all the players playing in his high skill playtest pugs.
Exactol for the amazing particle effects.
Frontline team for the assets used.
Fubar for the sexy pipes and custom shutters.
Crowbar for stripeless metal textures.
MaccyF for brick texture without the ugly bumpmap.
Muddy for the distorted Cossack Sandvich.
XB33 for some cool soviet props.


The map uses a custom soundscape and soundscripts but those seem to break when uploading to the workshop.

Jusa  [author] Oct 20 @ 5:59am
I don't think its on any server 24/7, but it should be on the creators.tf servers at least. Check teamwork.tf to find servers that have the map.

Senpai Otъеbis Apr 21 @ 7:21pm
I want to port this to mod for TF2 named Open Fortress. Can i do it? Can you give me permission?

Capitalist Frenchy Apr 7 @ 8:31am
This map made for some of the best 5CP games I've ever had. There was tons of back-and-forth, and the chokepoints and sightlines were always reasonable, never overused. A map of the most Esteemed Quality!

thanks creators.tf for introducing me to this amazingly creative map

definetely want this in the game officially!

Jusa  [author] Mar 7 @ 9:38am
Oh nice to hear it was included in creators.tf! Cap time on the last point can be adjusted easily if needed. Thanks for letting me know.
< >