Store Page
Space Simulator > Guides > Brixton Dynamics's Guides
This item has been removed from the community because it violates Steam Community & Content Guidelines. It is only visible to you. If you believe your item has been removed by mistake, please contact Steam Support.
This item is incompatible with Space Simulator. Please see the instructions page for reasons why this item might not work within Space Simulator.
Current visibility: Hidden
This item will only be visible to you, admins, and anyone marked as a creator.
Current visibility: Friends-only
This item will only be visible in searches to you, your friends, and admins.

TLI. Art and Science of Translunar Injections
By Brixton Dynamics
By far one of the most complicated maneuvers in the Apllo Program. This little guide will teach you how to plan, compute and execute translunar injections.

The problem with real physics. Why a Hohmann won't do.

How close is too close? Lunar sphere of influence

Comments
Trans Lunar Injection Introduction
Trans Lunar Injection, commonly abbreviated as TLI, refers to the orbital maneuver in which a spacecraft, which is orbiting the Earth, is sent across the translunar space in a path that eventually gets close enough to the Moon to allow the spacecraft to be placed into a stable lunar orbit via a further maneuver (Lunar Orbit Insertion).

Apollo 8 was a surprising mission in a lot of ways. Due to the very real possibility that the Soviets could beat the US -not in landing on the Moon, but performing a much easier 'Moon fly-by' mission- the entire Apollo program was rushed into sending a manned spacecraft to Moon orbit.

Actually TLIs weren't new. They were performed previously in a series of lunar unmanned probes. The manned TLIs were however a bit more demanding.

Due to the novelty of the rocket, hardware and software, reliability was always in doubt. As such, it was preferable that after TLI, if everything else failed (i.e. no possibility of further maneuvers, etc.), the spacecraft would return to Earth anyway. This requirement was known as a Free-Return Trajectory.

The Moon is a satellite surprisingly massive and close to its planet. This has very serious implications on the stability of possible orbits. Most lunar orbits won't be stable outside of a very narrow range of inclinations. For all practical purposes, TLI tries to get to achieve an equatorial (zero-inclination) lunar orbit.

The problem with real physics. Why a Hohmann won't do.
Frequently tutorials and guides on the topic of translunar injections refer to the 'Hohmann transfer orbits'.

While they can be an approximation of the problem, in reality the TLI path bears no resemblance whatsoever to a Hohmman transfer orbit.

* The gravity force, which while diminishing with the square of the distance, still affects every object in the universe. This means that during TLI, the spacecraft is affected by the Earth, the Moon, the Sun and in a tiny way all other major bodies of the solar system. The spacecraft is affected by the Moon from the moment it is launched. The further it gets from Earth and the closer it gets to the Moon, the Moon gains more and more influence over the spacecraft's path.

* something known as the '3 body problem' or more precisely a 2.5 (two and a half) body problem where a massless body is affected by 2 sources of gravity.


A Hohmann transfer orbit only makes sense when the orbital target has negligible mass, e.g. a satellite, an orbital station, etc. For heavy targets such as the Moon, the attraction of the target is so huge that it totally deforms the orbit.

Also, it is important to remember that upon arrival the target (Moon) will accelerate (or decelerate) the spacecraft via orbital slingshot. Should a spacecraft be launched as in the classical example of a transfer orbit, upon arrival at the Moon it would be catapulted into outer space with the extra velocity added to it.

So exactly which 'shape' should a real Translunar orbit have?

This is how it looks as 'seen from an Earth reference'. The yellow ellipse is the Keplerian 'theorical' orbit if the Moon didn't have mass. The pink trajectory is the REAL expected path of the spaccraft. It can be seen that when close to the Earth, the spacecraft follows its original theoretical orbit, but soon enough, it starts to diverge towards the Moon. At the end, the path bears no resemblance to the original orbit, which actually changes constantly over time 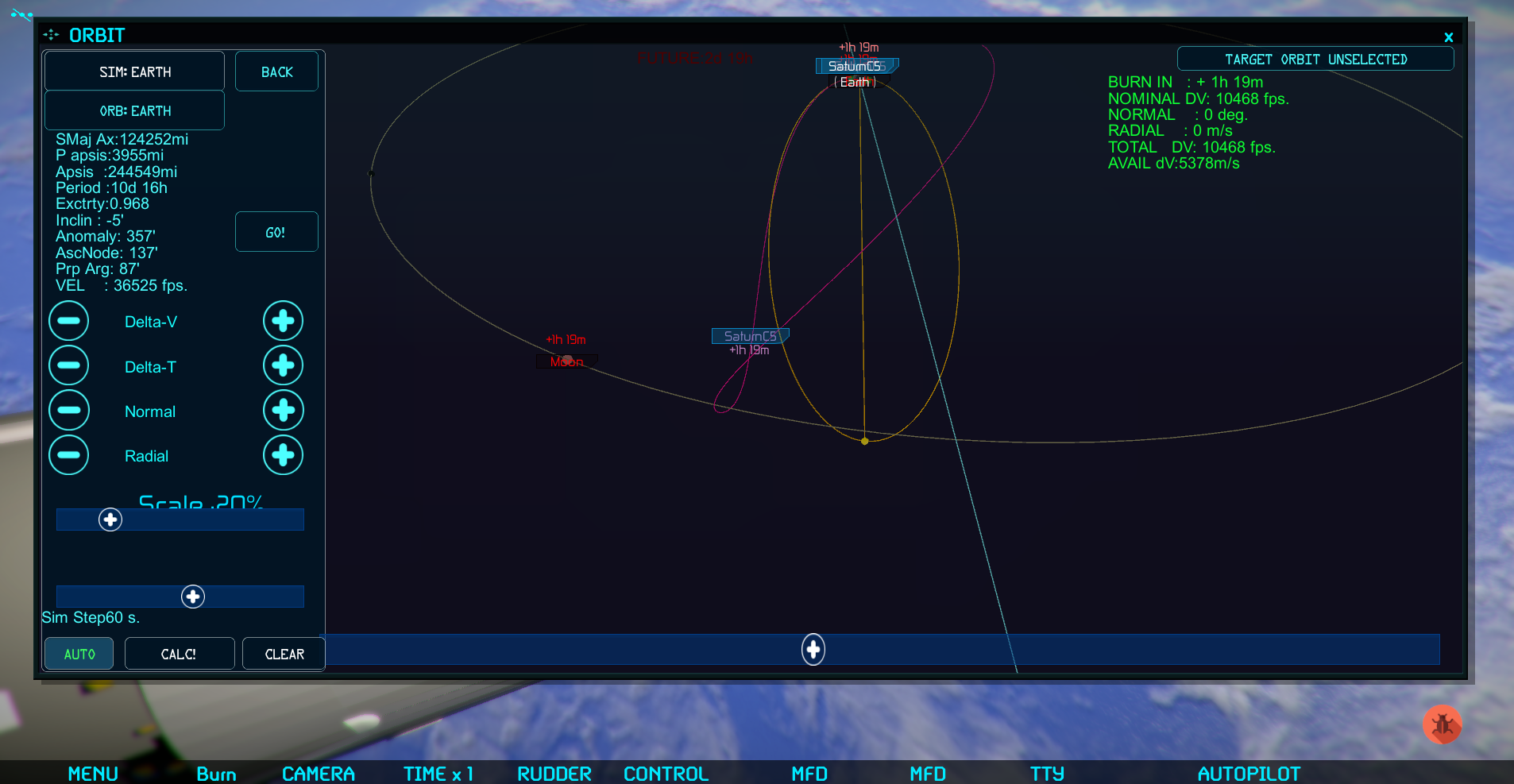 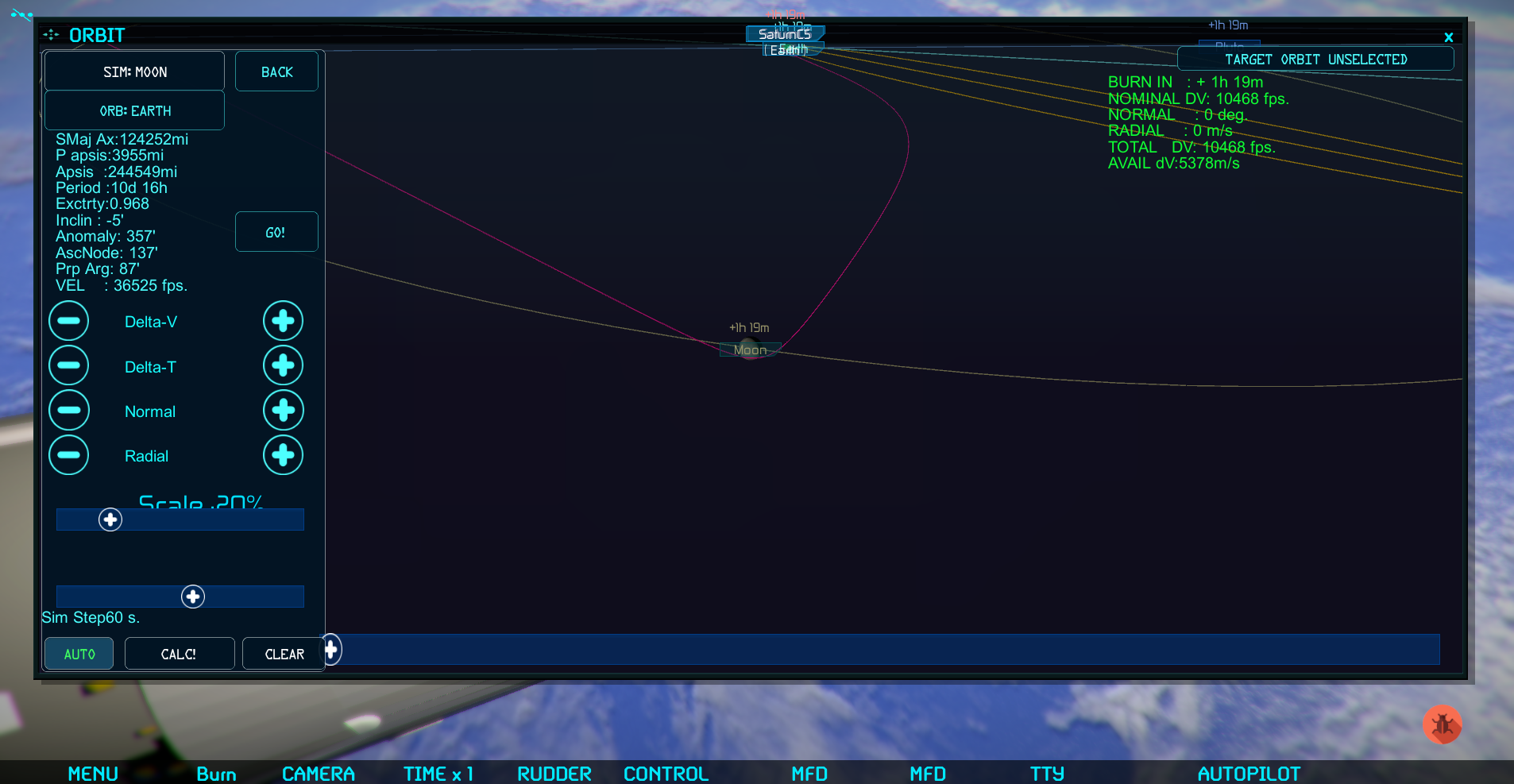 Orbital Planes and Launch Windows.
The path of a spacecraft following an orbit lies on a single plane.This plane is known as the Orbital Plane.

Indeed, given the small fuel allowances of the lunar missions, it was paramount that spacecrafts were launched and inserted into an Earth orbit of the same inclination (i.e. same orbital plane) as the Moon's orbit.

However, inserting into an orbit of a particular inclination is not as simple as selecting the correct launch heading. It also requires the launch point/pad to be IN the same plane of the target orbit.

Example: Launching from Kennedy Space Center at 12:30 on 21 Dec 1968 with an orbital attitude of 73 degrees will inject into an orbit lying on the same orbital plane as the Moon. The spacecraft's green orbit and the Moon's brown orbit are in the same plane- 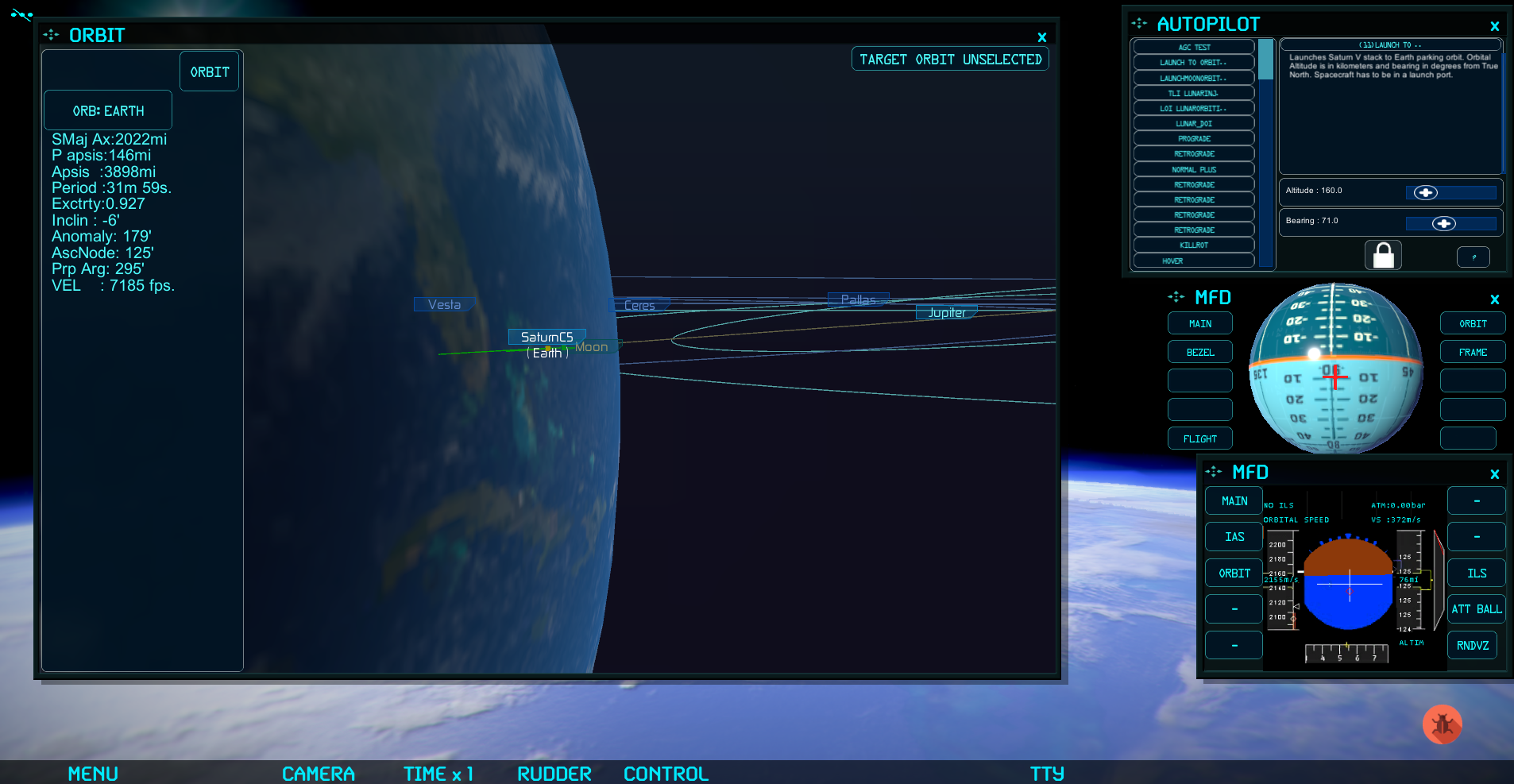 However, on a different date (or worse, from a different latitude) when the launch pad itself is outside the orbital plane, there is no bearing for launch that would get the spacecraft into the same plane as the Moon.

An 'eight shaped' loop?
Why do TLIs inject into an 8-shaped loop orbit?

Please note that the 'loop' is necessary in order for the spacecraft to inject into a retrograde lunar orbit. In this approach the Moon helps slow down the trajectory of the spacecraft, allowing for a free return trajectory.

How close is too close? Lunar sphere of influence
Why is the Moon is such a difficult satellite to orbit?

The Earth-Moon system is atypical. Usually, satellites are proportionally much smaller than the Moon. This means that the lunar sphere of influence is abnormally large.

During the TLI burn phase a decision is taken about how far from the surface of the Moon should the spacecraft pass. Too low and there could be the risk of the unthinkable. Too far and it may not get fully trapped into the lunar field meaning no free-return trajectory.

Also, there are altitudes at which lunar orbits are not stable. While the spacecraft at those orbits won't crash with the lunar surface, the resulting orbit would be chaotic and extremely complicated to precompute.

Here, we can see in this in game simulation of the next 200 lunar orbits that the main orbital parameters (i.e. the shape of the orbit) remain relatively constant. 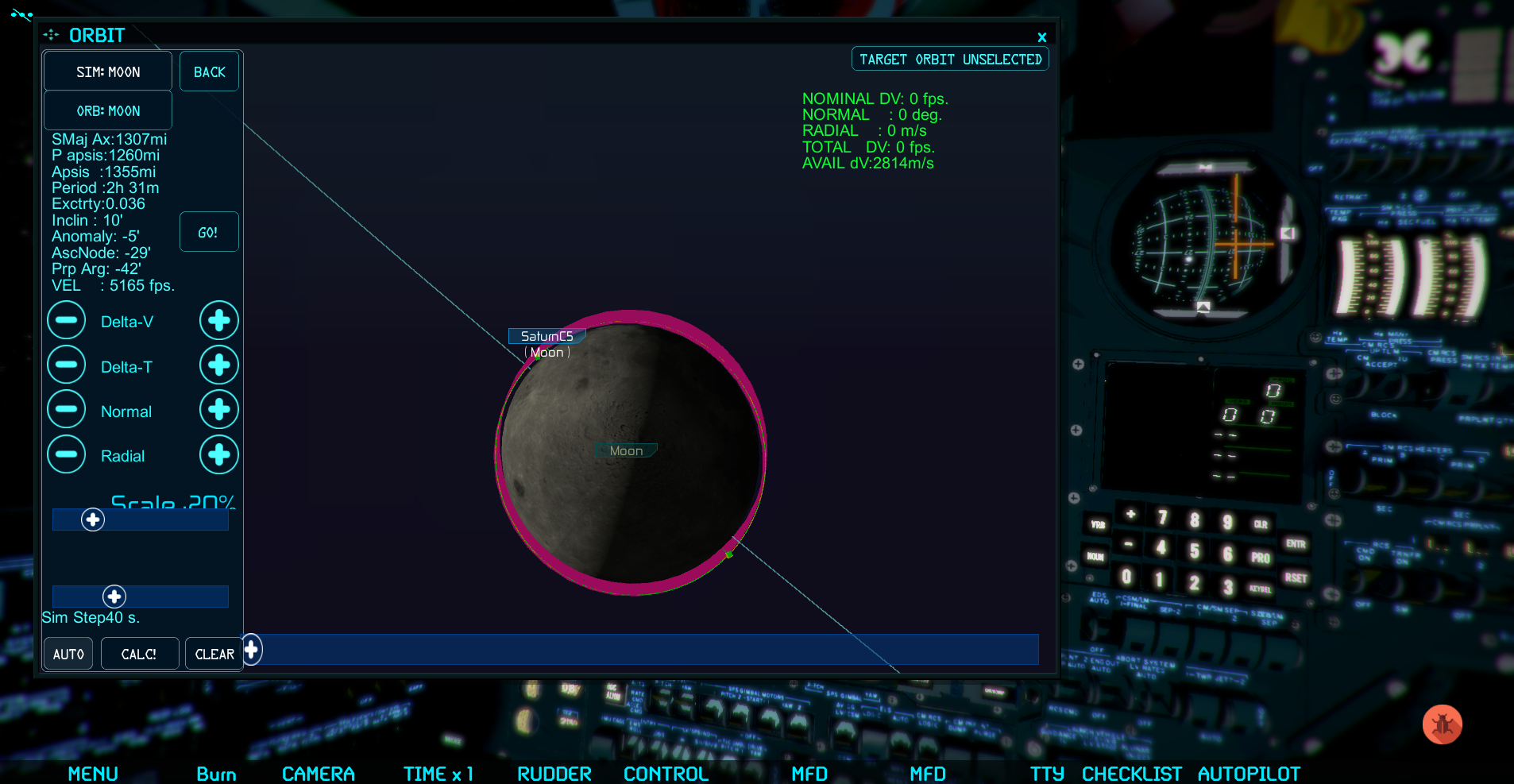 In this other simulation, we can see that as the altitude of the orbit increases, the orbits turn into an unpredictable chaotic system. The orbit eccentricity, semiradius and even the longitude of periapsis change over time. This is a very undesirable orbit as It would make predicting the position of the spacecraft extremely difficult. 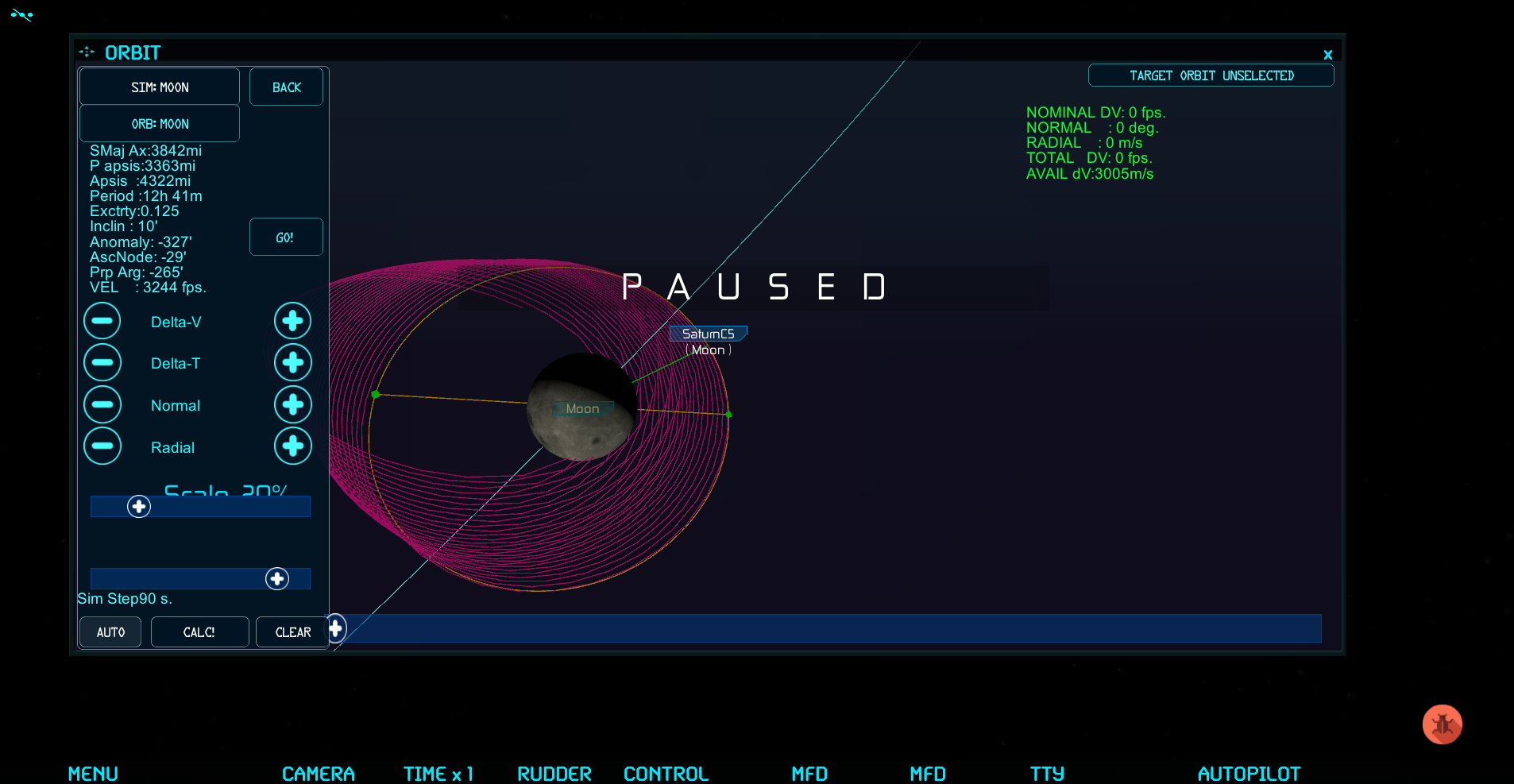