Store Page
Stellaris>  Workshop > Violent Beetle's Workshop
This item has been removed from the community because it violates Steam Community & Content Guidelines. It is only visible to you. If you believe your item has been removed by mistake, please contact Steam Support.
This item is incompatible with Stellaris. Please see the instructions page for reasons why this item might not work within Stellaris.
Current visibility: Hidden
This item will only be visible to you, admins, and anyone marked as a creator.
Current visibility: Friends-only
This item will only be visible in searches to you, your friends, and admins. 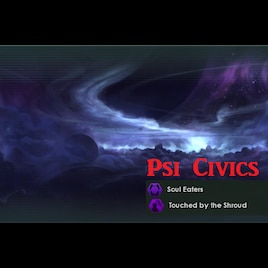 Violent Beetle
Online
See all 460 collections (some may be hidden)
You need DLC to use this item.

This item has been added to your Subscriptions. Some games will require you to relaunch them before the item will be downloaded.
Description
The mod is currently in development, expansion expected. Feedback regarding the balance for Soul Eaters would be greatly appreciated.

As the name implies, the mod adds two civics. They are easily identified by their magenta coloration:

Touched by the Shroud
This is a simple civic designed in spirit of "mechanist", bringing empire closer to psionic ascension, at the expense of civic slot.

From the start, the empire will have free Zro deposit (Increases sensor range and FTL speed, reduced shroud contact cost).
Once empire unlocks its first ascension perk, it will soon get "Psionic theory" technology. In other words, the empire will be streamlined on its psionic ascension path and enabled to contact shroud more easily.

Empire must be spiritualist.

Soul Eaters
This civic is the main attraction. Unlike proper purifier civics, you are not barred from diplomacy, but you are strongly disliked by most other empires. Your goal is to stay on offensive, as your empire relies on fresh supply of xeno souls to sustain it. The more pops are in your empire, the faster your supply will be depleted, giving your pops production penalties and driving them to military frienzy.

The civic has associated governments and AI personality that is supposed to grow more agressive the hungrier it gets.

Soul Eaters also gain access to shroud-esque "Bleak Vortex" which is the source of their corruption. At the moment you can only purchase souls from it in exchange for planets when you hungry, or trade your soul stockpile for a temporal boon, however an expansion is planned.

Both civics are enabled for the AI (Although how well do Soul Eaters fare is uncertain at the moment. The mod also adds two perscripted empires - Wadwen Hollowers and Council of Allidar Magi that use the civics.

Compatibility
The mod overwrites 2 ascension perks (for synthetic and psionic ascension) and one technology (Psionic theory) to deny it to Soul Earters. This might interfere with mods that overwrite entire files or somesuch.
< >
91 Comments

The really derpy alien Sep 5, 2019 @ 11:10am
@mayhemx8 the mod Project Gestalt has a updated version of both of these civics.

I would like to ask you for a permission to re-integrate your mod into my after your update.

At the moment I'm not entirely sure what I want to do with it, so it might take time.