Store Page
Tabletop Simulator >  Workshop > Bone White's Workshop
This item has been removed from the community because it violates Steam Community & Content Guidelines. It is only visible to you. If you believe your item has been removed by mistake, please contact Steam Support.
This item is incompatible with Tabletop Simulator. Please see the instructions page for reasons why this item might not work within Tabletop Simulator.
Current visibility: Hidden
This item will only be visible to you, admins, and anyone marked as a creator.
Current visibility: Friends-only
This item will only be visible in searches to you, your friends, and admins. 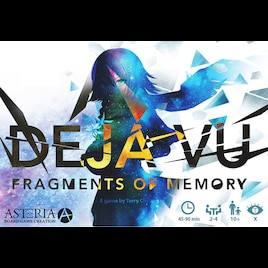 Bone White
Offline
See all 5 collections (some may be hidden)

This item has been added to your Subscriptions. Some games will require you to relaunch them before the item will be downloaded.
Description
A digital 2-player version of the upcoming kickstarter board game Deja Vu: Fragments of Memory [www.boardgamegeek.com]

Want the physical game? Back it on Kickstarter

The basic game flow is:

1) Obtain wooden tokens (Impression Bits) by a sowing mechanism (take all tokens from a tile, dropping one on each other tile on the way of "sowing", and finally taking all tokens of the same color on the last tile).

2) Use the collected Impression Bits to fulfill the requirement for placing cards on a player's tableau, building up a "card engine" to reinforce the effectiveness and efficiency in taking actions and scoring VPs.

3) When any player has 10 or more cards in his tableau, the game ends and the players with the most VPs win.

As the nameless girl returned to consciousness, she found herself lying in an egg-like space pod, holding a bowl of luminous blue flowers, and her forearm was tattooed with some kind of alien symbols.

Looking out through the fuselage window, a shooting star darted across the sunny green sky. Suddenly a strong Deja Vu feeling struck her mind - something important must had happened to her there in the past.

In the space pod’s computer, there was a black box with records of all the planets it had visited. Bewildered but resolute, she set out to revisit all the planets in reverse order, in the hope of retrieving all her lost memories.

In the game of Deja Vu: Fragments of Memory, players are mysterious being called cosmic spirits, helping the nameless girl collect her scattered memories across the universe, and bring them together into a coherent mental picture in her mind.