Store Page
Tabletop Simulator >  Workshop > Arcardion's Workshop
This item has been removed from the community because it violates Steam Community & Content Guidelines. It is only visible to you. If you believe your item has been removed by mistake, please contact Steam Support.
This item is incompatible with Tabletop Simulator. Please see the instructions page for reasons why this item might not work within Tabletop Simulator.
Current visibility: Hidden
This item will only be visible to you, admins, and anyone marked as a creator.
Current visibility: Friends-only
This item will only be visible in searches to you, your friends, and admins. 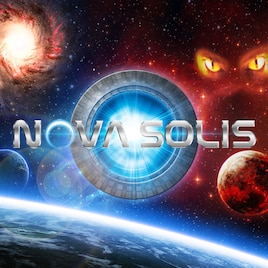 Arcardion
Offline
See all 4 collections (some may be hidden)

This item has been added to your Subscriptions. Some games will require you to relaunch them before the item will be downloaded.
Description
eXpand, eXplore, eXploit, eXterminate!

Nova Solis... The legendary home of the Ancients...

A tiny pocket reality containing untold treasures untouched since the Ancients’ departure from our universe.

When a functioning gate was first discovered it became a race for the great empires of the galaxy to be the first to mount an expedition and claim the riches of Nova Solis. In our greed we did not stop to consider why the Ancients abandoned Nova Solis until we encountered the Entity...

Its attacks came from out of nowhere and decimated our defenses... Great fleets of ships made from shadow pouring out of enormous tears in the fabric of space.

Its power is growing and the black hole is becoming more active... Even worse, many of the stars near the Nova Solis gate are becoming unstable... We have to get out of here but we can’t let this thing enter into our universe... Our only hope is to recover the ancient knowledge and to seal it inside!

Nova Solis is a semi-cooperative 4X (eXpand, eXplore, eXploit, eXterminate) space game for 1 to 6 players where the players must work together to survive against the malevolent Entity while also trying to claim the riches of Nova Solis to lead their empire to victory!

The game features the following:

- eXpand with 6 Asymmetrical player Empires each with different technological advantages.
- eXplore a dynamically created game board. Scan distant stars for resource containing planets, asteroids and nebulae and discover them onto the game board.
- eXploit a deep technology and strategic resource system with over 60 different upgrades.
- eXterminate the autonomous AI controlled opponent using a unique dice-crafting combat system.

Initially the players will start with a small fleet of ships and limited resources which they will use to colonize sectors, build their forces and develop new technology. As the game proceeds, the Entity will grow in power and its attacks will become stronger, eventually causing a supernova explosion that will annihilate the players!

Nova Solis can also be played Solo, Fully Co-Operative or as a Fully Competitive experience.

Arcardion  [author] Apr 4, 2020 @ 1:50am
Hi flamkueche
Make sure that you have flipped over the player boards with the F key to the play side
Also, you may need to got to your tabletop simulator image folder and delete all the cached images to ensure the correct new images download correctly, the software doesn't do that for you (terribly annoying especially when developing)

Arcardion  [author] Nov 8, 2018 @ 12:19pm
Working on a fully digital implementation of this... Unity based.
Check out the screenshots at https://www.facebook.com/gravitysoft
< >