Store Page
Train Simulator>  Workshop > AirbourneAlex's Workshop
This item has been removed from the community because it violates Steam Community & Content Guidelines. It is only visible to you. If you believe your item has been removed by mistake, please contact Steam Support.
This item is incompatible with Train Simulator. Please see the instructions page for reasons why this item might not work within Train Simulator.
Current visibility: Hidden
This item will only be visible to you, admins, and anyone marked as a creator.
Current visibility: Friends-only
This item will only be visible in searches to you, your friends, and admins. 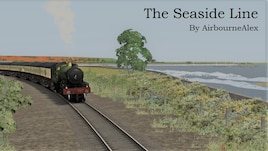 AirbourneAlex
Offline
See all 8 collections created by AirbourneAlex and other people (some may be hidden)
You need DLC to use this item.

This item has been added to your Subscriptions. Some games will require you to relaunch them before the item will be downloaded.
In 1 collection by AirbourneAlex
AirbourneAlex's Routes

A fictional route set on a modern preserved line somewhere in the west of Britain. The line follows the coast, meandering into the countryside at either end. This route is ideal for testing out locomotives, creating your own virtual collection of preserved rolling stock, and setting up fictional gala events. It's also great for taking screenshots!

This route was first released on the workshop back in 2016. Since then it has seen various updates and extensions. The route build began back in 2014 and lots of time and fustration has gone into building it. The aim of the project was to create a high quality route with minimal requirements. As of now, the route is final with fully functioning quick drives, working signalling and completed scenery.

This route is now final. Scenarios for this route will now function on the steam workshop.

Details:
-Length: 14 Miles.
-Mean Speed: 25 Miles/hour or 45 Miles/hour in some stretches. (Superelevated where appropriate).
-Type: Preserved (With a connection to the mainline).
-Time to Traverse: 45 minutes to 1 hour.
-Number of Stations: 8.
-Number of Depots: 3.

There's also a Modified version of the route with the addition of 3rd Rail, produced by Johnno124:
http://steamcommunity.com/sharedfiles/filedetails/?id=1282601100

All Comments are Welcome.

NoOne Apr 30, 2020 @ 11:47pm
Thanks for the exellent route! This route has the same quality as the original DTG TS routes. Can I make some scenarios on this route for steam workshop?

AirbourneAlex  [author] Jun 9, 2019 @ 6:27am
Thanks Purno. Just proves you can still make a decent route with so few requirements...

AirbourneAlex  [author] Mar 6, 2019 @ 3:17am
Best watching some YouTube tutorials on route building. Once you know what all the buttons do and have some practice, doubling this route would be quite straightforward.

Railfan Mar 5, 2019 @ 1:47pm
Thanks for the advice. You wouldn't mind giving some support as to how to modify the route (i.e. lay double track the whole way)? I'm a little rusty when it comes to using the route editor.

AirbourneAlex  [author] Mar 5, 2019 @ 1:05pm
If you delete the signal the AI train would continue uninterrupted. Only problem is if another train was ahead of it in the platform, they would collide, or the service would wait at another signal back up the line. Depends on how many AI services you are running.

And at this time I have no intentions to further modify this route as I'm satisfied with how it is now. But I have no problem with others modifying the route if they like.
< >