Greenlight > Games > Nekki's Workshop
Greenlight is being retired. For more information on how to submit games to steam, refer to this blog post.
This item has been removed from the community because it violates Steam Community & Content Guidelines. It is only visible to you. If you believe your item has been removed by mistake, please contact Steam Support.
This item is incompatible with Greenlight. Please see the instructions page for reasons why this item might not work within Greenlight.
Current visibility: Hidden
This item will only be visible to you, admins, and anyone marked as a creator.
Current visibility: Friends-only
This item will only be visible in searches to you, your friends, and admins.
Vector
Description Discussions18 Announcements8 Comments1905 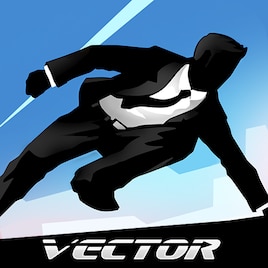 Nekki
Offline
See all 216 collections (some may be hidden)

View Vector in the store

The wait is finally over: Climb, vault, run and slide through the future Megapolis while Big Brother is hunting you!
Play the full version (now 30% off) or give our demo a try: Link

Fellow free running fans - the time has finally come! Vector for Steam is going to be released on 3rd/4th of december depending on your time zone. Be ready to vault, climb, slide and jump through a futuristic HD megapolis!

Read More
Description
Release date: December 2013
Vector is an exciting arcade-style platform game featuring you as the exceptional free runner who won't be held down by the system. Set in the dystopian world of the near future, it challenges you to escape your pursuer through different parts of the high-tech megapolis, solve jumping puzzles and learn numerous parkour moves.

This Greenlight project features the PC version of the mobile game, which is already available for the iPhone and iPad:
{LINK REMOVED}http://nekki.com/vector/

FAQ
Is it another endless score-based runner?

No. The main part of the game is a series of finite game levels. But Vector is not a finished project, and an endless game mode is still in the pipeline.

Is your game inspired by Canabalt or Mirror’s Edge?

Yes and yes. We think that the Vector gameplay is somewhat different though.

Will there be a level editor?

We intend to share the level editor we’re using to the public soon after the game is released. In fact, the game itself is highly moddable. PC users will be able not only create levels of their own, but even tweak game rules changing the game’s XML files.

What are system requirements going to be?

System requirements are to be determined yet.

What's the replayability going to be in this game?

Vector is much like Portal or Mirror's Edge in terms of replayability. Once you solved a puzzle, you don't need to return to it.
...except that you'll want to return to achieve that delicious 3-star rating, unlocking new bonus tracks and locations.
...and to compete in bonus modes like the Hunter mode, in which YOU chase your opponent to shock them with your trusty taser.

Would there be a way for me to pick up where I left off on my iOS device from the PC?

No. PC and iOS versions are different games and your progress in both of them isn't exactly comparable.
< >
1,905 Comments

Vector has been Greenlit and is now listed in the Steam store. For the latest information, purchase options, and discussions for Vector, please see it on the Steam Store or in the Steam Community.
Visit Store Page
For more details Visit Community Hub
For latest discussions
If you really, really want to, you can continue to the Greenlight page. Information on this page may be out of date, since all the action has moved to the areas noted above.