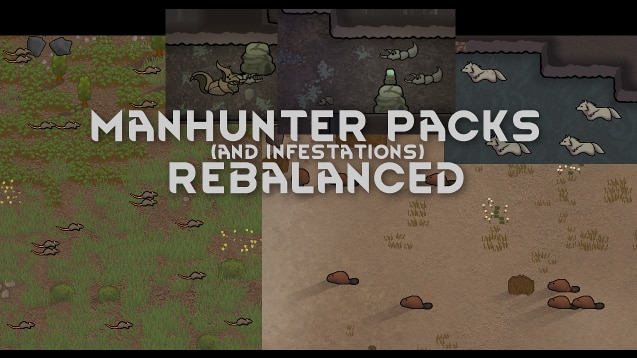 XeoNovaDan
Offline
See all 70 collections (some may be hidden)

This item has been added to your Subscriptions. Some games will require you to relaunch them before the item will be downloaded.
Description
Direct download from GitHub[github.com].

Compatibility
I haven't patched any animal mods to be rebalanced yet, but they'll still work fine. Dinosauria's animals have already been calculated on the spreadsheet used to calculate the combat power ratings though so expect an update for that in the future.

This mod should work fine with other mods such as Hardworking Animals and Animal Logic.

In theory, this can also be added to and removed from existing savegames without issue since it only patches Combat Power values for animal PawnKindDefs.

As a result, boars are now worth 80 points rather than 55; megascarabs are 55 rather than 40; spelopedes are 165 rather than 75; megaspiders are 270 rather than 150. Boomalopes are 65 rather than 95 since they're slow, large, fragile and have a tendency to chain react. Many other animals were changed too though.

What's factored into the new formula for 'Combat Power' ratings:
Here's just the spreadsheet[www.dropbox.com] for those that want to perhaps patch or amend to their animal mods or something like that - maybe even experiment with or come up with a better formula. Do note that for animals like boomrats, their explosion wasn't factored in; I added a value on myself.

For those that don't know what 'combat power' ratings do: the size of a manhunter pack, like raids, is determined by using 'points' which is influenced by colony wealth; population and how long the colony's been around for. Think of the points as a budget, which the game uses to 'buy' hostiles to attack your colony. The higher a pawn's 'combat power' rating, the more they cost when using this analogy.

While one can argue that the new combat power ratings that this mod introduces are purely from a theoretical standpoint whereas vanilla's combat power ratings are based on results from practise, the 'battle royale' mode used to test the latter is completely random in terms of pawn pairings and therefore results will be skewed to varying degrees. I tried my best to ensure a mostly accurate replication of in-game conditions in the new formula though.

License
As is standard with my mods: you may include this mod in a mod pack, and you may derive from this, but please inform me if you're doing so either through here or Ludeon Forums, and give credit where credit's due.
< >
15 Comments

TheGster Feb 26, 2018 @ 11:00am
actually just went through my mods and saw i accedenally disabled it lol

TheGster Feb 26, 2018 @ 10:48am
@XeoNovaDan, it appears to be working fine with No Infestation - No More Ridiculous Backstabs mod!

XeoNovaDan  [author] Feb 20, 2018 @ 1:17pm
TheGster - Never actually played around with the no infestation mod since I'm fine with them. I'd assume it only removes the event though, in which case this will still work with it, yes.

TheGster Feb 20, 2018 @ 12:26pm
ok so i hate the infestation thing in the game, so have "no infestation - no more ridiculous backstabs!" mod on, will this work with the no infes. mod, so it only balences animals, or will it not work?

onidlorah Jan 10, 2018 @ 5:09am
Thats totally understandable and allright i am totally not a computer person so to speak and i find it wonderous how you guys make all these mods and complete this game so well ... so good even that i dont know which mods i want to take and i want to use them all lol :P but i like the part that i can insert a lot of animals so that it ads variations and i thought with this mod that it would add also maybe variations to the man hunter packs so to speak ... and as i dont know anything about modding thats why i was asking it .... :D well i subscribed to your mod and when the patches come out i will certainly be one of the first to use them. Thanks a million for the quick reply and have a good start of the year. sincerely haroldino

* I haven't got around to actually working on patches yet since motivation's been rather low.
* This should work fine with both mods you mentioned, yes. I'll add that to the compatibility notes section.

onidlorah Jan 9, 2018 @ 4:12pm
hey xeonovadan i was wondering if this mod would also include new creatures of other mods that they would be included into the manhunterpack or if this mod would be compatible with mods that change creatures like the hardworking animals b18 & animal logic mod. Thanks in advance and sorry to take your time