Store Page
Stellaris>  Workshop > Trace Projectile's Workshop
This item has been removed from the community because it violates Steam Community & Content Guidelines. It is only visible to you. If you believe your item has been removed by mistake, please contact Steam Support.
This item is incompatible with Stellaris. Please see the instructions page for reasons why this item might not work within Stellaris.
Current visibility: Hidden
This item will only be visible to you, admins, and anyone marked as a creator.
Current visibility: Friends-only
This item will only be visible in searches to you, your friends, and admins. 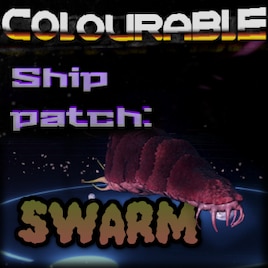 Trace Projectile
Offline
See all 153 collections (some may be hidden)

This item has been added to your Subscriptions. Some games will require you to relaunch them before the item will be downloaded.
Description
This is a retexture for the swarm ships that allows their shells to be recoloured to your primary emblem colour. Also includes one bonus AI upscaled texture.
It does not add a standalone ship type, it only changes swarm shell colours to their current owner. Should also work for living ship mods.

The mod will still have some features even if applied to the base game (see below.)


The main use of this mod is so that, say you use swarm ships on two empires and they have a war, their fleets will be visually distinct.
For example, two swarm empires clashing might look like a fleet of green-shelled monsters fighting brown-shelled.

- Biological/Hijacked Prethoryn strike craft will have a splodge of paint on the tail to show your side.
- Compatible with palette expansions (try a jet black shell)
- Differentiate your hive custom empires!
- If you gain Prethoryn ships via mods or game events, they will be coloured to your empire.
- Now included a double resolution replacer for the fighter! (Used as a corvette in some mods.)

- Only the shells are coloured. I originally made the entire texture colour, but have since moved to a more serious method by using mainly the hard outer shell pieces.
- Glowing orifices aren't coloured to your flag. I think it helps the vanilla crisis maintain a their look anyway.
- The colours are dark. Think like the Reptilian war stripes rather than humanoid glowing parts. It's harder to make out darker colours like red, but it looks great for gritty, evil hues.
- Crisis-spawned Prethoryn will have deep red shells rather than grey.
- This is not a shipset, it is a retexture for any swarm ships that don't have custom textures.

These aren't even outright negatives, just things to keep in mind.

// This mod is newly updated again because NSC have remade their swarm ships (outdated already) and the mod "Forgotten Queens" has made living ships popular. Technically this still works on any Prethoryn mod that doesn't use renamed files! //

You're free to open up my mod (should be folder 1229307015 in your Workshop files) to look at how the textures work or what have you, like if you added a separate ship model variant and wanted it to use its own texture.
I know you didn't ask but just if you wanted to, you can go ahead.

Pilgrim Jul 15 @ 2:26am
I have added a link to this from my Playable Swarm Ships (standalone) mod https://steamcommunity.com/sharedfiles/filedetails/?id=2532923000

Wish I had your texturing skills!

Trace Projectile  [author] Apr 13, 2020 @ 11:05pm
No prob. I thought there'd be more swarm shipsets, maybe someone should make a new and actually good one.

TTtime Apr 13, 2020 @ 11:02pm
unfortunately you only get the shipset with one particular origin with the hive dlc ;( sadness. thanks anyways

Trace Projectile  [author] Apr 13, 2020 @ 10:57pm
Yep!
'Unofficial Hive DLC' I think has some living ships - https://steamcommunity.com/sharedfiles/filedetails/?id=1715190550
New Ship Classes had a mod for different shipsets but I didn't find it, either it's taken down, or just didn't come up in the search and isn't hosted by CaptainX3.