Store Page
Transport Fever>  Workshop > killakanz's Workshop
This item has been removed from the community because it violates Steam Community & Content Guidelines. It is only visible to you. If you believe your item has been removed by mistake, please contact Steam Support.
This item is incompatible with Transport Fever. Please see the instructions page for reasons why this item might not work within Transport Fever.
Current visibility: Hidden
This item will only be visible to you, admins, and anyone marked as a creator.
Current visibility: Friends-only
This item will only be visible in searches to you, your friends, and admins. 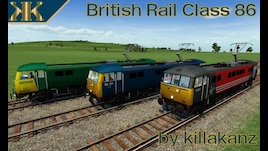 This item has been added to your Subscriptions. Some games will require you to relaunch them before the item will be downloaded.
In 1 collection by killakanz
killakanz's Transport Fever mod collection

The British Rail Class 86 is a class of electric mixed traffic locomotives built in the 1960s to replace steam power on the newly electrified West Coast Main Line.

100 of them were built, making them the most numerous type of electric locomotives built for Britain's railways. When British Rail was privatized in the mid 1990s, the whole fleet of Class 86 locomotives were passed on to several operators. They have been gradually withdrawn by most operators since 2003, being replaced by more modern locomotives such as the Class 66 or Class 90. However Freightliner continues to operate 19 of them today, with several more in "warm storage" that could be returned to service if needed.
Some of the withdrawn examples were sold overseas; 7 went to Bulgaria and 24 to Hungary.
3 have entered preservation.

Massive thankyou to PaTrond, OlaHaldor, OnionJack and TomDotio for banding together and getting me Substance Painter! Hope I did you guys proud with this one :)


If you like my work, please support me through Patreon!

[www.patreon.com]
Or you can donate instantly and directly through paypal!

killakanz  [author] Apr 13, 2019 @ 1:50pm
@Pdguru that error means there's no electric trains on the route you're replacing on or there's missing electric line somewhere. Make sure the entire line you want them to run on is electrified including the connection to a depot.

killakanz  [author] Dec 18, 2017 @ 2:27am
What he's specifically asking for is a class 142 pacer, though frankly I have far more useful vehicles on my to-do list. You guys will just have to make do with the Class 101 for now, or use BritishTrains' Class 156 from Train Fever...